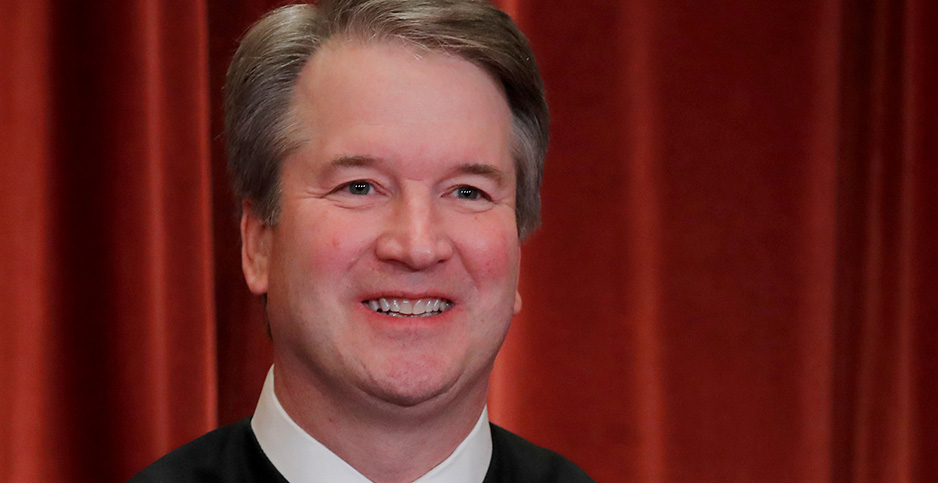 A recent opinion by Justice Brett Kavanaugh could be a sign the Supreme Court will consider the scope of authority Congress delegates to federal agencies. Jim Young/REUTERS/Newscom

How much authority should federal agencies have in shaping regulations like the Clean Power Plan, and how much of that work should fall to Congress instead?

Some legal experts say that question could become a focus for the Supreme Court’s conservative majority now that Justice Brett Kavanaugh has signaled interest in reconsidering the scope of agency powers (Greenwire, Nov. 25).

Court watchers say Kavanaugh’s addition to the bench could open the door to a revival of the long-dormant nondelegation doctrine, which prevents Congress from handing off policy decisions to federal agencies.

The return of the doctrine, which the court has not used to scrap an agency rule since 1935, could pose a threat to greenhouse gas regulations, said UCLA law professor Ann Carlson.

"The basic idea is that if Congress hasn’t specifically addressed a question, then for an agency to take up that question and regulate on it — particularly when there has been a relatively large passage of time since Congress spoke — it shouldn’t and can’t do so, at least in expansive ways," Carlson said.

Litigation over the repeal and replacement of the Clean Power Plan could test conservative interest in bringing the nondelegation doctrine back into play.

Critics of the Obama-era Clean Power Plan have argued that EPA overstepped its authority when it drafted a rule to systematically slash emissions from power plants. Under President Trump, the agency has ushered in the less-stringent Affordable Clean Energy rule and has asked a lower court to find that the 2015 regulation was not allowable under the Clean Air Act (Energywire, Nov. 5).

Although the Supreme Court can only take a small number of cases each term, observers largely anticipate that the justices will eventually weigh in on the issue.

If it does, Kavanaugh last month offered a fresh piece of evidence that the justices may be open to limiting the authority of federal agencies like EPA.

The newest member of the Supreme Court wrote that while he agreed with his colleagues’ decision not to take up a recent petition centered on nondelegation claims, Justice Neil Gorsuch’s "scholarly analysis" in a related case "raised important points that may warrant consideration" in the future.

That case, Gundy v. United States, went to argument before Kavanaugh was confirmed to the court.

"That suggests now that there are five justices who want to revive the nondelegation doctrine," Carlson said. "That could have profound consequences for agencies, but how profound really depends on the actual decision being rendered on nondelegation grounds."

Jonathan Adler, an environmental law professor at Case Western Reserve University, also said Kavanaugh’s opinion was significant because it suggested support for reviewing the scope and authority of agencies.

"I think the majority on the court is wary of agencies having too much discretion or too much ability to make broad policy choices, but precisely how that is going to manifest itself is something we’re going to have to see," Adler said.

As a judge on the U.S. Court of Appeals for the District of Columbia Circuit, Kavanaugh favored a very narrow reading of the landmark 2007 climate case Massachusetts v. EPA, which paved the way for Obama’s EPA to draft the Clean Power Plan and other climate rules, Carlson said.

"I think it’s safe to predict that had he been on the court at the time, he would have ruled against Massachusetts" and other states that called on EPA to regulate emissions, she said.

But Adler said revival of the nondelegation doctrine is far from the greatest threat to climate rules like the Clean Power Plan.

Well before Kavanaugh weighed in on the nondelegation doctrine, EPA would still have had a hard time placing "meaningful limitations" on greenhouse gas emissions without climate legislation, Adler said.

The Supreme Court in the 2014 case Utility Air Regulatory Group v. EPA "made that clear that most of the relevant portions of the Clean Air Act are not written in ways that easily apply to greenhouse gases, and the Supreme Court made clear in UARG that EPA couldn’t try to ignore that in developing regulations," Adler said.

Kavanaugh has not offered specific views on how the nondelegation doctrine should be applied. But his November concurrence did raise questions about whether the court could block EPA from regulating fine particulate pollution, which is not explicitly listed in the Clean Air Act but whose regulation is critical to protecting public health, Carlson said.

Adler said he doesn’t think the Supreme Court will go that far.

"I think that we should expect the court to be more suspicious of new assertions of authority than the continuation of long-standing ones," he said.

He noted that former Chief Justice William Rehnquist, who sought to revive the nondelegation doctrine in 1980, struck down claims to overturn the National Ambient Air Quality Standards in the 2001 case Whitman v. American Trucking Associations Inc.

The unanimous decision "pretty much buried the notion that entire regulatory schemes could be struck down on nondelegation grounds," Percival said.

"What I see now is the danger that if the Democrats sweep control of Congress and the presidency in the 2020 elections, that the new conservative majority on the court may focus on future legislation that is adopted and require more and more specificity," he said.

A revival of nondelegation claims doesn’t mean agencies like EPA would be robbed of discretion to act, but that Congress would make the "fundamental legislative choices," Adler said.

That could be a good thing, he added.

"Congress could certainly identify criteria on which the regulations would be based, and that’s the way the democratic process is supposed to work," Adler said.

"The legislature is supposed to be making the big policy judgments."

Kavanaugh and the rest of the Supreme Court’s conservative wing have not said how exactly they would handle nondelegation claims.

"We now know that there are five votes for changing the current approach," said Daniel Farber, a law professor at the University of California, Berkeley. "We don’t know whether they will all come to an agreement about what will replace it. It doesn’t sound like they necessarily will."

Percival said he saw some variation of opinion among the court’s members. He noted that Thomas, in a concurring opinion in American Trucking, said that regulations — like Clean Air Act rules — that affect the entire economy should be subject to more rigorous judicial review.

"That’s something that Kavanaugh in particular has picked up on and that he mentions in his concurrence," Percival said.

It’s also not clear how the chief justice would handle nondelegation claims. While Roberts signed on to Gorsuch’s opinion in Gundy, Percival said the sex offender law at issue in that case was much less specific than the Clean Air Act.

Farber said Kavanaugh’s opinion wasn’t as radical as that of Gorsuch’s in Gundy, where he said Congress should only delegate discretion to make rules under very limited circumstances where "the agency would be making a factual determination or just filling in the details."

"It’s just not clear how many environmental statutes would actually survive," Farber said. "It depends on how strict you are going to be in defining what is a detail and what is factual."

Kavanaugh’s opinion does not appear to threaten regulatory actions that an agency has been carrying out for a long time, such as setting national air quality standards, Farber said. But it is one indication that the court could push Congress to take a bigger role in federal decisionmaking.

"What we do know is that under any of these approaches, agencies like EPA will have their authority curtailed in some circumstances," Farber said.

"And given the fact that it is so hard to get new legislation through Congress, that means that it’s going to be really hard to do a lot of what we’re hoping they’ll do."