Kavanaugh shortchanges ‘people on the other side’ — witness 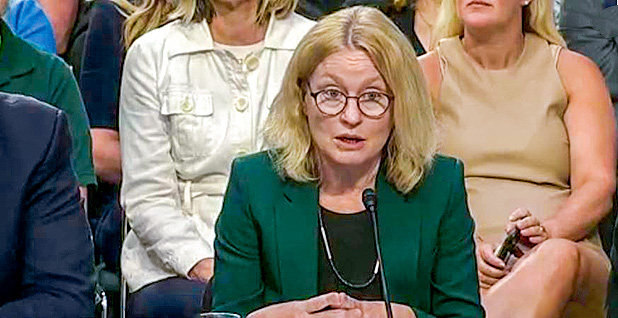 It was a wonky discussion to cap off a week of fiery debate over President Trump’s nominee to the Supreme Court. Kavanaugh has spent 12 years as a judge on the U.S. Court of Appeals for the District of Columbia Circuit, a court with a particularly heavy caseload of administrative litigation.

Many of those cases involve energy and environmental policy, and critics are concerned Kavanaugh favors big businesses over environmental protections. His record includes a number of big opinions questioning EPA’s authority to enact regulations.

Georgetown University law professor Lisa Heinzerling, a witness called by Judiciary Committee Democrats, framed the issue as a question of Kavanaugh’s views of liberty. His opinions striking down regulations focus more on the liberty of regulated industries than on the individuals that regulations are designed to protect, she said.

"The people who are protected by those rules are the ones who are left unprotected when Judge Kavanaugh says that Congress has no authority to grant that broader power or to give the power, for example, to an independent agency," she said during an exchange with Sen. Sheldon Whitehouse (D-R.I.). "And we don’t hear about that in his opinions at all. We only hear about the liberty of the regulated groups, so I wonder to what extent he thinks about the people on the other side."

Earlier in the week, Kavanaugh defended his environmental record with a list of cases in which he sided with EPA (Greenwire, Sept. 5).

Heinzerling pushed back Friday, saying Kavanaugh’s examples were small decisions that are overshadowed by his more sweeping rulings against environmental protections in other cases.

"He’s issued a number of major decisions narrowing the environmental laws, requiring a cost-benefit balancing in the face of either clear or arguably ambiguous language, and he has forwarded this message from case after case — in the big cases," she said.

White is executive director of the C. Boyden Gray Center for the Study of the Administrative State at George Mason’s Antonin Scalia Law School. He praised Kavanaugh for recognizing the burdens regulations can impose on regular people.

"Knowing that regulatory power has significant impacts on, not just big corporations, but on landowners, homeowners, farmers, that’s important as well," he said.

Kavanaugh returned to that theme often throughout the week, touting cases in which he struck down protections for an endangered shrimp in favor of landowners and affirmed a lumber company’s right to challenge protections for another species.

Sen. Mazie Hirono (D-Hawaii) said his record appeared lopsided on the issue of legal standing. She argued that Kavanaugh took a broad view of standing when it came to manufacturers concerned about an EPA regulation but a narrow one when a consumer advocacy group pushed for stricter auto safety standards.

Heinzerling said the pattern makes it harder for environmental groups to get to court than industry litigants.

One Friday witness also took aim at Kavanaugh’s approach to litigation over an EPA rule for cross-state air pollution. In 2012, he authored the decision finding that part of the rule exceeded the agency’s authority.

Hunter Lachance, a 15-year-old from Maine who has asthma, testified that Kavanaugh’s approach would contribute to worse air pollution in downwind states like his.

"I am deeply concerned that if Judge Kavanaugh is on the Supreme Court, he would vote to weaken laws that protect my health — because he already has," he said.