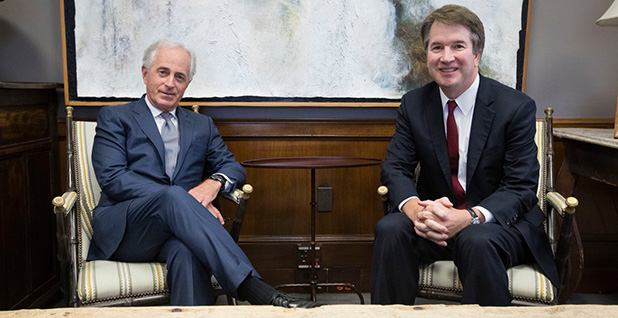 The confirmation process for Brett Kavanaugh is chugging along as the Supreme Court nominee late last week submitted a lengthy questionnaire to senators.

The 110-page document includes information on Kavanaugh’s history with the George W. Bush administration and his years as a prominent conservative judge on the influential U.S. Court of Appeals for the District of Columbia Circuit.

Earlier this month, President Trump tapped Kavanaugh to fill the seat of retiring Justice Anthony Kennedy. The questionnaire is a key step on the way toward the Senate Judiciary Committee holding a hearing.

Republicans are hoping to confirm Kavanaugh by the beginning of the Supreme Court’s October term, but many Democrats have already staked out opposition to the nominee.

Here are some things we learned:

Kavanaugh views his 2014 dissent calling out EPA for failing to consider the costs of landmark mercury regulations for power plants as one of his top 10 most significant opinions on the D.C. Circuit.

He wrote, "In my view, it was unreasonable — and therefore unlawful under the Administrative Procedure Act — for EPA not to consider the costs imposed by regulations in determining whether such regulations were ‘appropriate and necessary.’"

The case was among nine times Kavanaugh identified the Supreme Court adopting his reasoning: In 2015, justices "agreed with my position that the statute requires consideration of costs."

Kavanaugh identified 307 opinions, including concurrences and dissents, he authored on the D.C. Circuit. Of that total, according to the nominee, "only one opinion has been reversed in part by the Supreme Court."

The case: a challenge to an Obama-era rule for regulating air emissions that cross state lines. In 2012, Kavanaugh penned the majority D.C. Circuit opinion finding that EPA had exceeded its authority with the rule; the Supreme Court in part overturned the ruling in a 6-2 decision.

Kavanaugh, though, noted that the late Justice Antonin Scalia and Justice Clarence Thomas penned a dissent "agreeing fully with my majority opinion."

Kavanaugh is concerned with the state of the administrative state and has devoted many speeches and articles over the years to his views on separation of powers and the executive branch.

On several occasions, he’s raised concerns with agency deference doctrines, including the Chevron doctrine, under which courts defer to reasonable agency actions when Congress has been silent or ambiguous on a topic. But unlike some Supreme Court justices, Kavanaugh has not called for the doctrine’s full repeal.

Kavanaugh revealed he has recused himself from many cases during his 12 years on the D.C. Circuit.

For some cases, including massive litigation over an Interior Department land buy-back program for tribes, Kavanaugh recused himself because they involved issues or individuals from his time working for the Bush administration.

In other cases, such as litigation over the Purple Line rail project in the greater D.C. area, Kavanaugh said he had a relationship or contact with an attorney or party involved.

But he also recused himself from several cases on his own motion, without giving any reasons. They include: litigation over an earlier iteration of the interstate pollution rule, a 2006 lawsuit filed by New York seeking to force EPA to regulate carbon dioxide emissions from power plants and several transmission cases against the Federal Energy Regulatory Commission.

Confirming he was considered a front-runner early on, Kavanaugh said the White House first reached out to him about the Supreme Court vacancy on June 27 — the day Kennedy announced his retirement from the bench.

White House counsel Don McGahn called the prospective nominee in the late afternoon that day, and the two met in person on June 29. Kavanaugh then met with Trump on July 2 and Vice President Mike Pence on July 4.

The D.C. Circuit judge accepted the nomination at a meeting in the evening of Sunday, July 8, with Trump and the first lady, Melania Trump. The president announced Kavanaugh’s nomination in the White House East Room the following day.

Along with the 110-page questionnaire, Kavanaugh submitted 6,048 pages’ worth of appendices. The lengthy questionnaire bears out concerns expressed by Democrats and some Republicans about the sizable paper trail following Kavanaugh, not only because of his dozen years on the D.C. Circuit but also his work for the Bush administration and as a lawyer assisting independent counsel Ken Starr in his investigation of President Clinton.

Democrats have insisted that the White House make available all relevant documents from Kavanaugh’s career, but Republicans have accused Democrats of using documents as a way to slow down the nomination.

"It is likely that even under a conservative estimate," Sen. Mike Lee (R-Utah) said last week, "that we’re going to end up with three, four or five times the number of pages than we’ve ever had for any nominee before this committee."