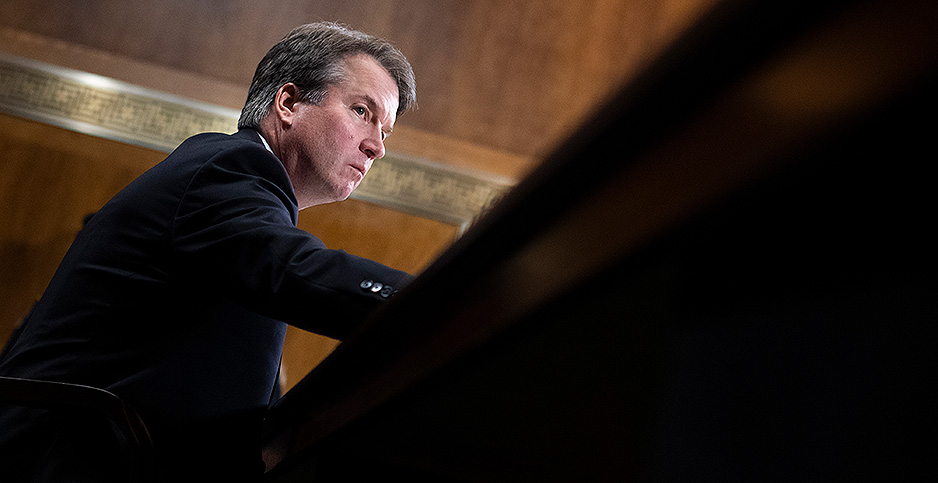 In a major Clean Water Act opinion yesterday, Justice Brett Kavanaugh may have signaled how he would rule in a future battle over the definition of the waters of the U.S., or WOTUS. Kavanaugh is pictured at his Senate confirmation hearing. Tom Williams/CQ Roll Call/Newscom

The Supreme Court’s newest justice yesterday waded into the murky waters of Clean Water Act law and may have hinted at where he would come down when other more high-profile cases reach the high court.

In County of Maui, Hawaii v. Hawai’i Wildlife Fund, the court struck a middle ground on the question of whether pollution that flows through groundwater into a protected waterway requires a Clean Water Act permit.

Justice Brett Kavanaugh was one of six justices who said permits are required if the pollution at issue amounted to the "functional equivalent" of a direct discharge (Greenwire, April 23).

Still, he wanted to "emphasize" a few points. To do so, he harked back to one of his predecessors on the court: Justice Antonin Scalia.

That case was critical to the Clean Water Act. It concerned the entire scope of what waterways, marshes and wetlands qualify for protections under the law.

Scalia took a narrow view in an opinion that garnered four votes — not a majority. But it has since become the basis of the Trump administration’s recently finalized Navigable Waters Protection Rule (Greenwire, April 21).

Kavanaugh’s reliance on Scalia’s opinion, some experts said, signifies he will likely be a reliably conservative vote if and when the Trump rule — or any other regulation defining waters of the United States — reaches the high court.

"He went out of his way to really focus on Scalia’s language in the plurality decision, more so than the majority decision," said Mark Ryan, a former Clean Water Act attorney in EPA’s Region 10.

"That indicates where he is going to be placing a lot of his reliance when and if the WOTUS rule ever comes back before the Supreme Court," Ryan said, using the Obama-era acronym for the rule.

A lot could happen before the justices have a chance to review the Trump administration’s WOTUS rewrite, said Larry Liebesman, a former Justice Department attorney who now works at the consulting firm Dawson & Associates.

If President Trump loses his bid for reelection, a new administration could wipe out the rule and start on yet another round of revisions. If the Trump rule survives, Liebesman said, there are still uncertainties about how the litigation would develop.

But if the justices eventually review the rule as it currently stands, he continued, Kavanaugh may have tipped his hand on how he would rule.

"If WOTUS got up to the Supreme Court in its current form, he may lean toward EPA’s current interpretation under the Trump rule," Liebesman said.

Kavanaugh’s three-page opinion quickly makes three points. For two of them, he seeks to underscore that the court’s decision is consistent with parts of Scalia’s Rapanos decision.

"Under Justice Scalia’s interpretation in Rapanos, the fact that the pollutants from Maui’s wastewater facility reach the ocean via an indirect route does not itself exempt Maui’s facility from the Clean Water Act’s permitting requirement for point sources," Kavanaugh wrote.

"The Court today adheres to Justice Scalia’s analysis in Rapanos, on that issue."

Second, Kavanaugh wrote that the decision highlights a source of "vagueness" in the Clean Water Act as to when a pollutant has come "from" a point source.

"The source of the vagueness is Congress’ statutory text, not the Court’s opinion," he wrote, noting that, too, is in line with Scalia’s opinion.

To be clear, the Maui case did not involve broader questions on the Clean Water Act’s reach, and Kavanaugh didn’t veer from the case to address those issues.

The concurrence may also show that Kavanaugh, a young justice at only 55 years old, approaches administrative issues the same way as Scalia, who died in 2016.

Vermont Law School professor Pat Parenteau noted that Kavanaugh has on several occasions pointed to Scalia for inspiration and as a model of what a justice should be.

He agreed the concurrence likely signals Kavanaugh would rely on Scalia’s opinion should another WOTUS case reach the court.

But Parenteau said that on other environmental issues, he may not be a lost cause and notes that, in the Maui case, he ultimately reached the more pro-environment conclusion.

"It’s encouraging that he can be persuaded that the rule of law leads to conclusions that you can call pro-environment and acknowledging that the Clean Water Act has a purpose," Parenteau said.

"He’s still, in my view, a work in progress. We shouldn’t give up on him."