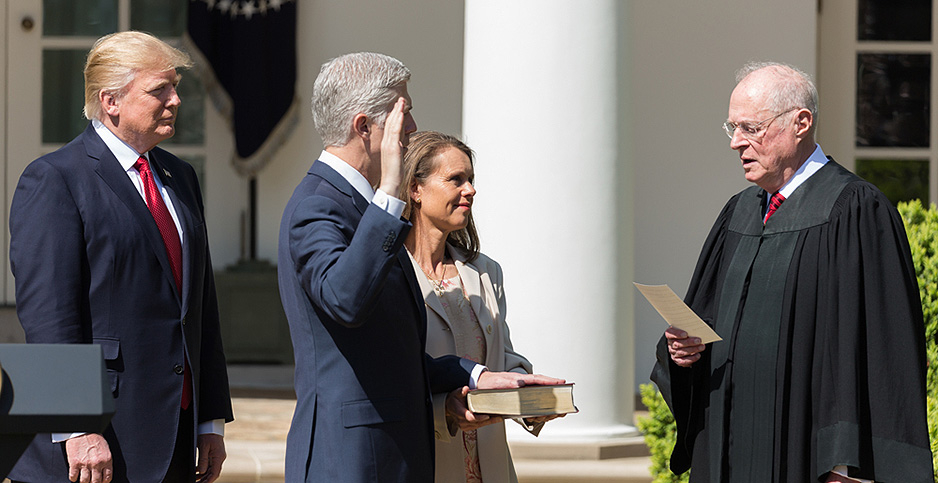 Energy law? Not so much.

While Kennedy played a momentous role in high-profile environmental litigation over the years — often swinging the court to the left — his impact on energy-focused cases was more limited. Most experts expect his retirement to have just a subtle effect on future energy disputes.

"While Justice Kennedy’s retirement will have tremendous consequences on a number of areas of law, I do not believe energy law will be one of them," said Kim Smaczniak, a clean energy attorney for Earthjustice.

"Many of the legal challenges in this area of law are fact-bound, technically complex and do not readily fit into the categories of cases typically picked up by the Supreme Court," Smaczniak said.

"Even if he was replaced by a jurist who had a different perspective on these issues, we might expect these decisions to come out more or less the same way," Eisen said.

Energy lawyers point to three recent disputes that have contoured the modern electric grid and energy regulation during Kennedy’s time on the court.

*Oneok Inc. v. Learjet Inc.: In April 2015, the court voted 7-2 that FERC’s jurisdiction over market manipulation issues did not prevent antitrust lawsuits from moving forward against major energy companies in the aftermath of the California energy crisis. Kennedy joined Justice Stephen Breyer’s opinion for the majority.

"Justice Kennedy was not a swing vote in any of these energy law cases because they weren’t 5-4," Eisen said. "There isn’t a real search for common ground between warring perspectives."

Sharon Jacobs, a law professor at the University of Colorado, Boulder, noted that a rebalancing of the Supreme Court could affect how future energy federalism cases play out. Conflict over state and federal authority over the electric grid is a recurring issue in federal litigation.

While Kennedy is known as a strong advocate for state sovereignty, he joined in the Hughes and EPSA decisions favoring the federal government’s role. Jacobs noted that it’s impossible to know whether Kennedy "played a role behind the scenes in ensuring that the final decisions were adequately respectful of state authority."

"But a new justice with less interest in federalism values could tip the balance further in favor of federal energy regulation," she said. "Or a new justice with an even stronger inclination to preserve state power might join with Justice [Clarence] Thomas in opposing expansive interpretations of federal authority under the Federal Power Act."

Eversheds Sutherland LLP attorney Joseph Hall said that second scenario, a tilt toward states’ rights, will be an issue to watch.

"FERC, EPA, [the Department of Energy] and the states are continually trying to evaluate boundaries as energy and environmental policy and law interface and the federal and state government struggle to evaluate which body has decisional authority," he said. "Increased state rights may drive many strategic energy and environmental policy and legal issues back to the state level from the federal government, where they have been tending to elevate over the last several decades."

“Increased state rights may drive many strategic energy and environmental policy and legal issues back to the state level.”

In other words, a more conservative future court could be less inclined to uphold broad federal policies that aim to help the environment but step on states’ toes along the way. On the flip side, such a court could also be more inclined to support state-level energy programs that land before the court on jurisdictional grounds.

"To the degree environmental groups might hope to leverage a very expansive reading of energy law to achieve their environmental policy goals, having one more justice who adheres to textualism/originalism makes that a less viable strategy," said Clark, a Republican appointee to the commission from 2012 to 2016.

Smaczniak noted that court watchers should also keep an eye on broader legal doctrines — like access to the courts and the high level of deference agencies receive under the Chevron precedent — that could affect future energy cases.

"Access to courts, through standing doctrine and the like, are another cross-cutting area to watch," she said in an email. "But given that these doctrines are well-established and based upon substantial bodies of supreme court caselaw, I’d be surprised if we see any revolutionary changes after J. Kennedy’s retirement."