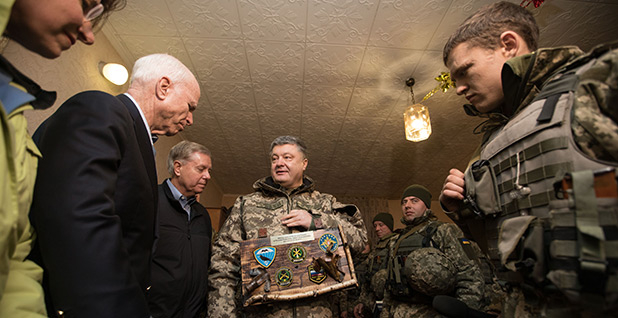 NEW HAVEN, Conn. — John Kerry thinks the United States will meet its commitments under the Paris climate deal even if the Trump administration spends the next few years on the sidelines.

The former senator and Obama administration secretary of State told a small group of reporters here yesterday that he believes cities, states and the markets will deliver the emissions reductions he promised the world outside the French capital in 2015. His comments came on the sidelines of a climate change conference at Yale University this week.

"I believe the United States will meet and conceivably exceed the Paris goals," he said, citing advances in wind, solar and other technologies he said would usher in "exponential" reductions over the next few years.

But Kerry — who is spending his first year outside of the federal government since 1985 — took a dim view of Washington’s role.

He condemned President Trump’s June decision to scuttle the United States’ Paris commitments as a "completely contrived and extremely damaging step" that would hurt U.S. businesses. And he dismissed persistent hints by White House National Economic Council Director Gary Cohn and his team that the president might reconsider U.S. membership in the deal if certain conditions are met.

"It may leave a few people guessing, but it doesn’t buy you back your credibility," said Kerry, in response to questions about Cohn’s meeting Monday with foreign officials in New York. "You can’t run around secretly, quietly, saying to somebody, ‘Wait, maybe we’ll come back.’ That’s not leadership. That doesn’t get you anywhere. And people don’t respect that."

The United States has gone from the leader and convener in international climate negotiations to a country that must be managed, he said.

"Countries are deeply rattled by the uncertainty, inconsistency and doubt. And they’re counting the days," he said.

Kerry, a longtime Massachusetts Democratic senator who in 2009 and 2010 led an effort to pass carbon cap-and-trade legislation, said he has little hope that Congress will renew that effort anytime soon. Congress, he said, "needs to make itself relevant to life in America again."

But despite this pessimism about Washington, Kerry stocked the two-day conference he hosted at his alma mater Monday and yesterday with conservative former statesmen and drew on old Capitol Hill friendships to deliver pro-climate-action comments from two current Republican senators: John McCain of Arizona and Lindsey Graham of South Carolina.

Graham used the forum to make an announcement: He’s working with a Democrat to draft climate legislation.

In a recorded message played during an afternoon session yesterday, Graham announced that he is working with Sen. Sheldon Whitehouse (D-R.I.) — whom he called "a very practical, progressive Democrat" — on legislation to price carbon.

"I believe that the greenhouse gas effect is real, that CO2 emissions generated by man is creating our greenhouse gas effect that traps heat, and the planet is warming," he said on the video. "I’m looking for a solution that is pro-business, and we need to get to the bottom of the problem."

Whitehouse and Sen. Brian Schatz (D-Hawaii) introduced their bill two months ago at the conservative American Enterprise Institute in Washington, D.C., while inviting Republican input. It’s not clear if Graham will add his name to their bill or draft a new one with Whitehouse. The offices of Graham and Whitehouse did not respond to requests for comment.

It’s not the first time Graham has joined a bipartisan effort at comprehensive climate legislation. He partnered with Kerry and then-Sen. Joe Lieberman (I-Conn.) on a cap-and-trade bill during the Obama administration but abandoned the project days before the trio had been set to release their draft. He’s generally shied away from the issue since, sometimes telling the media he had doubts about the extent to which humans cause warming.

Asked what lessons he drew from the failure of his bill with Lieberman, Kerry said yesterday that he doesn’t regret any particular mistake.

"We actually did a lot right," he said.

He said 55 senators promised to vote for the bill, including McCain — a head count that wasn’t public at the time. The bill never received a vote on the floor.

Kerry blamed the bill’s demise on Peabody Energy Corp.’s targeting of Graham and others and on the BP PLC Deepwater Horizon oil spill, which stripped the project of some of its energy industry support and sucked up political attention.

Graham at the time blamed his own defection on then-Senate Majority Leader Harry Reid (D-Nev.), who signaled that spring that he would move immigration legislation before the climate change bill even though the House had already passed cap and trade narrowly the previous year. The move exposed Graham, who was working with Democrats on immigration, as well, and undercut the effort, according to the South Carolina Republican.

Graham said in his video message that a price on carbon could generate funds for infrastructure while making renewable energy and nuclear power more viable. "I think we can do this in a business-friendly manner," he said.

Returning to ‘days of rage’?

McCain made a more general plug for climate action, coupled with a plea for bipartisan cooperation to avoid the deep divisions that characterized the years around the Vietnam War. He recalled how he and Kerry made common cause on lingering issues around the war they both fought in.

"Right now, we are very divisive," he said of the current political climate. "We don’t want to go back to the days of rage, so let’s all work together."

Former Secretary of State James Baker, who served under President George H.W. Bush, joined Kerry at Yale to tout his own proposal for a revenue-neutral carbon tax that, unlike the one contemplated by Graham and Whitehouse, would return revenue to the public in the form of dividends rather than spending it.

Asked whether he thought the increased prevalence of disastrous storms like Hurricane Harvey would convince Republicans of the need to address climate change, Baker said, "no."

Political divisions coupled with a lack of GOP-friendly options for confronting climate change are keeping conservatives from acknowledging it is occurring, he said. More data points won’t help.

"I don’t understand why we can’t recognize the divisiveness of this debate, just like immigration and health care, is such that we need to find solutions that don’t require one side or the other to say ‘OK, the other side was right,’" he said.

He predicted that the Graham-Whitehouse effort would be complicated by questions about how the money would be spent and whether that would grow the government. He proposed they avoid that by disbursing it to the public instead, as his draft with George W. Bush-era Treasury Secretary Hank Paulson and Reagan-era Secretary of State George Shultz would do.

Kerry — who volunteered for the first Earth Day as a young man, recently returned from a trip to Vietnam and has generally approached climate change as an environmental and humanitarian issue — took care to cast it as an economic one throughout his Yale conference.

Trump was unwise, he said, to undercut U.S. companies by leaving the Paris deal. International energy infrastructure that might have been built by U.S. companies will now more likely be developed by companies from countries that have joined most of the world in accepting the Paris accord, he said.

"It makes it harder for our companies," he said. "They have to go out and fight against the perception that America’s a laggard."

Kerry said he regrets that the United States hasn’t worked more closely with China on international development, saying such a partnership could have been "planet-changing."

Republicans including Baker have said China’s Paris pledges might never be delivered. But analysts say China’s business-as-usual trajectory has it peaking its emissions years before the promised 2030 date.

"There’s no grass growing under the feet of the Chinese," said Kerry. "They’re moving."