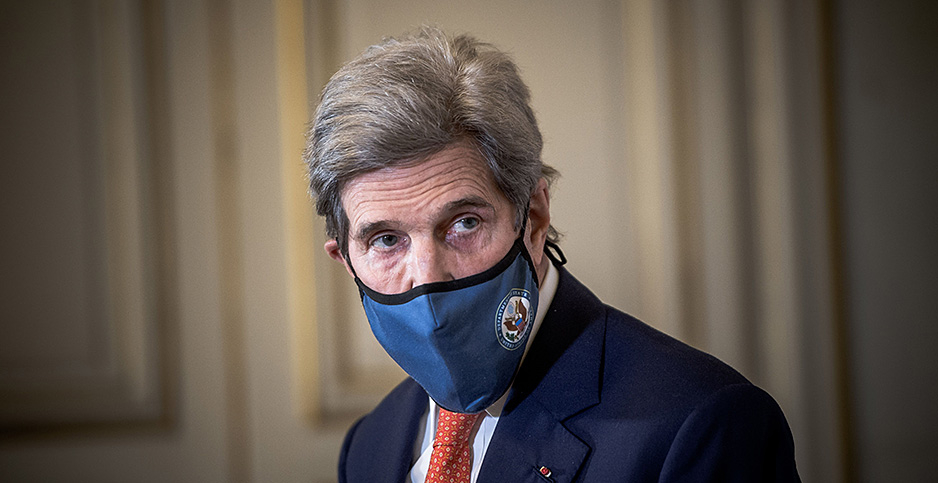 John Kerry’s skills at statecraft will be tested this week as he pushes China to strengthen its actions against climate change.

The U.S. climate envoy arrived in Shanghai yesterday, a week before President Biden hosts a virtual international climate summit as he attempts to recapture U.S. leadership on global warming.

During his breakneck tour, Kerry will meet with senior Chinese officials including his counterpart Xie Zhenhua, who helped shape the climate negotiations in 2015 that led to the Paris Agreement. Kerry will also make a stop in South Korea.

The trip is complicated by China’s record of human rights abuses, a factor that critics say should not be overlooked as the Biden administration seeks help from China to curb global emissions. Kerry’s visit overlapped with testimony in Congress by U.S. intelligence officials who described the country as a dangerous adversary of the United States.

Kerry insisted in an interview with The Wall Street Journal that the U.S. would not trade away its leverage on human rights issues and economic concerns to get a deal on climate change.

Kerry is likely to push China for stronger commitments around stopping its build-out of coal plants at home and ending its coal financing overseas, observers say. He’s also expected to pressure China to move up its 2030 target for reaching peak carbon emissions.

A spokesperson from the State Department noted that while Chinese President Xi Jinping has committed to achieve carbon neutrality before 2060, China has not yet set a path toward meeting the Paris Agreement goal of limiting global temperature rise to 1.5 degrees Celsius.

"We must insist Beijing do more to reduce emissions and help tackle the worldwide climate crisis," the spokesperson said. "We cannot successfully address the climate challenge without significant additional action by China."

China and the U.S. are the world’s largest emitters of greenhouse gases.

Kerry’s visit to China will be the first by a senior Biden administration official. Sally Yozell, director of the Stimson Center’s environmental security program and a former senior adviser to the State Department, said the trip conveys the importance of climate change as a foreign policy priority.

"It speaks volumes to what the Biden administration sees as a major, defining security issue not just for the future of the United States but the globe," she said. "We’ve never seen that kind of effort ever on any one issue that I can recall in my many years working on policies."

She said Kerry will likely seek to move up the timetable on China’s promise to become carbon neutral. But the visit could also allow the two sides to talk about other areas of collaboration on climate.

"Reducing carbon and addressing climate change can really be a win-win when you think about moving to renewable energy and innovative technologies and green technologies," she said. "It can really be the biggest economic transformation any of our countries have seen since the Industrial Revolution."

Kerry’s visit follows a contentious gathering in Alaska last month between Secretary of State Antony Blinken and his counterpart Yang Jiechi, where the two sides traded barbs over human rights, democracy and cybersecurity.

During a press briefing yesterday to discuss the Biden summit, former White House chief of staff John Podesta said China and the U.S. have to find a way to reduce their emissions. But he said it won’t be as easy as when Kerry was secretary of State.

"Nevertheless, I think the United States believes that China has to be an important and positive player in the climate debate," Podesta said.

The difference between then and now, he added, is that climate no longer serves as the stabilizing anchor in the bilateral relationship.

Alden Meyer, a senior associate with the think tank E3G, said Kerry’s active diplomacy is to be expected ahead of next week’s summit. But he, too, acknowledged the complicated relationship Washington has with Beijing.

"China, I think, feels the U.S. needs to catch up," Meyer said pointing to the U.S. backing away from the Paris Agreement during the Trump administration, and Biden not yet announcing his 2030 carbon goals under that accord.

"China feels it’s meeting and even exceeding the commitments it made under Paris, which is true," he added. "But on the other hand, everyone says China can and should do more to increase its ambition."

He thinks part of the diplomacy around India, South Korea, Japan and other countries is aimed at getting those countries to raise their climate ambitions, while indirectly putting pressure on China to follow suit.

Meyer doesn’t expect a joint announcement following Kerry’s visit. The key is for the U.S. and E.U. to be on the same page when it comes to communicating expectations to China, he said. But Kerry’s visit is still a signal of good news.

"The reality is it’s in China’s own interest to take more aggressive action because the impacts of climate change are pretty severe on China as we’re seeing with desertification and coastal typhoons and floods and droughts," Meyer said. "And also, China has a lot to gain in the transition to decarbonizing the global economy."