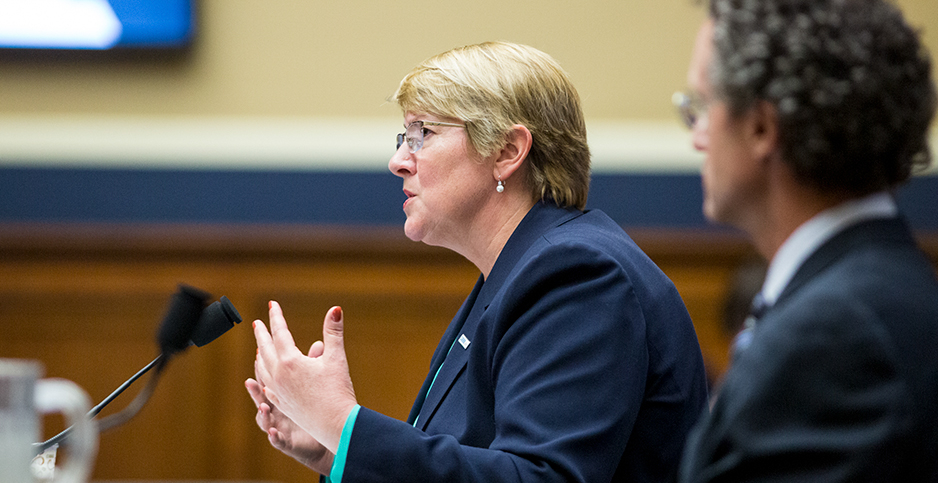 Regulators and other observers anticipate that Heidi King, a chief architect of President Trump’s rollback of clean car standards, will soon leave the administration.

King, who currently serves as deputy administrator of the National Highway Traffic Safety Administration, could exit as soon as next week, according to four sources familiar with the matter.

"I heard (not from her) but I don’t know why [or] where she is going," California Air Resources Board Chairwoman Mary Nichols said in an email to E&E News.

"Could be a promotion based on her fine work on the standards," quipped Nichols, who opposes the rollback.

NHTSA did not respond to a request for comment.

As the No. 2 political appointee at the agency, King has played a leading role in proposing to dial back Obama-era corporate average fuel economy (CAFE) standards.

Along with EPA, NHTSA is proposing to freeze CAFE standards at 2020 levels through model year 2026. That would allow cars to travel 35 mpg on average by 2025, rather than the 50 mpg mandated by President Obama.

King has been a steadfast proponent of the administration’s argument that freezing the standards would increase safety on the nation’s roads. She has testified before Congress that the freeze would encourage people to ditch their older cars and purchase newer, safer models. Critics say that argument has been debunked by the International Council on Clean Transportation, a group that helped expose the Volkswagen AG emissions cheating scandal.

NHTSA has been without a permanent head since Mark Rosekind stepped down shortly before Trump’s inauguration. Trump first tapped King to lead the highway safety agency in April 2018, but her nomination has languished in the Senate. In the meantime, she’s occupied the No. 2 role.

If King were to leave the administration soon, she would join a growing exodus of political appointees who worked on the car rules rollback.

Jeffrey Rosen, deputy secretary at the Department of Transportation, left his post earlier this year to serve as the No. 2 official at the Justice Department. He and King were said to have spearheaded DOT’s portion of the rollback (Greenwire, July 31, 2018).

Unlike those other officials, though, King would depart the administration with little unfinished business. EPA and NHTSA sent a draft of the finalized rollback to the White House Office of Information and Regulatory Affairs last week, wiping their hands of the controversial proposal. The final rule is expected to be released in September or October.

"Have also heard rumors about her departure. Unfortunately the decisions on the car rule are made and her departure will make no difference in the outcome of the final rule," Margo Oge, the former head of EPA’s transportation office, said in an email.

King previously served as the chief economist for the House Energy and Commerce Committee and as a regulatory policy analyst at the White House Office of Management and Budget.

She also worked in the private sector for Telcordia Technologies, Pfizer Inc. and, most recently, General Electric Co., where she was global director of environmental health and safety risk from 2013 to 2016.

A native of Ventura, Calif., she obtained a bachelor’s degree at the University of California, Irvine, and a master’s in economics from the California Institute of Technology. She also worked as a California park ranger.

Despite her connection to California, King advanced a proposal that stands to undercut the Golden State’s efforts to address planet-warming pollution from cars and trucks.

Under Section 177 of the Clean Air Act, California can obtain a waiver from EPA to set tougher tailpipe pollution rules than the federal government. Fourteen states have adopted those tougher rules, representing more than 35% of U.S. vehicle sales.

As part of the rollback, EPA and NHTSA are proposing to revoke California’s Clean Air Act waiver. That’s never been done before, and it’s certain to attract legal scrutiny.

‘I’m not a climate scientist’

King found herself in hot water at times with Democrats on Capitol Hill.

During her confirmation hearing before the Senate Commerce, Science and Transportation Committee last spring, Sen. Maggie Hassan (D-N.H.) got into a tense exchange with the nominee over climate science (E&E Daily, May 17, 2018).

Hassan asked King if she agreed with the scientific consensus that human-caused climate change is real and needs to be addressed.

King responded: "I agree that it’s very important for experts to speak on the issue. I apologize, I’m not a climate scientist, but I have great respect for the discipline."

Hassan grew visibly annoyed and shot back: "I’m not a climate scientist, either, and I am very comfortable saying that the overwhelming amount of evidence that I read … confirms that climate change is real. And I’m a little bit concerned, and I think other people will be, too, that you seem unwilling to acknowledge that the evidence is there."

More recently, Democrats on the House Energy and Commerce Committee implored King to alter the car rules rollback in order to avert years of litigation and regulatory uncertainty for the auto industry (E&E Daily, June 21).

King responded by framing lawsuits as inevitable. "In my experience, these rules tend to go to the courts regardless," she said.

Also testifying before the E&C panel that day was Wehrum, the EPA air chief. Wehrum gave no public indication at the hearing of his plans to resign. But a little more than a week later, he abruptly exited the administration, leaving King to shepherd the rollback to the finish line.