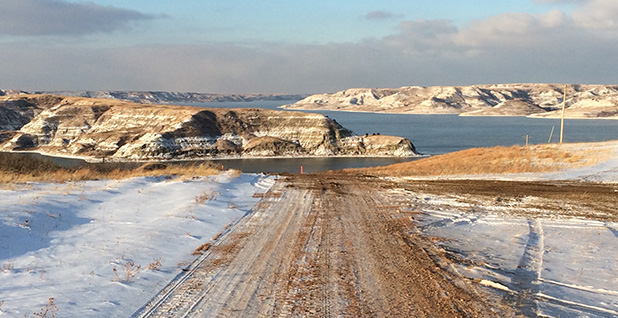 The partial government shutdown has stalled a high-stakes Interior Department’s legal decision about ownership of mineral rights under the Missouri River on Fort Berthold Indian Reservation in North Dakota. Denis Fischer/Bureau of Reclamation/Flickr

A high-stakes decision from the Interior Department over the disputed ownership of minerals beneath the bed of the Missouri River in North Dakota is one example of how the partial government shutdown is dragging out the waiting game.

Almost exactly two years ago, Interior’s then-top lawyer concluded the mineral estate belonged to the Three Affiliated Tribes of the Fort Berthold Indian Reservation rather than the state of North Dakota.

But seven months ago, with Interior under dramatically reshaped political leadership, the department’s senior lawyer said he was "temporarily" suspending and withdrawing the prior legal opinion in order to collect more information (Greenwire, June 11, 2018).

"The underlying historical record should be reviewed and perhaps expanded upon by a professional historian," Principal Deputy Solicitor Daniel Jorjani wrote last June.

Since then, there’s been no public update on either the historical review or, most significantly, the possible revisions to the solicitor office’s legal opinion that will have a meaningful bottom line.

The record-setting shutdown that began Dec. 22 has shackled the solicitor’s office, which employs more than 300 attorneys and about 400 total employees. More than half the attorneys are assigned to regional and field offices.

And the position of solicitor remains vacant, with no nominee at present.

"Most Office employees will be furloughed for the duration of the shutdown," the office’s contingency plan states. "The Solicitor and 12 additional employees would be immediately retained … for response to matters involving the safety of human life or to protect property."

Shutdown-associated work delays, in turn, can amplify what’s already a time-consuming challenge for the solicitor office’s lawyers to resolve intricate legal puzzles — and, even when issued, the opinions are not necessarily the last word.

The Trump administration’s revised Migratory Bird Treaty Act legal opinion narrowed the law’s reach to cover only the intentional taking of a bird, effectively shielding from prosecution energy companies and others that unintentionally kill migratory birds. The legal opinion is now being challenged in court.

"Civil litigation will be curtailed or postponed to the extent that courts will permit such an approach without harm to the interests of the United States," the office’s contingency plan states.

About one-fifth of oil produced in North Dakota comes from lands overseen by the Mandan, Hidatsa and Arikara Nation. The Fort Berthold Indian Reservation spans about 980,000 acres in west-central North Dakota and the energy-rich Williston Basin.

The Three Affiliated Tribes could not be reached for comment today.

The construction of the Garrison Dam in the 1950s created Lake Sakakawea, much of which is located within the reservation’s boundaries. The key question of who owns the underlying minerals "first turns on whether the bed of the Missouri River passed to North Dakota at statehood or was reserved by the United States for the benefit of the tribes," Tompkins noted.

Tompkins’ opinion spanning 60 pages of text and maps touches upon extensive historical references, from the 1851 Treaty of Fort Laramie to a succession of 19th-century agreements and executive orders, that could keep a historian busy for some time.