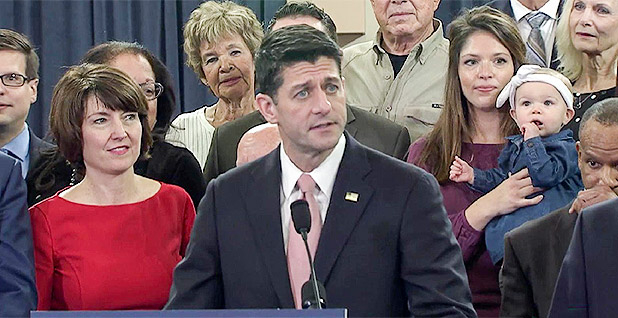 However, the bill would scrap two other oil and gas incentives: the marginal well and enhanced oil recovery credits, he said.

The renewable production (PTC) and investment tax credits (ITC) for wind and solar are retained, along with the phase-down according to a schedule laid out in a 2015 deal, Brady said.

That tweak would increase revenues by $12.3 billion over five years, according to a summary.

In an email, Gregory Jenner, a Stoel Rives LLP partner and former head of the Office of Tax Policy, called the change a "pure revenue grab."

The bill would fully repeal the ITC for commercial properties after 2027, which under current law is reduced to 10 percent after 2021.

The legislation would extend the ITC for fuel cells, small wind, combined heat and power, and geothermal sources.

These "orphan" credits were left out of the 2015 agreement because of what Democrats have portrayed as a drafting error.

The tweaked Section 45J tax credit for advanced nuclear is also in the bill. Members of Georgia’s delegation this week had pressed for the provision with an eye toward helping the ongoing Plant Vogtle project in their state (E&E Daily, Oct. 31).

An extension and tweaks for an existing carbon capture and sequestration tax break that enjoys broad bipartisan support in the Senate is not included in the House bill.

Supporters of that credit are redoubling efforts to see it included in the Senate Finance Committee’s draft, which is expected as early as next week.

The House Ways and Means summary says the "Tax Cuts and Jobs Act" would lower the corporate rate from 35 percent to 20 percent, a top priority of President Trump.

It would also allow businesses to "immediately" write off the full cost of new equipment — a perk that Republicans say would benefit a wide range of businesses, including energy firms, across the board.

The measure would additionally allow the write-off of the cost of state and local property taxes up to $10,000, said the summary.

That was a compromise for Republicans from high-tax states such as New York and New Jersey, who were upset by the elimination of the broader deduction for state and local taxes.

Brady intends to start marking the bill up in committee next week.

Early reaction was mixed. The U.S. Chamber of Commerce applauded the measure, but its statement also acknowledged "more work needs to be done."

Changes to the mortgage interest deduction, which under the House bill is capped at $500,000, prompted the National Association of Home Builders to slam the proposal.

"The House Republican tax reform plan abandons middle-class taxpayers in favor of high-income Americans and wealthy corporations," the group said in a statement.

Oil Change International also criticized the legislation, which it noted was released as the Senate Energy and Natural Resources Committee was holding a hearing on opening the Arctic National Wildlife Refuge to oil and gas drilling.

The ANWR provision is expected to be folded into the Senate’s tax reform bill, which under special budget rules is exempted from a Democratic filibuster.

"The GOP is once again trying to hand the super-rich and their friends in corporate America lavish tax breaks — and they expect us to pay for them by giving up our health care, our safety and our children’s future," said Oil Change International’s U.S. policy director, Janet Redman.

"Republicans want to open up sacred land in the Arctic Refuge for oil drilling allegedly to raise money to cover their cuts," she said, "but they leave in place tens of billions in tax giveaways to oil, gas and coal companies."