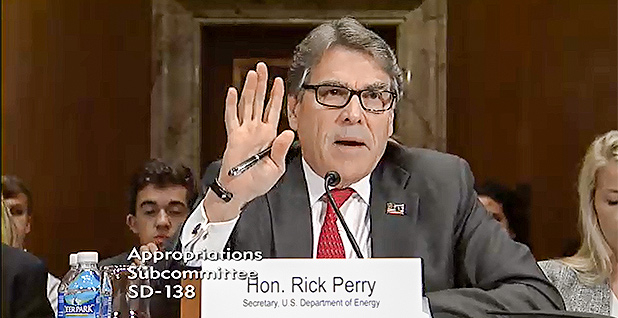 Energy Secretary Rick Perry was back on Capitol Hill yesterday and is set to return today. Senate Energy and Water Development Appropriations Subcommittee

Energy Secretary Rick Perry told lawmakers yesterday he did not have a say on the agency’s fiscal 2018 budget request, which one Republican senator called "especially bad."

Perry’s remarks before the Senate Energy and Water Appropriations Subcommittee provide a partial explanation of why many of the secretary’s initial public policy positions differed sharply from the White House blueprint.

"One of the things I would like to bring to your attention. … I got here on the second day of March, and that budget was already written," Perry said. "My job is to sit here in front of you and robustly defend it, which is what I’m doing."

The $28 billion Energy Department budget request would cut funding for DOE’s Office of Energy Efficiency and Renewable Energy by 70 percent and fossil energy research by more than half.

It would slash the Office of Science by 17 percent and eliminate programs popular with members of both parties, like weatherization assistance.

Alexander told Perry the elimination of ARPA-E is "not what we are going to do."

Alexander said, "Presidential budgets have a pretty bad record in this Congress, whether they come from Democrats or Republicans. This one is especially bad."

He added, "What I try to do is look within the budget and see if there’s anything good in it at all. … Not much here."

Similarly, ranking member Dianne Feinstein (D-Calif.) listed the number of jobs that would be cut at the national labs if Trump’s budget becomes law and said the request doesn’t mirror Perry’s public comments in support of research.

Every non-National Nuclear Security Administration lab would see "drastic" cuts under the spending request, she said. The budget "tells students that scientific research is no longer a priority of the United States," said Feinstein.

As he did earlier this week before House appropriators, Perry responded to repeated questions about proposed cuts by pledging to continue a dialogue with lawmakers and work with them on a mutually beneficial budget.

Perry vowed support for a variety of technologies, including some that could be affected by cuts, like offshore wind and carbon capture and sequestration.

"I have some experience, pretty good experience, of dealing with having to manage big projects and big entities when there is a reduction in the budget," Perry said.

He said about the fiscal blueprint, "I know this is a starting point."

To Sen. Jeanne Shaheen (D-N.H.), who pressed him on the proposed axing of the weatherization program, Perry said it was the view of the administration that some programs could be better run by states.

Shaheen responded, "I think you have a saying in Texas that we also agree with: That dog just won’t hunt."

Perry said, "I know what you mean by that."

Perry echoed comments he made to CNBC earlier this week that he doesn’t believe carbon dioxide is the main driver of climate change (Greenwire, June 19).

Sen. Chris Coons (D-Del.) asked what he needed to hear from scientists and the military to be convinced about the dangers of greenhouse gases. The vast majority of scientists say they are the main driver of climate change.

"My perspective is that it’s not settled science. The idea that if you don’t believe it’s settled science, you are somehow or another a Luddite … I don’t mind being [a] skeptic about things," Perry said.

Perry pointed to the views of former Energy Department Undersecretary Steven Koonin, who wrote an op-ed in The Wall Street Journal last year saying the public is largely unaware of debates about climate science.

Perry told lawmakers he would like to bring in a "red team" of experts to discuss the climate issue and leave politics out of it.

Perry took more grilling on nuclear waste after the issue took center stage at a hearing on the House side. He largely reiterated support for the contentious Yucca Mountain repository, along with saying he would be in favor of moving forward with a private interim storage solution.

Under questioning from Alexander, Perry said that he believes such an interim solution could allow waste to be disposed of more quickly than waiting for Yucca.

But Perry also told the panel no decisions have been made on where that potential interim storage would be and that his agency would need "statutory clarification" before using a private storage site.

"I think the more explicit Congress can be about our authority, I think the clearer that authority will be," Perry said.

The project, which would fabricate weapons-grade plutonium into MOX fuel and irradiate it in commercial nuclear reactors, is "vastly beyond anyone’s wildest dreams of a budget we would be faced with," Perry said.

The project would cost $12 billion more in construction, on top of $5 billion already spent, along with up to $1 billion per year to operate, said Alexander.

"There’s a better way, there’s a cheaper way, there’s a faster way," said Perry, referring to the alternative "dilute and dispose" method, which Trump’s administration, like President Obama’s before it, has proposed using.

Perry and lawmakers seemed to agree the project should be shut down. That may not be the case today as Perry faces the Senate Energy and Natural Resources Committee, including South Carolina Republican Sen. Lindsey Graham, who has vigorously defended MOX.

When pressed on climate change, Perry returned to nuclear and said small modular reactors are a zero-emission technology the U.S. can lead the world in.

"I don’t think there is an issue that has any more potential for this country and the world," he said.