Key Obama-era leasing reform to get the ax 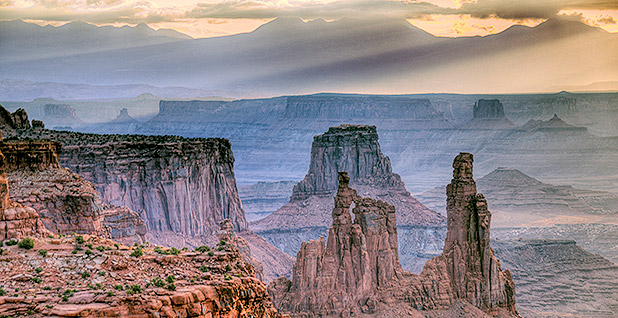 The Interior Department is working to cut the use of master leasing plans, like the Moab MLP approved last year, which helped guide oil and gas development away from Utah's Canyonlands National Park, pictured above. PDTillman/Wikipedia

Among the federal regulations targeted by the Interior Department for elimination is a key Obama-era leasing reform strategy designed to guide oil and natural gas development away from areas with high natural and cultural resource values.

Interior plans to rescind the use of master leasing plans (MLPs), which has allowed the Bureau of Land Management in specific instances to keep energy development away from national parks and other environmentally sensitive areas. The MLPs were a key component of federal onshore leasing reforms the Obama administration rolled out in early 2010.

Interior’s 44-page report, released this week, says the agency is working on "ending" the use of MLPs by year’s end. Instead, BLM will use individual resource management plans to guide where energy development will be allowed on public lands.

The Department of Energy, U.S. EPA and NOAA all released similar reports this week identifying regulatory "burdens" to energy production.

Interior Secretary Ryan Zinke said in a statement this week that the goal of his agency’s report is "streamlining permitting and revising and repealing Obama-era job killing regulations — all while doing so in an environmentally responsible way."

As for MLPs, the report calls for rescinding a 2013 BLM instruction memorandum (IM) that established guidelines "for integrating an MLP into the land use planning process." The IM was included in an agency handbook titled "Planning for Fluid Mineral Resources."

BLM has used MLPs to place sensitive tracts off-limits and to incorporate best management practices, phased development or no surface occupancy mandates for new leases. BLM has developed, or already approved, more than a dozen of these plans across millions of acres in Colorado, Utah and Wyoming.

Among other things, the Moab MLP closed 145,000 acres of federal lands near the Arches and Canyonlands national parks to future mineral leasing, capped well densities on projects in sensitive areas, and placed no surface occupancy restrictions on about 306,000 acres "that are highly valued for scenery and recreation."

BLM, also in December, announced it would develop the Tres Rios MLP in southwest Colorado. The agency said it wanted to balance conservation and drilling activity near Mesa Verde National Park — established in 1906 by one of Zinke’s idols, President Theodore Roosevelt, and renowned for its ancient Puebloan cliff dwellings (Greenwire, Dec. 20, 2016).

But the planned Tres Rios MLP and others will not be moving forward.

"The BLM is currently evaluating existing MLP efforts with the goal of ending this approach," the Interior report says.

BLM "expects to rescind" the 2013 instruction memorandum and revise the BLM handbook on fluid mineral resources "in the first quarter" of fiscal 2018, the report says.

Re-establishing BLM resource management plans "as the source of lands available for fluid minerals leasing" will result "in more streamlined" analysis required by the National Environmental Policy Act. That, in turn, will reduce the amount of time it takes for industry-nominated parcels "to make it to a competitive lease sale," the report says.

"Since extra time and NEPA analysis adds to uncertainty for industry and use of taxpayer dollars by the Department, removing these process-related steps has the effect of decreasing uncertainty," it says.

Ironically, proponents of MLPs say one of their biggest benefits is that they provide more certainty to industry by determining where new oil and gas and mining activity is suitable — and where it is not — thus reducing challenges to leases.

Former Interior Secretary Sally Jewell last year said the Moab MLP, for example, was designed to give the oil and gas and mining industries certainty about where they can develop in a region dotted with Native American cultural sites, popular hiking trails, spires, mesas, natural bridges and arches that draw 2 million visitors a year to Grand and San Juan counties in Utah.

But the oil and gas industry has complained the MLPs are unnecessary and that they restrict access to valuable domestic energy resources.

"It’s not at all surprising that MLPs are included in the burdens report, as they were another layer of NEPA added to the existing four or five layers required before any oil and natural gas development takes place on federal lands," Kathleen Sgamma, president of the Western Energy Alliance, said in an emailed statement.

"The 2010 MLP policy was redundant at the time it was put in place, and it’s fully appropriate that it’s removed now," she added. "BLM has been stymied for years by round after round of NEPA that takes them away from field work and behind their desks pushing paper."

That’s essentially the same reasoning laid out in the Interior report.

The report notes that one "unintended consequence" of the MLPs is that while they are being developed, "many areas open to oil and gas leasing have been deferred from leasing while they await the completion of the MLP process."

Top Interior officials had acknowledged that they were taking a critical look at the MLPs.

"As we look at planning in the department and consider how we can do things more efficiently, we’re evaluating whether the [MLP process] is an added step on top of an existing planning process," MacGregor said at the hearing. "Does it actually increase efficiencies, or is it another step?"

But removing the MLPs is a bad move for public lands and those who want a voice in how they are managed, argued Nada Culver, senior counsel and director of the Wilderness Society’s BLM Action Center in Denver.

"Master leasing plans were created to provide a voice for local and regional interests in how oil and gas is developed, balancing it with protecting our national parks, mountain bike trails and backcountry areas," she said. "Cutting off these ongoing discussions and excluding affected communities from decisions that affect their daily lives sets us back on a path to conflict while risking the other values of our public lands and the vibrant local economies that depend on them."

BLM spokesman Derrick Henry told E&E News that eliminating MLPs won’t change the overall "goal of the BLM’s land-use planning efforts," which he described as focused on being "a good neighbor with the communities we serve."