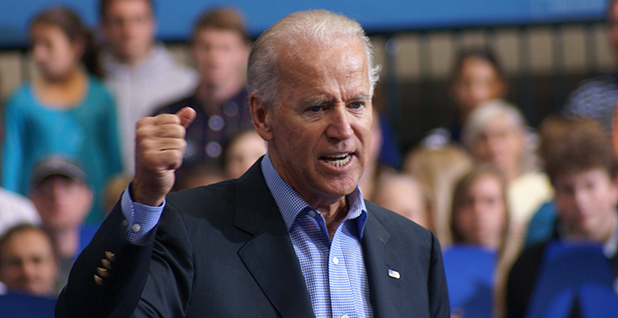 President-elect Joe Biden is planning to revoke the cross-border permit for the Keystone XL oil pipeline on his first day in office, according to transition documents. Marc Nozell/Flickr

President-elect Joe Biden is expected to revoke the cross-border permit for the controversial Keystone XL pipeline as early as his first day in office, restarting political fights over the oil project.

The planned cancellation of the permit signed by President Trump in March 2019 was outlined in transition documents that included other day one steps like rejoining the Paris climate accord, according to multiple media reports yesterday. The plan for the TC Energy Corp. pipeline was not listed on a memo over the weekend from Biden’s pick for White House chief of staff, Ron Klain, but the overview of Biden’s first 10 days said he would take "immediate action" to address four crises, including climate change.

In May, Biden said through his campaign he "strongly opposed the Keystone pipeline" as vice president and blasted Trump’s move to reverse President Obama’s decision not to permit the pipeline (E&E News PM, May 18, 2020).

CBC News and CTV News were among the first outlets to report about Biden’s post-inauguration plans for Keystone XL.

However, a person familiar with the pipeline matter said yesterday that the document cited by Canadian news media was a draft slide that was a few weeks old. Despite the timing suggested in the draft slide of an immediate permit reversal, it’s possible that could change, the person said, speaking on the condition of anonymity because they were not authorized to speak on the record on the matter.

The permit’s terms — which state that it "may be terminated, revoked, or amended at any time at the sole discretion of the President of the United States" — have long injected uncertainty around the 1,210-mile pipeline, which is intended to deliver crude oil from Alberta, Canada, to Nebraska and existing TC Energy facilities.

Christi Tezak, a managing director of research firm ClearView Energy Partners LLC, said that if Biden does rescind the permit, "as long as there is a like-minded president in office that shares that point of view, it would suggest that the project is not moving forward."

"Whether or not it’s shelved or whether or not it’s canceled altogether remains to be seen, but it certainly doesn’t seem to be going anywhere under the Biden administration," Tezak said in an interview. "To the extent that he may be succeeded by someone who shares his point of view, it would seem equally unlikely to proceed."

A TC Energy spokesperson did not respond to requests for comment yesterday about Biden’s plans. The Biden transition team also did not comment.

Industry trade groups and some politicians defended Keystone XL yesterday and said a decision to revoke the cross-border permit would be at odds with Biden’s campaign promise to provide well-paying union jobs.

In a draft letter to President-elect Biden viewed by E&E News scheduled to go out either today or tomorrow, Sen. Steve Daines (R-Mont.) and other lawmakers pointed to the president-elect’s "Build Back Better" slogan.

"Mr. President-elect, during the campaign you challenged America to ‘Build Back Better’ by investing in new infrastructure and energy technologies, creating high-paying blue-collar jobs, and preparing for the energy mix of the future," the letter said. "With these and other commitments, Keystone XL meets that important test."

Robin Rorick, vice president of midstream and industry operations at the American Petroleum Institute, urged Biden to "stand up for the thousands of good-paying union jobs" linked to the project and said the project would deliver "affordable, reliable energy" needed for the United States to recover economically from the COVID-19 pandemic.

"Thousands of union workers are already a part of this responsible and sustainable project, which will ensure the affordable, reliable energy Americans use every day is transported in the safest, most environmentally friendly way possible," Rorick said in a statement yesterday.

Biden’s plans to pull the permit also clash with the Canadian government.

Jason Kenney, the premier of Alberta, said in a statement on Twitter that if the incoming U.S. administration cancels the permit, "Alberta will work with TC Energy to use all legal avenues available to protect its interest in the project."

At a press conference, Kenney said if the project ultimately ends, there would be assets that could be sold, including "enormous quantities of pipes."

"The bottom line is, right now, our estimate of our exposure is slightly over a billion dollars," Kenney said.

Seamus O’Regan, Canada’s minister of natural resources, said in a statement that the project "will not only strengthen the vital Canada-U.S. energy relationship, but create thousands of good jobs for workers on both sides of the border."

"We’re looking forward to working with the incoming Biden administration and further strengthening the relationship with our closest ally," O’Regan said. "Our government’s support for the Keystone XL project is long-standing and well-known. And we continue to make the case for it to our American colleagues."

Still, Biden’s plans were applauded by some environmental groups yesterday.

Kendall Mackey, a ground campaign manager for 350.org, called the decision a "momentous sign" that Biden is listening to environmentalists.

"This decision to halt the Keystone XL pipeline on day one in office sets a precedent that all permitting decisions must pass a climate test and respect Indigenous rights," Mackey said in a statement. "We expect the administration to make similar announcements on Dakota Access Pipeline and Line 3."

The permit action comes as TC Energy announced a plan to reach net-zero emissions across Keystone XL’s operations when it enters service in 2023. In a video, TC Energy said the project "is creating the new green standard for sustainable pipeline development, while ensuring we deliver the energy North Americans need today, tomorrow and for years to come in a socially responsible manner."

The company said the project "squarely aligns with President-elect Joe Biden’s Build Back Better vision of a cleaner energy future that is ‘Made in America’ and provides good union jobs."

Thomas Hale, an associate professor of public policy at the University of Oxford’s Blavatnik School of Government, criticized the credibility of TC Energy’s net-zero commitment.

"All credible pledges include the full scope of emissions — including those from products — not just operations," Hale said in an email yesterday. "After all, the atmosphere does not notice if carbon pollution is coming from the running of a pipeline or what’s coming out the end of it; it all drives climate change. So this pledge is ‘zero carbon’ in the sense that whiskey made by a teetotaller is ‘non-alcoholic.’"