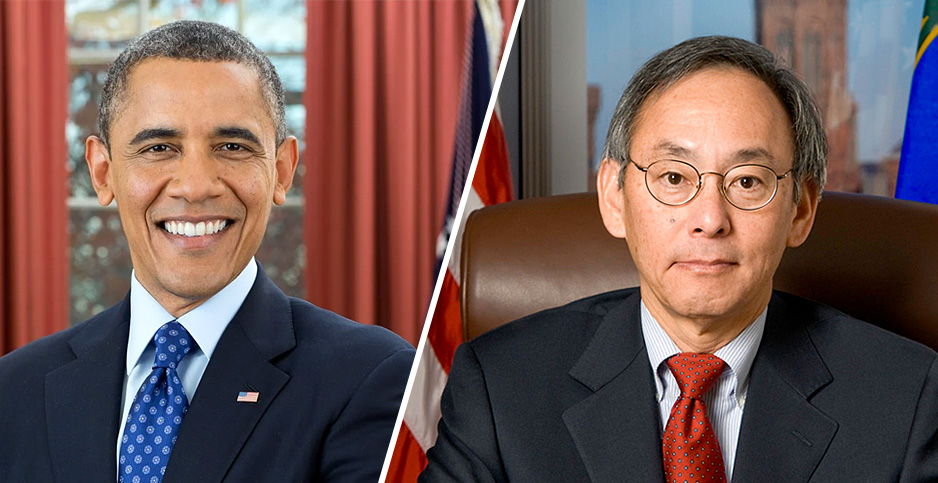 In his new memoir, President Obama portrays his first energy secretary, Steven Chu, as a genius who could describe complex issues to even "smaller-brained humans" like himself. Secretary Steven Chu. Photo credits: Obama White House and DOE

Former President Obama extols the virtues of energy efficiency standards in his new memoir, bragging that by the time he left office, new appliance regulations could keep 210 million tons of greenhouse gases from entering the atmosphere every year.

Still, Obama admitted that his enthusiasm could not rival that of his wonky Energy secretary, Steven Chu.

"The man was like a kid in a candy store, regaling me with detailed explanations of his latest standard-setting exploits," Obama wrote of Chu’s enthusiasm at being given a "mission" to update every efficiency standard he could find.

"You’d be amazed at the environmental impact of just a five percent improvement on refrigerator efficiency!" Obama quoted Chu as marveling.

"Although it was hard to match his excitement over washers and dryers," Obama added, "the results really were pretty amazing."

In his book, "A Promised Land," Obama also credited Chu with helping design a way to cap the gushing Deepwater Horizon spill in 2010 — even though oil drilling falls under the Interior Department.

Obama wrote that his "closest contact" at the time with his successor, Donald Trump, came during the spill, when Trump called White House adviser David Axelrod "out of the blue" to suggest that he be put in charge of plugging the well.

Trump was told that the well was almost sealed, and he instead offered to build a "beautiful ballroom" on the White House grounds, Obama wrote. The offer was declined.

Obama portrayed the weeks during the oil leak as a harrowing experience but called the decision to dispatch Chu to Houston to work with BP PLC’s engineers one of the best moves he made.

"In no time, [Chu] had recruited a team of independent geophysicists and hydrologists to work with him on the problem," Obama wrote, adding that because of Chu’s "insistence," the final well cap included multiple steps to measure its efficacy.

Yet Obama wrote that although the energy saving measures helped, "the ultimate pathway to lasting change, we knew, lay in getting comprehensive climate legislation through Congress."

Obama contended in the book that appliance manufacturers hit the higher efficiency goals "without much fuss and ahead of schedule." That, he said, confirmed Chu’s assertion that "ambitious regulatory standards actually spurred businesses to innovate."

Obama wrote that consumers didn’t complain about the energy-efficient models and were likely to make up the difference in lower energy costs.

Chu said yesterday that he had not read the book.

The Trump administration, which has embraced rolling back regulations, faces a host of legal challenges for failing to update efficiency standards.

Sam Kazman, general counsel for the right-leaning Competitive Enterprise Institute, disputed that consumers are happy with the products.

"That’s a dream world," Kazman said. "Why do you need a law forcing people to buy this great stuff if it’s really that great?"

The book covers the period from Obama’s childhood to the 2011 raid that killed Osama bin Laden.

Obama in the book expressed surprise that congressional Republicans like then-House Speaker John Boehner of Ohio and Senate Majority Leader Mitch McConnell of Kentucky didn’t "get particularly worked up" about the administration’s energy regulations.

Though he otherwise accused the GOP of waging "pugnacious, all-out obstruction," Obama speculated that they didn’t believe knocking efficiency standards was a winning issue or that they didn’t want to divert attention from efforts to defeat the Patient Protection and Affordable Care Act, known as Obamacare.

But, Obama wrote, there was an exception: former Rep. Michele Bachmann (R-Minn.), who he says decried "newfangled energy-efficient lightbulbs as an un-American ‘Big Brother intrusion’ and a threat to public health."

He noted that senior adviser Pete Rouse told him Bachmann had claimed that the lightbulb regulations were part of a Democratic plot to force Americans to move to cities and take mass transit to government jobs.

"Looks like our secret is out, Mr. President," Rouse said.

But two years after Obama left office, the Department of Energy blocked the planned phaseout of all incandescent bulbs — the traditional, pear-shaped bulbs made famous by inventor Thomas Edison.

That move came as Trump complained that energy-efficient lightbulbs made him "look so orange."

Though his larger climate ambitions were not realized, Obama argued in the book that his administration helped the renewables industry, writing that it directed $90 billion toward clean energy initiatives around the country as part of the $800 billion American Recovery and Reinvestment Act, aimed at bolstering a recession-racked economy.

But Obama appeared to still be smarting from the failure of Solyndra, a solar panel company that got a $500 million government loan and was held up as an example of the administration’s clean energy agenda before it laid off employees and filed for bankruptcy.

Republicans reveled in the company’s implosion, Obama wrote, as critics accused the administration of botching the call.

"I couldn’t help but fume (sometimes I’d actually picture myself with steam puffing out of my ears, as in a cartoon)," Obama wrote of the debacle, which he said threatened to "overshadow the Recovery Act’s remarkable success in galvanizing the renewable energy sector."

Though environmentalists have criticized his administration for not pushing climate change more forcefully, Obama said in the book that he told his then-chief of staff, Rahm Emanuel, to "put climate change on the same priority footing as healthcare" and to assemble a team to move the agenda (Climatewire, Nov. 18).

He said his push came despite a tanking economy, with White House adviser Axelrod telling him that "nobody gives a shit about solar panels when their home’s in foreclosure."

Obama wrote that he chose Chu because his team needed to "fully understand the scientific frontiers involved in transforming America’s energy sector" in order to tackle climate change.

Obama wrote that Chu, a Nobel Prize-winning physicist and the director of the Lawrence Berkeley National Laboratory at the time, "looked the part of an academic, with wire-rimmed glasses and an earnest but slightly distracted air."

More than once, Obama said, "staffers would have to search the White House grounds" because Chu had lost track of his schedule and wandered off before a meeting got started.

"But he was as smart as his resume indicated," Obama wrote. "With a gift for explaining highly technical issues in terms that smaller-brained humans like me could actually understand."