Kids face off with feds in landmark climate case 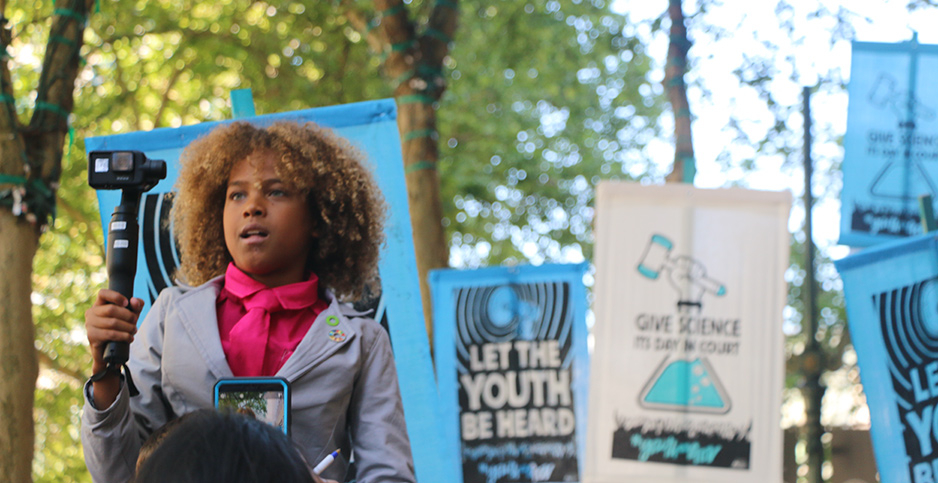 PORTLAND, Ore. — Twenty-one young Americans have no right to a "safe climate" under the Constitution, the Trump administration argued in court yesterday, rejecting a key assertion by the kids who say the government should phase out the use of fossil fuels.

Assistant Attorney General Jeffrey Bossert Clark, head of the Justice Department’s Environment and Natural Resources Division, said those rights do not exist, and he added that the case is "a direct attack on the separation of powers."

The government’s assertions came during oral arguments in the landmark climate case Juliana v. United States. And there were plenty of fireworks inside the 16th-floor courtroom and on the streets surrounding it.

Clark insisted that the plaintiffs’ "radical" desire for a district court order requiring a national energy plan phasing out fossil fuels would affect the entire country and go beyond the judicial branch’s power.

The court spent much of yesterday’s arguments focused on redressability — the question of whether the judicial branch can right the alleged wrongs against the youth challengers.

The members of the three-judge panel — 9th U.S. Circuit Court of Appeals Judges Mary Murguia and Andrew Hurwitz and California district court Judge Josephine Staton — were not easy on the government or the plaintiffs, giving each side a thorough grilling that sent the hearing overtime by 20 minutes.

Hurwitz began with a stark hypothetical. He asked Clark to take the case out of its present context, and assume there was an immediate threat to the plaintiffs’ lives — like Canadian raiders crossing the border and going on a rampage against children.

If the executive branch refused to act on that immediate threat, Hurwitz asked, could the courts step in, or would the plaintiffs have "no option but to die?"

Clark said it would be up to the executive branch to resolve the issue.

Hurwitz bore down, saying they were having "difficulty communicating" and that Clark was refashioning the hypothetical to fit his answer. But Clark insisted that if there truly were immediate danger, it would be up to the executive branch to resolve it. If it failed to do so, he said, the public could vote the president out.

"That’s the whole notion of the separation of powers," he said.

Aside from the 17 youth plaintiffs in attendance at the Mark O. Hatfield U.S. Courthouse, many of the spectators were kids — all there to witness the 9th Circuit consider the groundbreaking case.

The question for the judges: Should the litigants be allowed to go to trial on claims that the government has violated their right to a safe climate?

Dressed in their courtroom best, the plaintiffs squeezed into the first rows behind the plaintiffs’ bench, adjusting suit jackets and unwrapping last-minute snacks.

In a respite from the room’s tense mood, a courtroom marshal recited lines from Lewis Carroll’s "Jabberwocky" during a mic check — much to the delight of the plaintiffs.

‘You’re arguing for us to break new ground’

Our Children’s Trust attorney Julia Olson, who represents the kids, emphasized to the panel that the kids are not challenging government inaction on climate change; they’re fighting the affirmative choices the government has made to support continued use of fossil fuels.

Those choices have resulted in state-created danger that infringes on their Fifth Amendment rights to due process, she said.

The government’s ability to make laws that promote and approve fossil fuel industry has created "a monumental threat" to the kids’ lives, Olson said.

Olson used the 9th Circuit case Hernandez v. city of San Jose to support her claim. The case found in favor of plaintiffs, who said city police officers had increased dangers by corralling a Trump rally crowd into a gaggle of violent protesters.

She also pointed to the Supreme Court’s landmark Brown v. Board of Education school segregation case, saying that for such a "catastrophic infringement" of human rights, it took word from the courts to force the government into action.

Hurwitz grappled with whether the courts have the authority to answer the plaintiffs’ concerns.

"We maybe have the wrong Congress and the wrong president," he said, but couldn’t those branches tackle the claims themselves eventually?

Not this government, Olson said.

She added that the government mischaracterized the youth plaintiffs’ claims by suggesting they’re seeking a new constitutional right to safe climate. The rights to bodily integrity, personal security and family autonomy have already been recognized as protected under the Constitution, she said.

All the plaintiffs ask, she said, is for the court to apply "bedrock fundamental rights" to a "whole new set of facts."

Hurwitz balked at the framing.

"You’re arguing for us to break new ground," he said, adding that he was sympathetic to their claims but that Olson should not minimize the case’s novelty.

University of Oregon law professor Mary Wood, an expert in one of the plaintiffs’ legal theories, the public trust doctrine, said after the arguments that she felt "an epiphany" happen during the hearing, a realization that the case deals with affirmative, daily government action.

"There were no surprises on the government’s side at all," Wood said. But she said she was surprised at how the panel dug "very deeply into the mechanics of a remedy," making a concerted effort "to visualize the relief requested."

The panel seemed to understand, Wood said, that time is of the essence.

"The court seems to understand the reality we face," she said. "If they read the newspaper and the briefs, they know that the Trump administration is pushing these children right towards the climate cliff and that really this case is probably the only hope for pulling back."

After the arguments, a band escorted the plaintiffs and a long line of climate protesters to a rally in downtown Portland.

Amid a sea of blue and white signs, a crowd of mostly young people yelled chants into megaphones, passing out shirt patches emblazoned with "Give science its day in court!"

The plaintiffs, used to the publicity drill, told reporters they felt good about the day and were ready for whatever is next. Plaintiff Alex Loznak said he felt the judges had raised "excellent" questions in a fair hearing.

But he maintained that "we can’t really afford to wait" on the issue, and joked that there’s a chance he could graduate from law school before the case is resolved — though he said he hopes that isn’t the case.

"We really are operating on a really tight timeline," Loznak said. "We don’t have forever, but I’m glad that we had a fair hearing today."