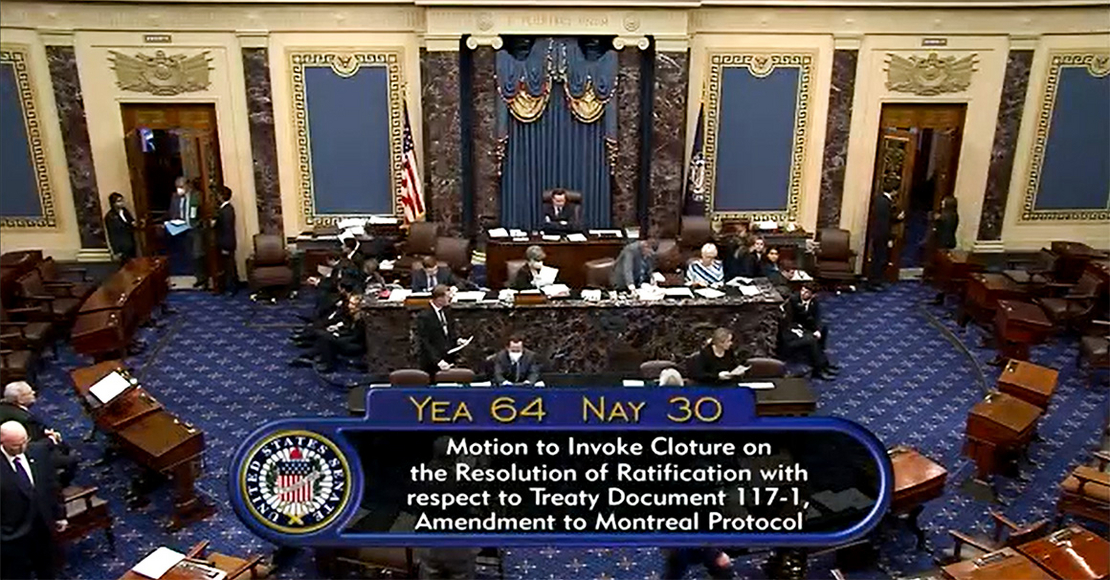 The Senate on Tuesday afternoon voted to wind down debate on the Kigali climate treaty. C-SPAN

The Senate cleared a procedural hurdle Tuesday afternoon before moving to ratify the international climate deal to phase down the use of potent greenhouse gases stemming from refrigerants and air conditioning units.

The chamber voted 64-30 to close debate on the Kigali Amendment to the Montreal Protocol, which targets hydrofluorocarbons (HFCs). It would be the first climate treaty to clear the Senate in decades. Senate Majority Leader Chuck Schumer (D-N.Y.) said a final vote could occur as soon as Wednesday.

The Constitution requires the support of two-thirds of senators present to ratify a treaty. Even though more than half of Republicans voted against cloture, absences Tuesday mean Kigali supporters should have a comfortable margin for approval.

The accord called on nations to phase down the production and use of HFCs by 85 percent over 15 years. That could prevent a half-degree Celsius of warming by the end of the century.

“That’s huge,” Schumer told reporters about the impacts on climate change. “That shows how important it is.”

Minority Leader Mitch McConnell (R-Ky.) told reporters he entered the chamber undecided on how he would vote. He said the the accord was one of the topics under discussion during the Republican weekly caucus lunch. McConnell eventually voted no.

Republicans stalled on Kigali through the Trump administration even as the refrigerant and cooling industry worked to build support for ratification. Many in the GOP are skeptical of joining an international, multilateral climate framework.

Congress already enacted legislation authorizing EPA to set rules limiting HFCs in appliances as part of the year-end spending bill in 2020. Sen. John Kennedy (R-La.) was among its sponsors.

The Biden administration formally submitted the Kigali Agreement for ratification last year, and the Foreign Relations Committee advanced it out of committee with bipartisan support earlier this summer.

Democrats have looked to make a business case for ratification, especially when an agreement provision would penalize, beginning in 2033, U.S. trade that doesn’t comply with international standards.

“Ratifying Kigali will ensure American companies will dominate export markets into the future,” said Menendez. “It will also weaken the market in the United States of imports from China and elsewhere.”