King of the energy flacks 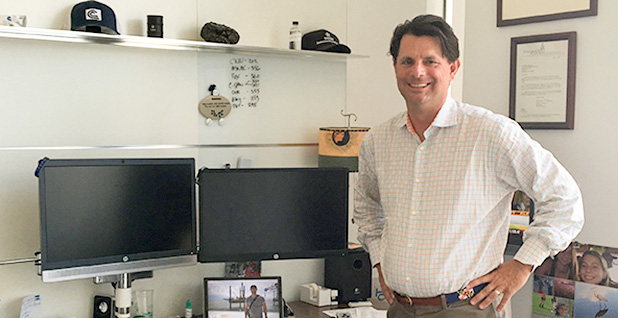 If there’s an energy hearing on Capitol Hill, Frank Maisano will likely be camped out at the table reserved for press, bantering with reporters and gathering intel.

"I always do that," Maisano said during a recent interview of his regular interloping at the press table. "If I’m not sitting there … I don’t know what’s going on."

It allows him to strike up conversations with reporters, throw out a few points he thinks are important and push back if he disagrees with what’s being said.

Maisano’s assertive tactics have made him a go-to source for beat reporters who know he’s quick to respond and well-connected. And that makes him appealing to industry clients who want the press to hear their side of the story but who haven’t always been comfortable delivering rapid responses in a 24/7 news cycle. He’s credited with helping to revolutionize how the energy industry communicates with the media.

Maisano is 48 and tall, with signature dark, floppy hair. He’s got the swagger of an athlete, likely honed in his days as a high school track star.

He works in Bracewell’s Policy Resolution Group, a shop that combines lobbyists, lawyers and communications experts. His clients include a range of energy interests like coal behemoth Southern Co. and other utilities; oil refiners Tesoro and Valero; solar company BrightSource Energy; and a trade group of air conditioning, heating and commercial refrigeration equipment manufacturers. He has also represented wind industry groups and worked for the green organization Environmental Working Group.

He drives his Chevy Volt every day from his home in Gambrills, Md., to his swank office just north of K Street. It’s decorated with a framed Kiss poster, a wind turbine replica, hockey pucks, photos of him during his track days and snapshots of his three children.

On a recent morning, he had Fox News playing on a television and drank from a can of Coca-Cola Zero. He had just wrapped up a whirlwind tour stopping at the Republican National Convention in Cleveland, followed by the Democrats’ convention in Philadelphia.

More than a strong ideological bent, he’s driven by a desire to win coverage for his clients.

As a former Republican congressional aide who primarily represents industry groups, he’s got a reputation as leaning right.

As for his personal politics, he said, "I’m not going to be somebody who signals that I’m for Clinton or for Trump or whatever, and I never am, because no matter who wins, we have to work with them." And he’s always thoughtful about what he tells reporters. "My philosophy is generally I wouldn’t say anything that I don’t want to see on the front page of The New York Times."

He’s a native of Center Line, Mich., a Detroit suburb. He went to Hillsdale College on a track scholarship and did a summer internship in Washington, D.C., working for retired Supreme Court Chief Justice Warren Burger, who was then leading a commission to celebrate the bicentennial of the Constitution.

Maisano wasn’t yet sure what he wanted to do after school. "I wanted to go to Washington, and I kind of wanted to be a congressman," he said.

He worked in the PR shops for Republican lawmakers — Sen. Dick Lugar of Indiana and Reps. Bill Schuette of Michigan, Toby Roth of Wisconsin, Hal Rogers of Kentucky and Joe Knollenberg of Michigan.

But Maisano abandoned his congressional aspirations when he was traveling with Roth back in Wisconsin, he said. "I quickly learned that I had no interest in being a congressman because you were on all the time."

That includes quick trips to the grocery store.

When staff were traveling with Roth in his home district, "His family made you eat dinner with them. They were the nicest people. They didn’t want you going to the hotel and having dinner by yourself, you had to have dinner with the family," Maisano said. "We were stopping at the store to get milk and one other thing that Mrs. Roth needed, and three hours later, we made it home."

He stuck to PR. He’s been working on energy issues for more than 20 years.

"Not many people have that historical perspective because they’re all dead or they don’t work on the issue anymore or they’ve left," he said.

Reporters new to the energy beat can expect Maisano to be among their first callers.

Washington Post reporter Juliet Eilperin covered environmental issues for years before moving to the paper’s White House team. "The minute a new reporter comes to the environment job, Frank is the first person I hear from asking for an introduction," she said.

Darren Goode, a former energy reporter who’s now communications director at the conservative energy group ClearPath Foundation, recalled Maisano being "literally in the middle of what reporters are doing" on Capitol Hill, sometimes when they’re trying to meet deadlines.

"I’d be sitting in a hearing really trying to pay attention to what’s happening," Goode said. Then, "I’ll feel that hand on my shoulder, and without even looking I’m thinking, ‘Not now, Frank. Not now, Frank.’"

But, Goode added, "that’s what you need. … That’s much better than anyone who sits at their desk." ClearPath is now one of Maisano’s clients, so Goode and Maisano are working together.

On Mondays, Maisano sends out weekly "Energy Update" emails rounding up news stories and upcoming events. They’re also packed with details about his personal life, like the Counting Crows concert he planned to attend that got rained out, his daughter’s plans to attend Wellesley in the fall and the hockey visor he received as a birthday present. He signs off urging reporters to call with questions.

The update goes out to about 5,000 people. It started off as a resource for reporters, but it’s since expanded and now includes his clients, environmentalists and others.

In addition to seeing him as accessible, reporters consider Maisano an important conduit for getting industry’s point of view.

"He’s just incredibly straightforward," Eilperin said. "What you’re always looking for as a reporter is an honest broker who’s going to give you their perspective, not engage in too much spin but also be willing to engage in the fight."

When she started covering environmental issues more than a decade ago, the environmental community had a "considerable PR machine." On the flip side, it was tough to get industry representatives on the phone quickly, "which is a huge problem when you’re on deadline."

Eilperin said Maisano was among the first in the energy world to recognize that "industry needed to have a rapid response to issues of the day and that they needed to tell their side of the story."

Steve Mufson, who covers energy at the Post, has known Maisano for about a decade. They get lunch together periodically.

Maisano is aggressive, but "not obnoxiously aggressive," Mufson said. "He has good news judgment and … usually when he calls, it’s a totally reasonable thing, and if it’s not something that catches your eye, he doesn’t try to push, he just says, ‘I’ll get you next time."

Maisano has been known to push back on reporters, too, when he doesn’t feel his clients have gotten a fair shake.

"He takes his hits and moves on," she said. "He cares about certain issues, but he also has a certain amount of critical distance to anything that he’s doing, and that allows him to move past any temporary disagreements."

Maisano moonlights as a referee for hockey, football, lacrosse and field hockey and has been a referee since he was 15. Among the things he’s learned from being a ref, he said: "One is that I don’t take things personally. Two, I respond appropriately and accordingly. And third, I’m a much better decisionmaker."

He doesn’t shy away from sparring with the left, but he says he has a "pretty good" relationship with environmentalists.

"There are a few newbies, I will say, people who come to the issue who don’t understand, they want to attack you," he said.

Sometimes his opponents will try to undermine him by referring to his past and things that he’s worked on, he said. But "I’ve pretty much worn most of it on my sleeve," he added. "I’ve never been one of those guys who doesn’t talk about who he works for."

Even those who often oppose Maisano respect his work ethic.

"He’s the hardest-working man I know in the business," said Frank O’Donnell, the head of the environmental nonprofit Clean Air Watch, who often finds himself opposing Maisano and his clients. "He and I have a very good relationship, as far as I’m concerned."

O’Donnell has heard environmentalists gripe about the frequency with which Maisano is quoted in stories. His reply: "Watch the activity and watch the results. … How many people are going to make themselves available 24/7 on a range of topics? Not many."

Maisano has personally "changed the landscape more than any other person I’ve seen in that business," O’Donnell said. "He’s lifted the whole industry response to a lot of issues, whereas in the past everybody would clam up and just sort of leave stories in the realm of either government or environment and energy nonprofit initiatives." Maisano has been quick to tell his clients, "You can’t just sit on your hands."

Scott Segal, head of Bracewell’s Policy Resolution Group, who helped bring Maisano to Bracewell 14 years ago, called Maisano "an original" who’s "a quintessential people person" with "an incredible nose for what makes a good story."

"The best way to describe Frank is a force of nature," Segal said. "Once he is unleashed, there’s no turning back."