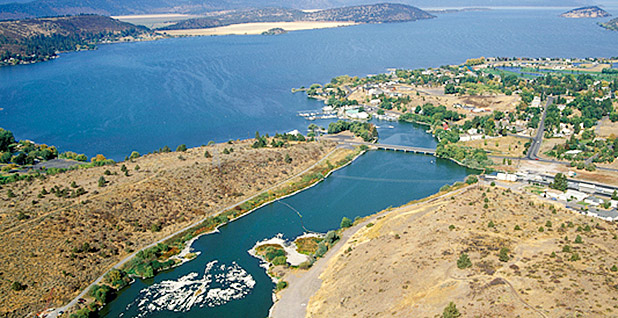 Farmers served by the Klamath Project in southern Oregon have lost a long-running lawsuit. Bureau of Reclamation/Department of Interior

A 2001 Western water dispute that turned into a long-simmering fight over federal taking of property has now ended in defeat for aggrieved farmers in the Klamath River Basin.

In a 75-page opinion, U.S. Court of Federal Claims Judge Marian Blank Horn concluded the farmers’ long-ago loss of irrigation water in southern Oregon and Northern California did not amount to a taking for which compensation was owed.

"The court recognizes the hardships encountered by many [farmers] as a result of the actions taken in 2001," Horn wrote, adding that she "also recognizes the unfortunate amount of time it has taken to resolve these claims."

Horn nonetheless concluded that the Bureau of Reclamation’s shut-off of water to the farmers was, however painful, in service to the "senior water rights" held by the region’s Klamath, Yurok and Hoopa Valley tribes.

"The government’s actions in 2001, did not, therefore, constitute a taking of these plaintiffs’ property under the Fifth Amendment to the United States Constitution," Horn wrote.

Horn’s Sept. 29 decision followed a two-week trial, which ended in mid-February. The trial, in turn, took place only after years of maneuvering, one early appeal and the departures of two prior claims court judges.

"It could be the end of the case, but we’re still reviewing the decision, including the possibility of an appeal," Nancie Marzulla, a Washington, D.C.-based attorney for the farmers, said in an interview yesterday.

Marzulla suggested, moreover, that parts of Horn’s lengthy opinion and some of the decisions that preceded it could be mined by farmers or other property owners down the road.

For the Klamath farmers, millions of dollars have been on the line.

The Klamath Irrigation District, in Klamath Falls, Ore., and individual farmers priced the lost water at $28,582,310, which they sought plus years’ worth of interest as compensation.

The Fifth Amendment prohibits the taking of private property for public use without just compensation.

Facing threats to coho salmon and other fish protected under the Endangered Species Act, the George W. Bush administration opted in 2001 not to release about 336,000 acre-feet of water from Upper Klamath Lake and the Klamath River to hundreds of farmers served by the Klamath Project.

An acre-foot is enough water to serve a family of four for a year.

The administration stopped the irrigation deliveries under the guidance of the Fish and Wildlife Service and NOAA Fisheries.

"The ‘Klamath farmers’ are entitled to just compensation for the taking and impairment of their water rights," the farmers’ attorneys declared in one brief.

The government countered that the Bureau of Reclamation couldn’t deliver water to the Klamath farmers in 2001 because of its obligations to serve the three Klamath Basin tribes, along with reserving water for protected species.

The tribes hold rights to take fish from Klamath Project waters, under the terms of an 1864 treaty as well as several 19th-century executive orders, Horn noted.

"According to [the government], because there was not even enough water to fully satisfy the tribes’ senior water rights in 2001, [the farmers], as junior rights holders, were not entitled to receive any water and, thus, no taking occurred," Horn wrote.

Environmentalists and the Pacific Coast Federation of Fishermen’s Associations praised the decision.

"This decision was required by the law and had the effect of helping to protect the economies and traditions of tribal and coastal communities that rely on salmon and other fish," Todd True, a senior attorney in Earthjustice’s Seattle office, said in a statement.

Horn’s opinion is dense with cited precedents, and with verbiage sorting through the procedural tangles of very complicated litigation, but several parts could come into play in potential future lawsuits.

Notably, Horn sided with the farmers in reiterating a December decision in which she ruled that she would analyze their loss of water as a potential physical rather than a potential regulatory taking (Greenwire, Dec. 22, 2016). Though she eventually ruled against the farmers on their bottom-line claim, her method of analysis was not what the government asked for.

The government wanted the farmers’ claims evaluated in the regulatory context, in which the court balances the benefits of the decision against property owner losses. By contrast, if it’s deemed a physical taking, the government must automatically pay.

"The Bureau of Reclamation caused Klamath Project water to be diverted away from [farmers’] lands and towards Upper Klamath Lake and the Klamath Rivers," Horn wrote, describing the steps taken as "physical action."