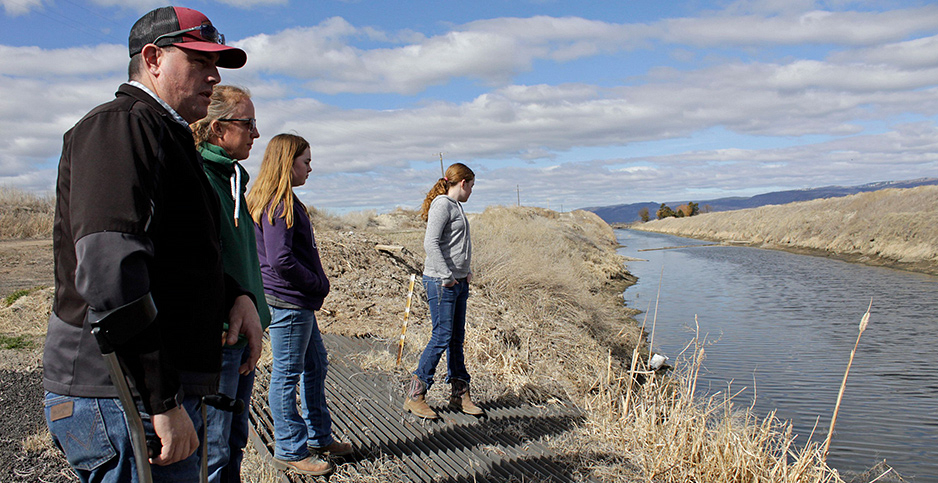 Farmer Ben DuVal, his wife, Erika, and their daughters, Hannah, 12, in purple, and Helena, 10, in gray, standing near a canal for collecting runoff water near their property in Tulelake, Calif., March 2, 2020. A severe drought is creating a water crisis not seen in more than a century for farmers, tribes and federally protected fish along the Oregon-California border as federal authorities cut off releases from a dam that provides critical sustenance for a massive irrigation project and bolsters downstream water levels for dangerously diminished salmon populations. Gillian Flaccus/AP/Shutterstock

Tensions surrounding a Western water shortage are on the verge of exploding, with some activists threatening to seize control of federal water infrastructure and anti-government rabble-rouser Ammon Bundy waiting in the wings.

But several farmers and irrigators in the Klamath River Basin in southern Oregon and Northern California have a message for Bundy and others: Stay away.

And some are questioning the leaders’ anti-government bona fides since public records show they have directly benefited from government programs.

"I support without qualification the right to peaceful assembly and to air one’s grievances and ideas," said Paul Simmons, the executive director of the Klamath Water Users Association, which represents irrigators. "With that said, I would be surprised if all the people attending these events combined farm more than 1% of the acreage in the Klamath Project."

The Bureau of Reclamation’s Klamath Project provides water to about 240,000 acres of cropland spanning the California-Oregon border.

For the first time since the project came online in 1907, Reclamation has said it won’t deliver any water this year due to extreme drought and the agency’s endangered species obligations. There are threatened sucker fish species in the project’s main reservoir and, downriver, a severely threatened salmon run.

Protests in the small Oregon town of Klamath Falls nearly turned violent 20 years ago (Greenwire, March 13, 2017). Now the same activists have again stepped forward, with two buying the land next to head gates that control water diversions to the project and threatening to once again pry them open.

This time, Grant Knoll and Dan Nielsen are counting on Bundy’s support and are holding events backed by People’s Rights, an activist group that challenges alleged government intrusion. The next event is scheduled for tonight.

"We’re trying to educate the public about how the bureau is stealing our water," Nielsen told E&E News in an interview. "We were here in 2001. Here we are 20 years later, back doing the same thing."

He added, "I talk to Ammon quite a bit," and said that despite new safety precautions at the head gates, they stand ready to take action.

"We’re not stupid people," he said. "We know what we’re doing. We can get it open. That isn’t a problem."

However, Nielsen, who said he raises alfalfa on 43 acres, does not have the support of all the project’s farmers in the region, and some have raised questions surrounding where his support is coming from.

"Stop it," Ben DuVal, a local farmer and president of the Klamath Water Users Association, said in a statement last month. "It is completely out of line. It will hurt Klamath Project agriculture."

"What’s happening at the head gates now is a convoluted mix of people who want to fight for private property rights," said Scott Seus, a third generation farmer whose family’s legacy is growing horseradish, though he now produces many other crops as well.

Seus joined the protests in 2001, saying they were "locally led, locally supported."

"It was real farmers that were protesting," he said.

That’s not what is happening now, he added, and it’s distracting from the plight of farmers who are worried they will go under next year if they don’t receive water deliveries.

Tricia Hill, another farmer in the region, agreed and said the threat of violence or prying open the head gates "reinforces the stereotypes people have about farmers and rural communities. By reinforcing those stereotypes, it allows people to marginalize us."

"On my farm, myself and my other partners, we have a lot of work to do," she said. "We have customers and employees who rely on us to figure out how to make it through this year and who rely on what we do."

Seus said it could also undermine any progress.

A way forward, he said, is only going to come from "sitting down with the people who may not agree with you and trying to find solutions."

"At the end of the day," he added, "all you have is your integrity."

The Klamath crisis has created an early challenge for the Biden administration and will likely foreshadow other Western water shortages due to drought and climate change.

Virtually half the West is suffering through drought, according to federal forecasters, and the problems are particularly acute in much of the Colorado River Basin and California, where Gov. Gavin Newsom (D) recently expanded an emergency drought order (Greenwire, May 11).

Reclamation and Interior Department officials declined to answer questions about the ongoing protests on the Klamath and whether a law enforcement response was needed. But agency sources said the agency is closely monitoring developments at all levels and has raised concerns about Bundy, who led the 41-day armed takeover of a national wildlife refuge in 2016.

Bundy established the People’s Rights group last year to oppose public health mandates in Idaho tied to the COVID-19 pandemic, but has since grown the organization to 37 states and more than 52,000 members.

In public events, he touts his previous showdowns with the federal government — both in Oregon and at his father’s Bunkerville, Nev., ranch in 2014 — and boasts about the fact that he was not convicted in either incident, despite facing trials in both (Greenwire, March 11).

Bundy did not respond to a request for comment but told The New York Times that he supports the use of force to open the flood gates if necessary.

"Who cares if there is violence? At least something will be worked out," Bundy told the newspaper, framing the issue as a fight for the nation’s food supply. "’Oh, we don’t want violence, we’ll just starve to death.’ Heaven forbid we talk about violence."

While Nielsen and Knoll are leading protests against the federal water managers, public records reveal that their wariness about the government has not stopped them from taking federal funds.

Knoll began farming in the region in the late 1990s, according to a 2011 profile in the Klamath Falls Herald and News.

At that time, Knoll, a cattle rancher and alfalfa farmer, lamented to the newspaper that the Bureau of Reclamation’s involvement in the region hinders potential farmers.

"We were fortunate Dad had property here," Knoll told the newspaper. He said his property included land from his father along with acreage he purchased. "None of the banks here will finance you."

The government would, however.

According to public records, Knoll Ranch LLC — operated by Grant Knoll and his spouse, Amber Knoll — has received nearly $1.3 million in federal loans.

The bulk of those funds came in 2011, when Knoll Ranch received a $890,000 "guaranteed operating loan" from the Agriculture Department’s Farm Service Agency. According to the FSA, those loans are designed to "promote, build and sustain family farms for a thriving agricultural economy."

Between 2006 and 2015, Knoll Ranch was awarded nearly $63,000 from USDA’s Conservation Security Program, which addresses "the conservation and improvement of soil, water, air, energy, plant and animal life."

Most recently, Knoll Ranch received $13,500 via the Paycheck Protection loan program (PPP) in January. The ranch received $12,300 from the same program in April 2020.

According to public records, USDA issued the trucking firm a $9,500 grant in 2013 as part of its Rural Energy for America Program. Those funds are directed to rural small businesses and agricultural producers to promote energy efficiency.

Efforts to reach Knoll were unsuccessful. Nielsen said the 2013 grant was funding "for some solar panels" to offset irrigation pumping costs.

"We’re not anti-government," he said. "We’re just trying to keep the government from overreaching and theft."

The usual opposing parties in the basin — the tribes who want to preserve water for fish and the farmers who want more of it for crops — appear at least somewhat aligned that the current protests are misguided.

"There is misplaced animosity toward the Bureau of Reclamation," Seus said, adding that the agency is bound by court rulings and the Endangered Species Act.

Gentry said he believes agriculture in the region needs to be "right-sized," or reduced, to meet a warmer climate that produces less water in the region and protects the local ecosystem.

He also pointed out what he views as an inconsistency among the current protesters.

Gentry added that any dialogue within the region is being threatened by the current protests, and that Reclamation would have to be a major player.

"I don’t see how this helps any collaborative process. They are extreme."