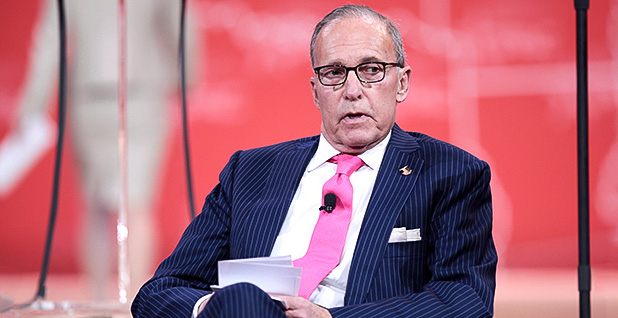 Larry Kudlow has been a cable news pundit, an anti-war organizer nicknamed "Kuddles," a top economics adviser to President Reagan and a recovering drug addict.

Now, the longtime public figure and Washington insider is the apparent front-runner for a key White House energy policy job.

Kudlow, 70, has emerged as a top contender to replace Gary Cohn as the leader of the White House National Economic Council, according to sources who know him. He’s the latest potential Cohn replacement to dominate headlines in recent days as rumors swirl about prospects for the job. Other names in circulation include Chris Liddell, a former business executive and White House director of strategic initiatives, and Cohn’s deputy, Shahira Knight.

And while Kudlow is a former Democrat who once worked on a political campaign with Bill Clinton, he’s expected to toe the Trump administration’s line on energy policy — perhaps even more so than Cohn, who lost a battle to keep the United States in the Paris climate agreement.

Stephen Moore, a fellow at the Heritage Foundation who also advised Trump’s campaign, said yesterday in an interview that Kudlow is "under serious consideration" for the job. He added that Kudlow "would be my first choice, for sure."

Earlier this month, Kudlow and Moore penned an op-ed in The Hill criticizing Trump’s steel and aluminum tariffs. Cohn’s opposition to those tariffs is widely seen as the event triggering his exit.

Overall, Kudlow has been dismissive of pleas to aggressively address climate change. Kudlow has displayed a willingness to promote views that question or downplay the urgency.

Kudlow, who had been an informal adviser to Trump’s presidential campaign, lauded the withdrawal from the Paris Agreement last year, touting it as a move toward ending "the war on fossil fuels" in a radio interview last June. He also defended Trump’s environmental stance. "Trump never said he wasn’t concerned about climate change. [Trump] said in his speech he takes climate change seriously. But he said, ‘We’re in a bad deal.’"

He has promoted climate skeptic talking points such as solar warming and increased solar activity driving temperatures higher, saying in a May 2008 column for CNBC, "There’s a bunch of scientists who don’t think we have a global-warming problem at all." Most climate scientists, including many working for the federal government, would disagree with that statement.

Kudlow has also scoffed at "Al Gore’s global warming hysteria" and rejected many of the policy responses as "anti-capitalist," even attacking then-GOP presidential nominee Sen. John McCain’s (R-Ariz.) cap-and-trade plan as "very hard for conservatives to swallow" in a National Review op-ed — though Kudlow’s opposition to such measures pre-dated McCain’s candidacy.

"As for the global-warming alarmists, imposing carbon caps or carbon taxes won’t do anyone any good," he wrote in a January 2007 piece for the National Review. "On the economic side of things, this will severely depress production and employment. And for what? An estimated global temperature reduction of 4/100ths of 1 degree Fahrenheit?"

"The EU’s tax and regulatory policies, climate-change and welfare spending and free immigration — even in wartime — are gradually ruining Europe," he wrote in a June 25, 2016, CNBC column. "That’s why I believe Brexit is good for British freedom, political autonomy and the survival of democratic capitalism."

Kudlow has also been skeptical of involving the United States in international climate change agreements beyond Paris. He criticized the Kyoto Protocol, adding his voice to bipartisan congressional opposition that said the treaty put the U.S. economy at a disadvantage because it didn’t bind competitors like China and India to emissions cuts.

In Kudlow, Trump would have an economic adviser with a competitive streak and "a desire to win," said John Glidden Jr., a friend of Kudlow’s for more than 50 years who is now a senior vice president at New York-based investment bank Gates Capital Corp.

Kudlow couldn’t play a lick of tennis in grade school when he met Glidden, whose family was well-known on the courts in their Englewood, N.J., community. But Kudlow was determined to change the dynamic.

Kudlow and Trump also share a somewhat specific interest: a disdain for Sen. Richard Blumenthal (D-Conn.). Glidden said Kudlow explored a potential Senate run as a Republican when Blumenthal, a vocal and frequent Trump critic, ran for re-election in 2016.

Glidden called Kudlow "a very big supply-sider" in how he approaches economic issues — he has rejected top-down mandates and policy solutions that smack of federal planning.

That means that while Kudlow will find much to agree on with Trump, he may also spar with the president, given the administration’s propensity for protectionist trade policies.

"He’s not afraid to say when he doesn’t agree with the president, like he recently did on the tariffs on steel and aluminum," Glidden said.

In the Trump White House, domestic energy policy has largely been run out of the NEC, a practice that is expected to continue after Cohn’s departure. The role of the next NEC director in shaping energy policy is expected to be dictated by how much of an interest that person has in weighing in on the issues, versus delegating work to staffers.

"It all depends on whether the person is strongly interested or committed on any of these issues," said Myron Ebell, director of the Center for Energy and Environment at the Competitive Enterprise Institute, who has known Kudlow for years and has worked with him in the past. "My view of Larry is that he knows something about energy interests and climate, but his primary interests are in taxes," Ebell said.

Kudlow’s past is undergoing a renewed round of scrutiny, given his rumored contention for the job. That’s certain to intensify if he gets one of the top advisory posts in the Trump White House.

He was an anti-war activist and a member of the left-wing Students for a Democratic Society, according to a 1995 profile in New York magazine. His friends called him "Kuddles" because "he was such a cutie," the profile said. He worked alongside Clinton in the failed 1970 senatorial campaign of Joseph Duffey, a Democrat running in Connecticut.

His politics later shifted rightward, and he became a star economist in the Reagan administration’s budget office. "He was dangerously candid with journalists about the weaknesses in the Reagan budget," according to New York. He went on to be Bear Stearns’ chief economist but later went into rehab for drug use. An unflattering Buffalo News headline in 1995 read, "Economist Kudlow on a ‘cocaine binge,’ wife says."

Kudlow spoke publicly about his rehabilitation and struggle with drug addiction, telling The New York Times in 1994, "I’m on top of this thing, God bless."

Since then, Kudlow has been economics editor of National Review and co-host of CNBC’s "The Kudlow Report," which ran from 2009 until 2014. He’s still a frequent CNBC contributor.

Asked on the network last week about the possibility that he would replace Cohn, Kudlow said, "I don’t have any comments on that stuff." He added, "I just don’t want to walk through all those scenarios."