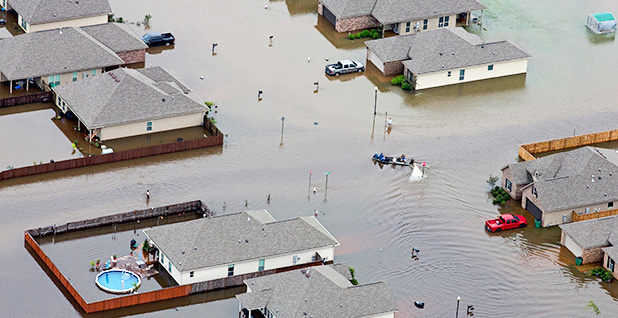 Louisiana Rep. John Fleming was driving on Sunday from New Orleans to his district in the northern part of the state.

He passed through Baton Rouge, which was at the center of catastrophic flooding that caused the federal government to declare a major disaster for the state. Fleming, who was traveling with his staff after a campaign stop in New Orleans, said the major highways were blocked, "so we had to weave our way through back roads, back highways."

Neighbors were using small fishing boats to transport people from their homes to dry land.

"I just happened to be at ground zero when it was in the process of happening," Fleming said.

As of yesterday, the statewide death toll had reached 11, rescue operations were underway and about 40,000 homes had been affected in some way, NBC News reported.

"The water rose so quickly that people had virtually no warning at all," Fleming said. Fleming, a Republican who is running to replace Sen. David Vitter (R-La.), said the family of one of his campaign staffers had their home devastated and both cars flooded. "They had not an inkling that this was happening," he said.

The disaster has raised broad questions about whether the destruction could have been mitigated, whether infrastructure can be improved in the wake of the flooding, and the role climate change played in the unprecedented event (ClimateWire, Aug. 16).

Former Louisiana Democratic Sen. J. Bennett Johnston Jr. said today that whether it could have been prevented is "a very hard question to ask, because, prevented by what?"

The Amite and Comite river basins that flooded "have been a longtime challenge for Louisiana," Johnston said today in an interview. "It’s a huge basin with a long-term flooding problem." Spending billions of dollars in that basin could have helped, Johnston said, but whether it could have prevented the flooding altogether is less certain.

"It’s not the last big storm we’ll have, but they don’t come that often at this scale. This is a huge amount of rain in a short period of time. But that happens, and with global warming it may be happening more often now, although it’s hard to ascribe any particular event to climate change. But we’ve had these things for years in Louisiana. We’re very weary of them."

Johnston pointed to the Great Mississippi Flood of 1927, when New Orleans experienced 15 inches of rain in 18 hours, according to National Geographic. Levees failed, and about 27,000 square miles of land was flooded — roughly the combined size of Massachusetts, Connecticut, New Hampshire and Vermont.

"That was much worse than this," Johnston said. "Louisiana has just from time to time got big flooding problems because we’re in an area that can get that huge rain."

Rob Moore, a senior policy analyst in the water program at the Natural Resources Defense Council, said the recent flooding should be a "real wake-up call for Louisiana and the rest of the nation."

And while this "really is one of those kind of events outside the ordinary experience," Moore said, "this is the latest in a series of unprecedented storms that have now set new precedents."

The disaster highlights the need for communities to start thinking about how climate change is "increasing our vulnerability to natural disasters" and to take "much more serious steps to safeguard against events that we may once have thought of as unlikely, if not impossible."

Moore said, "We can’t rely on past experience."