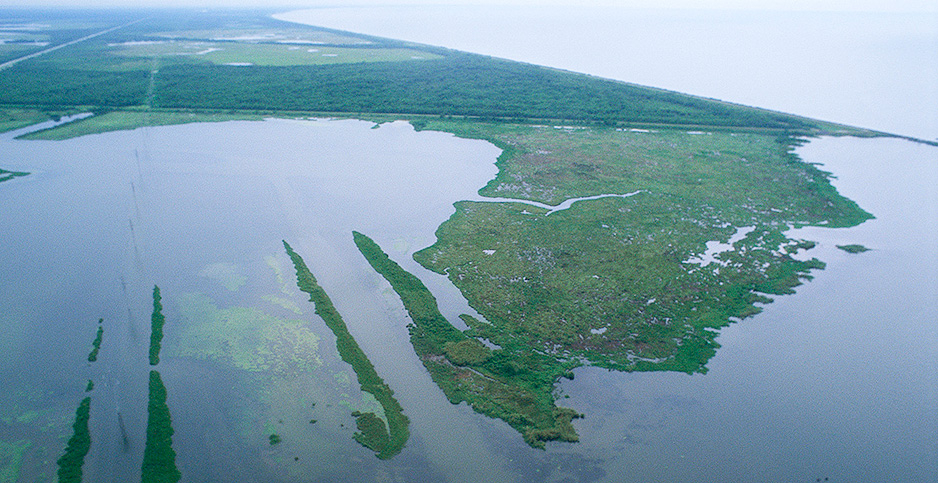 "Climate change is going to sweep away everything they are trying to preserve," said Edward Richards, director of the Louisiana State University Law Center’s Climate Change Law and Policy Project, in an email.

The lawsuits are rooted, mainly, in historical practices. Oil and gas companies cut through the sensitive marshland that hangs off the bottom of the state’s boot in order to lay pipelines and enable transportation. These canals are one of the factors contributing to a gradual collapse of the ecosystem.

The state’s coastal master plan states that the practice of scraping out canals "took a toll on the landscape, altering wetland hydrology and leading to land loss."

And Freeport-McMoRan Inc., the firm that agreed to settle, didn’t accept culpability for damage. The company said it decided to avoid drawn-out litigation in favor of a "creative" solution. Its offer, pending parish agreement, would provide up to $100 million for coastal restoration.

It’s necessary cash. A comprehensive state plan of defense against further erosion, climate change, subsidence and flooding carries a $50 billion price tag over 50 years. Funding ideas depend on what’s left of the money from the Deepwater Horizon oil spill and royalties from offshore oil developers. It doesn’t nearly reach that total.

Democratic Gov. John Bel Edwards, who is pushing for Louisiana to get a greater percentage of federal oil and gas royalties in the Gulf of Mexico to fund coastal projects, spoke favorably of the tentative settlement agreement. The governor’s office did not respond to a request for an interview by press time.

"These Louisiana coastal restoration schemes are just part of the state’s climate change denial," he said.

In September, the U.N. Intergovernmental Panel on Climate Change forecast that global sea levels would rise between 2 and 3 feet by 2100. But it’s worse than that, Richards said. The relative sea-level rise for parts of the Louisiana coast — a figure that adds the sea-level rise to the rate of sinking land — is 10 millimeters a year.

The story of Louisiana isn’t one of a coastline that’s being eroded, but an ocean that is overtaking the sinking land, he said.

"LA environmentalists hate oil companies, for good reason. This does not mean that all of LA’s problems are caused by the oil industry," he said. "It is easy to be blinded by simple solutions to the climate problem, but you know that is not going to work."

McLindon, who is president of the New Orleans Geological Society, is working on the Louisiana Coastal Geohazards Atlas alongside the Louisiana Geological Survey and industry. When complete, the atlas will represent an underground map of the coastline that can come only from the oil and gas sector’s knowledge, he said.

He estimates the sector’s contribution in data is worth more than $350 million so far.

"To single out the oil and gas industry … just doesn’t seem like the proper way to go about funding sustainability, when its data and knowledge would be so much more valuable," he said.

The U.S. Geological Survey once hooked the world’s imagination by estimating a football-field-per-hour loss of the Mississippi Delta that fans out from south Louisiana. But though technically accurate, the figure was an average of the total land loss from the mid-1980s to 2010, not a stable rate.

There’s a determined contingent of people who live in those fracturing lands and the below-sea-level areas just north, like New Orleans, that are at risk.

Emily Vuxton, policy director for the Coalition to Restore Coastal Louisiana, said despite a sustained exodus north that spikes after every big hurricane, those left behind are looking for ways to stay in place. And governments don’t ever want to try to force them otherwise, she said.

Vuxton said she knows sea-level rise promises existential threat, but the fatalism of simply letting the marshes go wouldn’t serve the state either.

On a minor scale, the settlement with Freeport may offer parishes most at risk of sea-level rise the money needed to help stay in place. But unless larger companies lose in court or agree to settle, $100 million for some parishes is not enough to save Louisiana from the "steep financial cliff" it’s facing for restoration work, she said.

"Is all of this just going to be overtaken by the inevitable and inexorable process of climate change, I don’t know," he said. "I think that’s the best thing we can do, understand that this is going to happen and put factors in place that provide some mitigation against it."

Eugene Turner, a professor at the Louisiana State University College of the Coast & Environment who has worked on restoration of the Gulf, criticized parts of the state’s approach to sustaining the coast. Like Richards, the LSU lawyer, he’s sure of the final outcome.