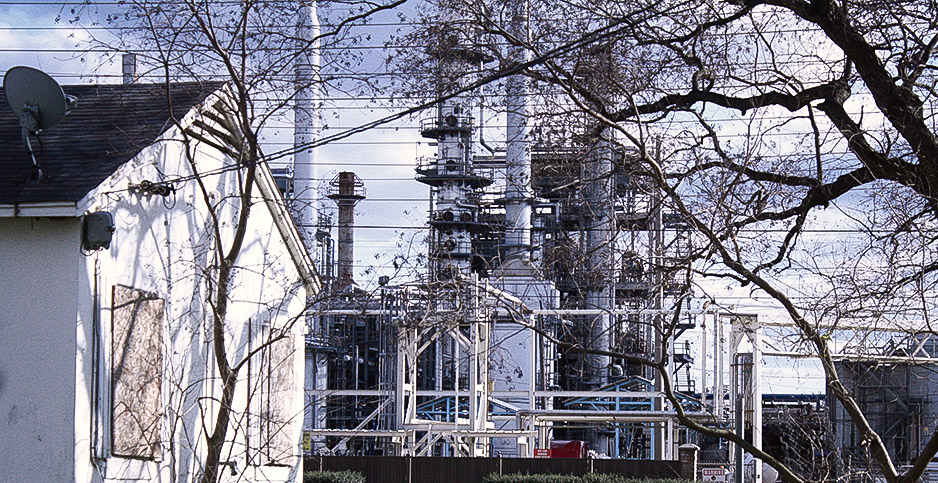 An abandoned home sits empty near a Shreveport, La., oil refinery. The plant's previous owner, Pennzoil-Quaker State, has offered to settle in a class-action lawsuit with residents over the health impacts of pollution. Heather Richards/E&E News

A group of oil companies, including Royal Dutch Shell PLC, earlier this year offered residents living in a mostly Black neighborhood near a Louisiana refinery $2.7 million to settle a bundle of lawsuits that have dragged on for two decades.

The lawsuits first filed in 2001, now involving 703 people, claim that toxic releases and a fire in 2000 at the Shreveport refinery led to people experiencing health problems, from asthma to leukemia. The settlement offers also address property damage claims related to the refinery.

Settlement amounts the plaintiffs would receive range from $500 to $16,000, depending on the severity of the health or property effects they experienced, according to a website set up for residents to track their claims and offers.

The refinery is surrounded by residential streets in western Shreveport. It was the subject of an E&E News and American University investigation last year, looking at how Louisiana corporate tax benefits helped the refinery expand while nearby home values fell and poverty increased (Energywire, July 13, 2020).

The companies that would be freed of liability, if residents accept the settlement offers, include Shell, Pennzoil-Quaker State Co., Calumet Refining LLC and Genesis Energy LP, as well as affiliates of these firms and their insurances companies, according to a settlement offer to one plaintiff viewed by E&E News.

Pennzoil-Quaker State, a Shell subsidiary, was the original company sued in 2001. Calumet purchased the refinery that same year and later expanded the operation. Genesis is a midstream oil and gas company based in Houston, with assets in Shreveport and south Louisiana.

A spokeswoman for Calumet confirmed the company was party to the litigation but said she could not comment on a settlement. Neither Shell nor Genesis provided comment by press time.

Residents say the settlement offers were sent out earlier this year by the Baton Rouge law firm Walters, Papillion, Thomas, Cullens, the primary attorneys negotiating with the oil companies.

Roughly 4% of claims include cancer, according to the settlement website. Several people with a claim are marked as deceased.

Velma White, one of the original litigants, said the offers were so low they amounted to "an insult."

"A lot of people’s health has failed. Some have lost their lives," the 71-year-old Shreveport resident said. "And this is the best they can get?"

White, who bought her home in the Queensborough neighborhood around the plant in the 1980s, said she’s experienced several health problems associated with plant pollution, including nausea, trouble breathing, bronchitis and a miscarriage in 1987.

Half of her settlement check would go to a combination of legal fees — at 35% — or to pay off prior Medicaid and Medicare debt — 15% of the claim.

Her net settlement would be $2,500, according to the offer letter viewed by E&E News.

White’s daughter, Luberta Daughtry, also sued the company in 2001 after suffering renal failure and a mass on her lung. Her offer is $16,000 before fees and debts are subtracted.

To receive checks, residents have to first sign a waiver freeing the companies and their affiliates from all claims against them and any future claims, according to a letter from attorneys.

White said some people in the neighborhood may not understand that they are signing away their rights to hold the oil companies liable for health or property damage in the future. A longtime organizer on refinery pollution in Shreveport, White said the plaintiffs’ lawyers should have held community meetings rather than sending out individual offer letters.

The 1st Judicial District Court in Shreveport appointed a retired Louisiana judge to act as a mediator in managing the settlement with claimants.

The residents’ lawyers urged residents, in a Jan. 25 letter, to move quickly and accept the deal, saying it could be withdrawn. The companies could also retract their offer if not enough residents accept, they said.

The lawyers further wrote that it would be "difficult, if not impossible," to fight for more money due to Louisiana’s high burden of proof for pollution-related illness.

"Stated plainly, accepting this settlement demand is your best ‘and most likely only’ chance to make any recovery as a result of this litigation," they wrote.

The law firm did not respond to several calls and emails for this story.

Anne Rolfes, a community organizer and director of the Louisiana Bucket Brigade, said residents are often forced into settlement negotiations like the one with Pennzoil and have little leverage to increase offers.

"The pollution drives down their property values. So, what was their greatest asset is of no value. Their health is destroyed," she said. "This is the system."

She also lamented that the Medicaid and Medicare debts are subtracted. In poor areas around a refinery, health debt is common, she said.

White said she doesn’t plan to take the $2,500 deal but understood that other people in the case may.

"I can’t miss something I never had," she said, promising to continue to organize and oppose the plant, which she believes should either pay to relocate residents or be relocated. "I’m not intending to fold."