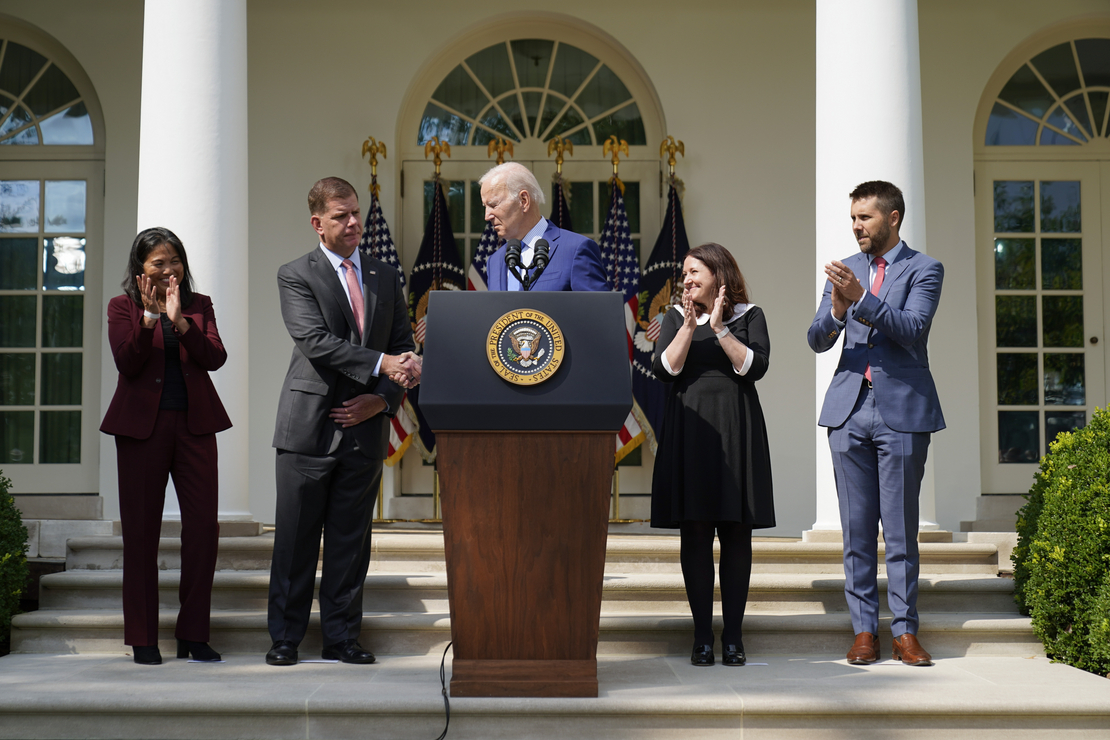 President Joe Biden is pictured on Thursday shaking hands with Secretary of Labor Marty Walsh as he speaks about a tentative railway labor agreement in the Rose Garden of the White House. Behind them (left to right) are Deputy Labor Secretary Julie Su; Celeste Drake, Made in America director at the Office of Management and Budget; and National Economic Council Director Brian Deese. AP

Railroad owners and unions reached a tentative agreement on a labor contract after a marathon bargaining sessions and a personal appeal from President Joe Biden, averting a strike that could have stalled the U.S. economy and put a stranglehold on America’s energy and chemical industries.

The deal was announced after about 20 hours of talks at the Labor Department’s office. Biden spoke personally with the negotiators at about 9 p.m. Wednesday and urged them to consider the impact a strike would have on families, farmers and businesses, according to a person familiar with the talks who requested anonymity to discuss closed negotiations.

The contract includes raises totaling about 24 percent and $5,000 in bonuses over five years and caps health care costs, the unions representing engineers and conductors said in a statement. Workers also won concessions on working conditions, including time off for illnesses and routine medical appointments.

Biden, flanked by Labor Secretary Marty Walsh, called the tentative deal “a win for America” in remarks from the White House Rose Garden.

The contract would result in an average payout of $11,000, according to the Association of American Railroads. The deal still has to be ratified by union members. Meanwhile, some industrial groups say the railroad companies still need to address systematic problems with on-time deliveries and service disruptions.

The companies and workers were in contract talks for more than two years, and a strike was scheduled to begin as soon as Friday.

About 70 percent of the country’s coal shipments travel by rail, and chemicals make up the second-largest freight category (Energywire, Sept. 14).

As the deadline approached, railroad companies began curtailing shipments of chemicals and other hazardous materials so they wouldn’t be stranded in the event of a strike. Amtrak, whose passenger trains typically use tracks owned by freight railroads, started canceling long-distance service for most of the country.

Biden appointed a presidential emergency board in July to help find a settlement between the freight rail companies and the dozen or so unions that represent the rail industry’s 115,000 workers. More than half of the unions had already agreed to new contracts based on the board’s recommendations.

The unions representing engineers and conductors — the Brotherhood of Locomotive Engineers and Trainmen and the International Association of Sheet Metal Air, Rail and Transportation Workers’ Transportation Division — held out, largely because of concerns about working conditions.

Union members complained of working for weeks without time off and being punished and even fired for taking sick time, according to local media reports.

“We listened when our members told us that a final agreement would require improvements to their quality of life as well as economic gains,” the two unions said in a statement.

The unions argued that the long hours and tough working conditions caused thousands of workers to quit the railroads, leading to freight delays and other problems.

Some industrial groups, including the American Petroleum Institute, urged Congress to step in to resolve the dispute.

Republican Sens. Richard Burr of North Carolina and Roger Wicker of Mississippi on Wednesday called for passage of a resolution to mandate the recommendations from Biden’s emergency board (E&E Daily, Sept. 15).

“If the trains stop running, our economy grinds to a halt,” said Wicker, ranking member of the Senate Commerce, Science and Transportation Committee.

The unions pushed congressional leaders to stay out of the negotiations and allow the two sides to reach a settlement at the bargaining table, according to a statement from the engineers and conductors unions.

Senate Majority Leader Chuck Schumer (D-N.Y.) praised the results on the floor of the Senate this morning.

“The best part is that union leadership, representing tens of thousands of railway workers who have worked themselves to the bone over the course of the pandemic, seem to have secured the better pay conditions for their workers,” Schumer said. “The episode is a reminder that workers are what make the wheels of our economy turn, in this case literally.”

House Transportation and Infrastructure Committee Chair Peter DeFazio (D-Ore.) noted that the contract calls for the biggest salary increases in 45 years. “At a time when the railroads reap record profits, it is confounding that these changes could not have been agreed upon sooner,” he said in a statement.

The railroads’ labor problems have been intertwined with the broader concerns about the railroad industry’s performance.

The number of railroads has shrunk as their owners have consolidated, and the workforce has dwindled as railroads adopted a system called precision scheduled railroading that was aimed at making the system more efficient.

Shippers, represented by the American Chemistry Council and the Association of Fuel and Petrochemical Manufacturers and other trade groups, have complained about systemic delays and other problems including lost shipments.

“Even without the threat of a shutdown or a shutdown, there are major problems that existed before this week that are likely to continue unless something changes,” Scott Jensen, a spokesperson for the chemistry council, said in an interview.

This story contains material from the Associated Press.