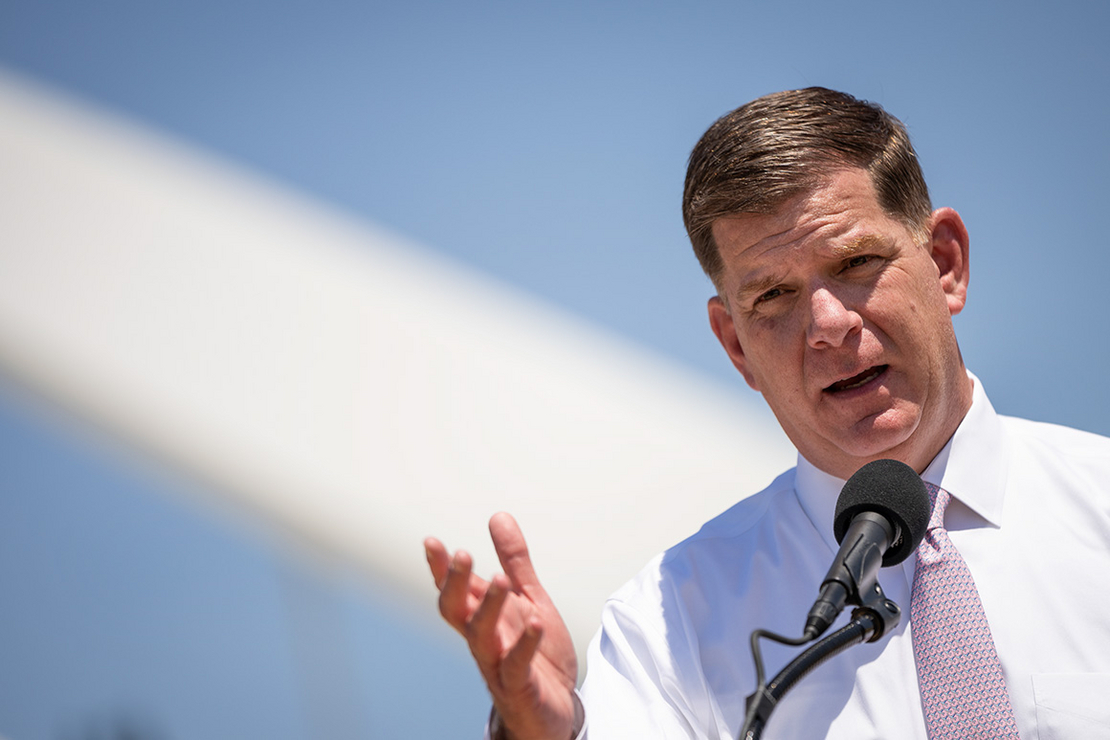 Labor Secretary Marty Walsh talks to the press after touring a construction site atop the new Frederick Douglass Memorial Bridge in Washington. The Labor Department yesterday proposed a rule change that would let retirement managers consider climate risk and other factors when investing. Drew Angerer/Getty Images

The Biden administration is taking steps to undercut former President Trump when it comes to climate change and investing.

The Labor Department released a proposal yesterday that would roll back two Trump-era rules that make it tougher for retirement plan managers to consider environmental and social risks when investing on their clients’ behalf.

The proposed measure is intended to remove barriers that pension and retirement plan sponsors face when they try to factor climate change and other sustainability issues into their investments.

It would do so by clarifying a wonky but important point.

Plan sponsors subject to the Employee Retirement Income Security Act of 1974 can — but in many cases should — consider social and environmental factors and risks while making investment decisions. Further, the measure says plan sponsors can set sustainable funds as clients’ default option — which the existing rules prohibit.

“A principal idea underlying the proposal is that climate change and other ESG factors can be financially material and when they are, considering them will inevitably lead to better long-term risk-adjusted returns, protecting the retirement savings of America’s workers,” Ali Khawar, the acting assistant secretary for the Employee Benefits Security Administration, said in a statement.

That sentiment marks a major departure from the agency’s approach to ESG investing during the Trump administration.

In 2020, the department under Trump adopted two rules focusing on key elements of so-called ESG investing.

The first called on plan sponsors to prioritize future retirees’ profits above all else — and required them to prove that any sustainable funds they offer would not cost their clients dollars when compared with traditional options.

The second made it more complicated for plan sponsors to throw their weight behind shareholder proposals — a rising number of which aim to push companies to take meaningful steps on issues such as global warming and workplace diversity.

Both rules led to fierce pushback from finance firms, environmentalists and shareholder advocacy groups. Many argued the rules were poorly constructed, and that issues such as the clean energy transition pose a tangible threat to workers’ retirement savings — which are invested in massive funds that span every sector of the economy.

In response to those concerns, the agency said last March that it would not enforce the Trump-era measures.

Not long after, President Biden in May signed an executive order that called on Labor Secretary Marty Walsh to ensure families’ life savings are safe from the threats of climate-related risks. Doing so, the directive said, should include proposing a rule to “suspend, revise or rescind” the two controversial measures from the year prior (Climatewire, May 21).

“The proposed rule … will bolster the resilience of workers’ retirement savings and pensions by removing the artificial impediments — and chilling effect on environmental, social and governance investments — caused by the prior administration’s rules,” Khawar said.

The move was welcomed by progressive groups and shareholder advocates. The environmental nonprofit Ceres, for instance, said the new rule would shield more than $10 trillion in assets and 141 million workers and other beneficiaries from the threat of climate change.

The new version, Rothstein added, "shows the Biden administration’s commitment to protecting the savings of hardworking Americans and ensuring they are not needlessly exposed to the significant financial risks of climate change."

The public will have 60 days to comment on the proposed rule once it is published in the Federal Register.