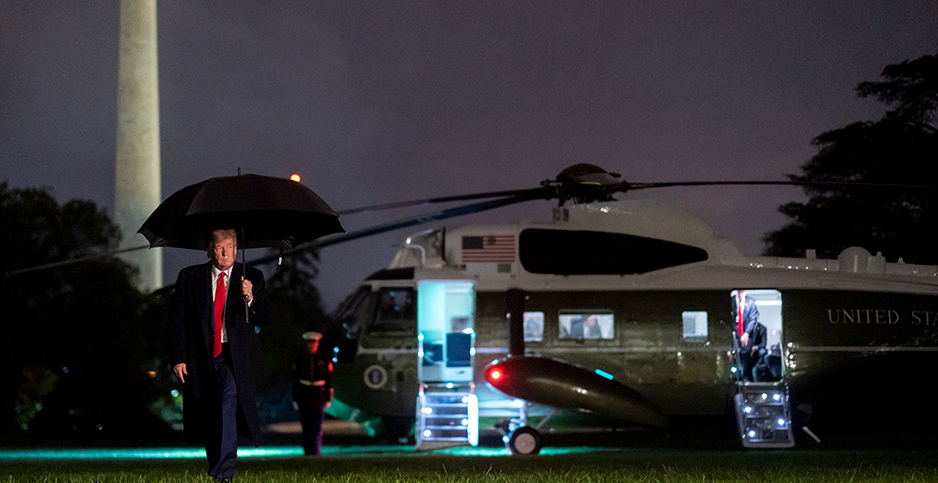 President Trump after disembarking Marine One last week. He signed stimulus legislation that offers financial assistance to the airline industry without requiring it to address climate change. Tia Dufour/White House/Flickr

When the French government bailed out the airline industry earlier this month, it conditioned the aid on climate action.

Under the terms of the bailout, Air France must slash its carbon emissions, invest in sustainable fuels and stop competing with high-speed rail.

It was a much different story in the United States.

In March, Senate Democrats mounted a push for airline industry assistance to come with climate strings attached. But they faced staunch resistance from Republicans, and the effort failed.

The different outcomes in the two countries stemmed from a variety of factors, according to experts who study clean aviation.

Chief among them: the lack of an extensive high-speed rail network in the United States and congressional Republicans’ resistance to climate action in the coronavirus response.

"There are a number of reasons the U.S. bailout did not contain environmental conditions. One big reason is that there are few alternatives to flying in the U.S.," said Dan Rutherford, program director for marine and aviation at the International Council on Clean Transportation.

The coronavirus pandemic has led to a historic drop in demand for air travel, prompting economic rescues from governments around the globe.

In France, the government agreed to a €7 billion ($7.6 billion) bailout of Air France that included several green requirements.

In particular, the company will be required to slash its carbon emissions 50% by 2030 compared with 2005 levels, halve the carbon emissions of its domestic flights by 2024 and have 2% of the fuel used by its planes be derived from sustainable sources by 2025.

The last requirement was possible because France — like many countries in Europe and Asia — has a comprehensive network of high-speed rail routes. The trains are operated by SNCF, the state-owned rail company, and they typically cruise at 200 mph.

It’s a different picture in the United States, where Amtrak maintains more limited routes and operates at an average speed of 65 mph.

"All trips under 500 miles should be all trains. The difference is that in America, we don’t have the train tracks built," said Andy Kunz, president of the U.S. High Speed Rail Association.

"Instead of pouring $50 billion to bail out the airlines and go back to business as usual, we should take half that money and build railroads," he added.

Kunz was referring to the Coronavirus Aid, Relief and Economic Security (CARES) Act passed by Congress in March, which provided roughly $50 billion for the airline industry in the form of grants and loans.

In early negotiations over the package, eight Senate Democrats sent a letter calling for airlines that receive aid to reduce their carbon emissions (Climatewire, March 19).

But Senate Republicans balked at the proposal and accused Democrats of seeking to revive the Green New Deal — a progressive proposal that would rapidly wean the country off fossil fuels.

"Democrats won’t let us fund hospitals or save small businesses unless they get to dust off the Green New Deal," Senate Majority Leader Mitch McConnell (R-Ky.) said on the floor during debate over the package (Climatewire, March 24).

The CARES Act ended up omitting climate targets, although it did contain some worker protections. Airlines that receive aid are required to keep employees on the payroll through Sept. 30.

"Ultimately, what was agreed was a bailout of airlines with pretty strong labor protections, which will prevent 750,000 airline employees from suddenly being out of work," said Rutherford, of the International Council on Clean Transportation.

"Putting the environment aside for a second, it was probably a pretty good policy outcome," he said, adding, "Why weren’t environmental conditions included? I mean, Democrats are a minority in the Senate. So I think that’s a big driver."

Jo Dardenne, manager of aviation at Transport & Environment, said the different outcomes in the United States and France may also reflect a broader gulf in societal views.

Approximately 93% of Europeans see climate change as a serious problem, according to a 2019 survey by the European Commission. But only 58% of Americans say they’re either "alarmed" or "concerned" by global warming, according to polling by the Yale Program on Climate Change Communication.

"In Europe, climate awareness is part of the public debate much more than it used to be. We’ve even seen unions and workers start to ask for environmental conditions to be attached to bailouts," said Dardenne, who is based in Brussels.

"The U.S. is in a different space as the E.U.," she added, "when it comes to climate action at the moment."