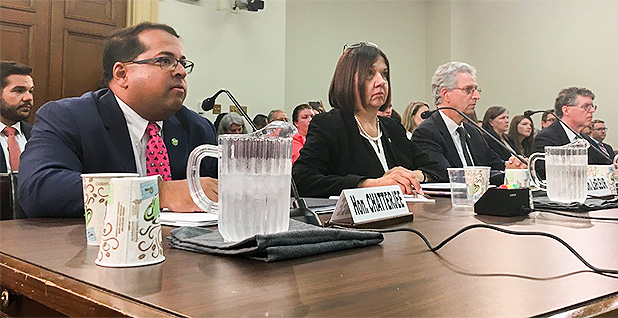 Today will be Commissioner Cheryl LaFleur’s last public meeting as a member of the Federal Energy Regulatory Commission after nearly a decade of service.

When the former New England utility regulator officially departs next month — after serving the third-longest tenure in the commission’s history — two of FERC’s five commissioner slots will be vacant.

"I think it can be done, but I don’t think it is as efficient," Senate Energy and Natural Resources Chairwoman Lisa Murkowski told E&E News. "I think it’s absolutely clear that the White House knows the urgency, the imperative, because a lot of what this administration is trying to do relies on a fully functioning FERC."

But that lineup doesn’t necessarily guarantee a smooth future for major items on FERC’s plate, as McNamee has shown a disposition to think independently, as he did in May when he opposed an order on energy storage, arguing that FERC was overstepping its mandate (Energywire, May 17).

It will mark the fourth time since 2000 with only three members out of a possible five on the job, according to FERC spokeswoman Mary O’Driscoll.

As Wood sees it, the three-member commission was "pretty common" in the early 2000s, and his experience didn’t differ from the three-member Public Utility Commission of Texas on which he’d served before President George W. Bush nominated him to FERC.

"This has paid off in deepening FERC’s knowledge and its reputation as a fact-driven, open-minded agency," he said.

Wood’s three-member year of 2002-03 was dominated by the cleanup of the California energy crisis, Enron Corp.’s bankruptcy, FERC investigations of Western power markets, a number of LNG import terminal projects and pipeline certificates, he said.

Suedeen Kelly, a Democrat who served as a commissioner under three chairs from November 2003 to December 2009, had a similar experience to Brownell’s when FERC had just three members.

She wrote a dissent on a FERC ruling regarding the interpretation of the Energy Policy Act of 2005 as to the Department of Energy’s authority to designate electric transmission corridors.

"In those situations, when you have five commissioners, you have the benefit of five perspectives. That’s very helpful, and it contributes to a better decision because it forces everybody to think broadly, and there’s lots of value in that."

"If I say, ‘I think the call should be different,’ and the other commissioner disagrees, well, then, I don’t have to talk to the chairman," she said. "So in a sense, the decisionmaking is more collaborative and coordinated."

While Murkowski acknowledged she wasn’t frustrated with FERC during those times, she said she worries that one departure could drop the commission out of its quorum, idling the agency.

"Having a fully staffed FERC is important to … the good deliberative process," she said.