Lamar Smith on space travel, ‘good science’ and the Trumps 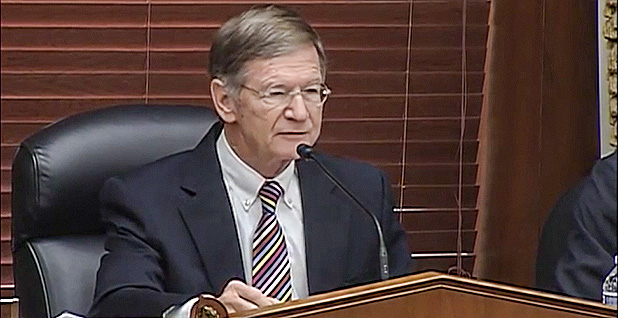 But try pinning the chairman of the House Science, Space and Technology Committee down on exactly what the government’s role ought to be.

During a recent interview in his corner office in the Rayburn House Office Building, Smith blasted U.S. EPA’s climate research as politically tainted and voiced support for President Trump’s proposed budget cuts at agencies like NASA and the National Oceanic and Atmospheric Administration that gather data on emissions, temperatures and clouds using satellites.

When pressed for what kind of work that left the federal government, the soft-spoken Texan said he supports research and development but only when it’s not in direct competition with the private sector or tied to costly and ineffective regulations like EPA’s Clean Power Plan.

As chairman of the House Science Committee, Smith, 69, has grown more vocal and aggressive as the world of politics and science collide under a Trump administration. At a hearing yesterday, Smith challenged the credibility of Science, the prestigious publication by the American Association for the Advancement of Science, and traded barbs with ranking member Eddie Bernice Johnson, a Democrat who is also from Texas (Greenwire, March 29).

Smith, who is in his 16th term representing the San Antonio and Austin areas, recently chatted with E&E News about space travel, the Trump family, the role his committee will play as the president scraps Obama-era climate regulations and those controversial stories his committee is retweeting.

You were recently at the White House for a bill signing. Did you chat with President Trump about science and technology?

No. I will say, the president wasn’t the only one in the room I was eager to speak to … last-minute entries for the bill signing were Melania Trump and Ivanka Trump, so he was sharing the limelight.

Should the federal government be studying climate change?

Absolutely … in fact, I’d like us to increase our R&D [research and development] budgets in a lot of areas. That would be a part of the mix because I just think that if you’re concerned about climate change, the best way to address it is through those technological innovations. There’s a role for the federal government and a role for the private sector, and you want it to be collaborative, not competitive.

How and where should federal climate research take place?

In some R&D, again not when they’re competing in the private sector. And then also, even when they’re not competing with the private sector, I still think the government wastes too much money again trying to promulgate regulations that are inefficient and ineffective. But we need to gather information, we need to gather data on climate change, absolutely. Do we need the satellites? Absolutely.

But what about President Trump’s proposed budget cuts?

What’s on tap for the House Science Committee this year?

In the case of science, we want to make sure we’re relying upon good science, honest science, not politically correct science to implement policies. … [W]e’re going, I think, to help agencies who in the past have been prone to using secret science … be more open with us, their representatives."

In a couple years from now, we’ll see the advent of space tourism. All it does is cost $250,000 and you can buy a ticket to ride up to 62 miles, lower Earth orbit. I actually want to do that — I shouldn’t be making fun of this — get a certificate for being a junior astronaut. I’m going to start dropping hints pretty soon about needing a government CODEL [congressional delegation] going into lower Earth orbit so I and one Democrat on the committee can be two of the volunteer passengers without having to pay our half-million dollars jointly.

What role will the committee play as the White House scraps President Obama’s climate legacy?

I don’t expect to need to issue near as many subpoenas with this administration as I did with the last. I think it was 25 with the last Congress.

What if they don’t comply?

We have three choices if they don’t, the same three choices that would apply to the object of any subpoena. We can invoke to hold them in contempt, we can file a lawsuit, and we can refer the next step to the AG [attorney general] for prosecution. I see one of those three happening, yes, and we’re still thinking about which is the best way to proceed.

Are you trying to eliminate climate research?

I think we need the right kind of research.

How should we address climate change?

I think technology is the answer. That’s what R&D is for, we don’t know what the answer’s going to be. Fifteen years ago, we hadn’t heard of fracking.

Were you aware a nonprofit group, 314 Action, had targeted you as "anti-science"?

Targeting me? Oh, who knows, I hadn’t heard.

What’s your response to the March for Science planned for April 22?

Reporters Christa Marshall and Hannah Hess contributed. This interview has been edited and condensed.