Lamborn scrambling to get on ballot 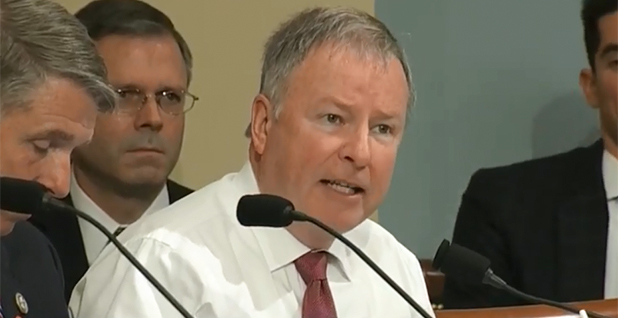 Colorado Republican Rep. Doug Lamborn and his re-election team are scrambling to get on the primary ballot after the state Supreme Court bumped him out this week.

The senior Natural Resources Committee member used out-of-state residents to gather voter signatures to gain a slot, and the state court ruled Monday that his name will not appear on the June 26 primary ticket.

State law requires that Colorado residents be the ones to collect such signatures. Candidates can either make the ballot by gathering signatures or via a caucus of party insiders.

"We recognize the gravity of this conclusion, but Colorado law does not permit us to conclude otherwise," the court wrote.

Lamborn’s campaign issued a statement saying it will challenge the ruling in federal court. A potential complaint could point to current rules for ballot initiatives, which do not require that residents be the ones to gather signatures.

Depending on the outcome of a potential suit, Lamborn could wage a write-in campaign for the general election, leaning on his name recognition and fundraising advantage.

Lamborn, who is rumored as a possible heir to lead the Natural Resources Committee when Utah Rep. Rob Bishop (R) retires, has spent his six-term congressional tenure fighting regulations of all kinds, including environmental rules he decries as "paralysis by analysis."

While Lamborn’s Colorado Springs district is not a drilling hub, he has still been a friend to Colorado’s powerful extractive services sector.

Oil and gas companies are Lamborn’s second-largest donors over the course of his career, according to data from the Center for Responsive Politics.

"He’s been a comfortable vote for those interests over the years," said Colorado College political science professor Tom Cronin.

Lamborn has a 3 percent lifetime score from the League of Conservation Voters and a 78 percent rating from the U.S. Chamber of Commerce. He opposes most federal limits on greenhouse gas emissions.

"The federal government should not cripple our economy and burgeoning domestic energy industry with more onerous fees and regulations designed to curb the possibility of climate change hundreds of years in the future," he wrote on a 2014 candidate survey for Colorado Public Radio.

Jessica Goad, deputy director for Conservation Colorado, said, "This unique district in the Pikes Peak region deserves a representative who prioritizes Colorado values, not someone who is allegiant to polluting industries."

Lamborn used to lead the Energy and Mineral Resources Subcommittee, with jurisdiction over mining and drilling. After a shuffle, he now heads the Water, Power and Oceans Subcommittee.

Whether he makes the ballot or not, there is little chance Lamborn’s 5th District flips blue this fall. President Trump won the area with 57 percent of the vote in 2016, while Lamborn won re-election by 32 points.

"It’s generally viewed as one of the top 15 most Republican districts in the country," said Cronin, who ran for the seat and lost as the Democratic nominee in 1982.

So far in the midterms, the drama has been in the GOP primary, with two prominent state officials entering challenges against Lamborn.