Land buying out; energy and reorganization in 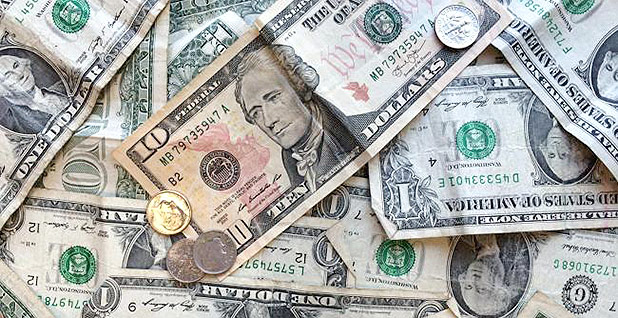 The Trump administration is requesting $11.7 billion for the Interior Department for fiscal 2019. @USGAO/Twitter

The Trump administration has requested $11.7 billion overall for the Interior Department in fiscal 2019, a decrease of $1.8 billion from its fiscal 2018 proposal.

"We focus on rebuilding our infrastructure to include our national parks, wildlife refuges and our responsibility for world-class education for Native American students. This is a significantly different budget than last year," said Interior Secretary Ryan Zinke in a budget briefing with reporters, adding that the department "spent a lot of time last year looking at revenue."

The fiscal 2019 proposal would reduce land acquisition funding to $8 million — from current spending levels of $154 million — and "would instead focus available discretionary funds on investing in and maintaining existing national parks, refuges and public lands."

The budget blueprint, like the infrastructure plan, proposes a "public lands infrastructure fund" that would provide up to $18 billion over a decade. The money would be "derived from 50 percent of incremental energy leasing receipts over 2018 budget projections." It also highlight’s Interior’s role in streamlining the environmental permitting process, which the White House wants to cut back to two years.

Additionally, the budget would fund "100 percent of the rolling 10-year average cost for wildfire suppression" in the Interior and Agriculture departments — the latter being where the Forest Service is housed (see related story).

Zinke has proposed dividing the department’s various bureaus into 13 geographic regions across the country based on watershed and other natural resource boundary lines. The change is intended to improve agency collaboration and efficiency by shifting more authority from Washington to communities out West, where the government owns huge swaths of land.

The administration originally had planned to request $11.3 billion for fiscal 2019. But the department also would receive an additional $339 million based on an addendum included by the Office of Management and Budget in light of last week’s two-year bipartisan budget agreement approved by Congress.

An additional $68 million also would go to the payments in lieu of taxes (PILT) program, which provides critical funding to communities with federal lands — the administration’s recognition of the program’s popularity among lawmakers. That boost, more than the $397 million the administration proposed for fiscal 2018, would bring PILT to its current funding level of $465 million, the amount Congress approved last spring.

Early reaction to the budget from outside groups was across the spectrum.

"It’s clear Secretary Zinke has no interest in managing our public lands for future generations, just an interest in being a rubber stamp for drilling and mining," said Center for Western Priorities Executive Director Jennifer Rokala.

But National Ocean Industries Association President Randall Luthi called the budget proposal "forward-thinking" and one that will "enable industry to evaluate and explore for offshore energy resources safely while protecting the environment."

BLM would receive $1.04 billion under the Trump request, down from current funding levels of $1.26 billion.

The budget slashes the amount of money available for BLM land acquisitions, to an estimated $3 million from current spending levels of $22 million. That $3 million is apparently money derived from the Land and Water Conservation Fund, which is carved out from a portion of revenues from offshore oil and gas leasing.

"To focus resources on caring for current DOI lands, the FY 2019 budget does not request funding for major land acquisition projects and proposes a partial cancellation of prior year balances," the budget says.

The proposed budget also would significantly reduce the amount of money for BLM "resource protection" activities to $75 million from current spending levels of $119 million.

The administration’s budget vows to support funding for law enforcement within Interior’s various agencies, including the U.S. Park Police and the Fish and Wildlife Service, but does not offer specific amounts.

The president’s budget statement notes it will also focus on Interior-related law enforcement on public lands near the U.S.-Mexico border.

"The budget supports law enforcement efforts on the Nation’s public lands to keep visitors and natural resources safe, including DOI’s efforts to collaborate with other agencies supporting border security efforts," the document says.

Interior manages nearly 800 miles of border territory, or about 40 percent of the boundary as it crosses California, Arizona, New Mexico and Texas.

"DOI has proposed an aggressive strategy for leasing offshore oil and gas under its Draft Proposed Program for 2019-2024," the budget notes. "Onshore, the Administration is taking steps to initiate oil and gas leasing in the coastal plain of the Arctic National Wildlife Refuge, which was recently authorized by the Congress."

The National Park Service would receive $2.73 billion, down from current levels of $2.93 billion.

National parks would get $257 million under the new budget plan to spend on deferred maintenance projects, which now total more than $11 billion. Money would come from a new public lands infrastructure fund that would come from energy leasing receipts.

Administration officials said that expanding energy development on federal lands and waters could bring in an additional $18 billion over the next 10 years to pay for infrastructure projects in national parks and on other public lands.

At the same time, the budget would eliminate $20 million for the NPS centennial challenge fund, which provides federal funding for matched donations for maintenance projects.

Trump also wants to scrap $19.5 million in funding for the Heritage Partnership Program, money that has been used to conserve natural, historic, cultural and recreational sites. Officials said the program "is secondary to the primary mission" of the Park Service and should be transitioned to state, local or private entities to manage.

The proposed cuts come after Trump last year recommended a 13 percent reduction for the National Park Service, including the elimination of 1,242 staff members, or 6 percent of the entire workforce. Park advocates said it would have been the largest reduction since World War II, but it was never approved by Congress.

As for the Fish and Wildlife Service, the fiscal 2019 budget proposes $1.23 billion, a reduction from the current funding level of $1.5 billion.

Last year, the Trump administration likewise requested about $1.3 billion for the agency, a cut that lawmakers thought went too far.

The proposed fiscal 2019 cuts would reduce construction, new land acquisition and headquarters costs, among other changes. The budget anticipates a roughly 6.5 percent cut in overall staffing, as the number of full-time equivalent employees is slated to fall to 6,439 from the current 6,893.

The budget would eliminate altogether funding for the Cooperative Endangered Species Conservation Fund, which provides grants to states and U.S. territories for species and habitat conservation actions on non-federal lands.

Other cuts are called for in programs including the Multinational Species Conservation Fund, which aids animals such as elephants and tigers.

Habitat conservation spending would shrink to $46 million, down from the current $71 million.

The Fish and Wildlife Service would receive $1.5 billion under a House bill for fiscal 2018, $38 million less than the fiscal 2017 level. The House’s fiscal 2018 bill also continues a one-year delay on Endangered Species Act reviews and rulemakings for sage grouse.

For a second year in a row, the White House wants a massive cut at Interior’s Office of Surface Mining Reclamation and Enforcement.

The Trump budget request considers the program duplicative, allocating $20.4 million for annual AML grants. With bipartisan support, Congress has ignored that argument. While the House has proposed a slight funding decrease to $99.7 million, the Senate wants to raise the grant total to $136.5 million.

But the White House and Congress agree on cutting regulation and technology funding for OSMRE. The Trump administration requests that funding be cut from $121 million in fiscal 2017 to $101.29 million in fiscal 2019, an even deeper cut than the $109.4 million they requested for fiscal 2018.

In stark contrast, at the Department of Labor, the Mine Safety and Health Administration would actually receive more funding under the White House blueprint for a second straight year.

Trump requested $375.17 million for fiscal 2018 at MSHA, but Congress has only proposed cutting spending with $359.98 million proposed in the House and $373.8 million in the Senate.