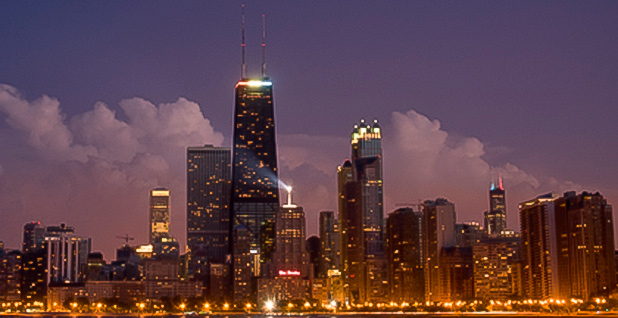 Illinois consumers have paid nearly $300 million into a fund established in 2010 to support wind and solar development and help utilities comply with the state's 25-percent-by-2025 renewable energy standard. City of Chicago

Illinois took a step last week toward shifting its portfolio to cleaner energy sources when state regulators signed off on the first long-term renewable energy procurement under the 2016 Future Energy Jobs Act.

But the 2016 law also tries to address concerns about ensuring that clean energy reaches low-income consumers. Income inequality is a challenge in Chicago but also in rural areas of southern Illinois.

The plan developed by the Illinois Power Agency sets aside $30 million for a Solar for All program that requires the state agency to procure renewable energy credits for solar projects to serve low-income consumers. The low-income funds are divided into four buckets for the development of on-site distributed generation, community solar projects, projects for public and nonprofit customers, and community solar pilot projects. In each category, 25 percent of funds is set aside for communities where income is a barrier or where environmental injustice has been an issue.

Under the program, developers would agree to sell renewable energy credits to the Illinois Power Agency, or the utility in whose service area the project is located, in exchange for an upfront payment that includes an incentive to bring projects to an underserved market.

Illinois joins other states, mostly along the coasts, that have been looking for ways to encourage and incentivize low-income solar development. For the most part, states are creating unique programs that account for their regulatory environment and the mix of energy companies operating in the state.

Obstacles to accessing solar power can be daunting. For low-income consumers, it’s upfront costs, financing and the fact that many rent instead of own their homes. Arguably, utilities and independent solar companies have been slow to nail down solutions to those barriers.

"The lending community has been a little slow to invest in projects where it’s understood the off-taker is low-income," said Melanie Santiago-Mosier, program director for low-income solar at Vote Solar.

Vote Solar and Grid Alternatives, which was involved in proceedings before the ICC, developed a policy guide to help with the rollout of low-income programs. "I am very optimistic about the low-income program and how it’s rolling out," Santiago-Mosier said.

Even the most vocal advocate of the Solar for All program, however, acknowledges that its lofty ambitions are rivaled by the challenges and work remaining to realize the program’s goals of creating a self-sustaining low-income solar market.

The plan approved last week addresses funding mechanics, incentive levels and program eligibility. Still, it’s unclear how many megawatts of low-income solar will be realized with the $30 million budget, or how quickly the first low-income solar projects will become a reality.

‘This is where the work starts’

Participants from an array of community groups, policy advocates and solar developers working together to craft the program guidelines say there’s strong interest in Solar for All, but it will take some time.

MeLena Hessel, a policy advocate for the Chicago-based Environmental Law and Policy Center, compares the job of crafting a low-income solar program from scratch to building a house. Many program details have yet to be developed, but she said the law provided a foundation and the plan approved by the ICC is like the framing.

Hessel said both the statute and the procurement plan are purposely flexible and not overly prescriptive.

"We’re still pretty new to figuring out how best to deploy low-income solar nationally," she said. "Illinois is trying to walk a line that allows some market innovation while protecting customers and providing energy savings."

"I think the IPA does a good job in the plan of marrying the practical with the legal requirements of the Solar for All program," she said.

Among the key issues addressed by last week’s ICC order, it seeks to ensure that low-income energy consumers — not other parties — reap the savings. The law requires the Illinois Power Agency to develop the plan so that low-income customers see "reasonable" economic benefits. In its order, the commission noted that while it would be difficult to monitor actual savings, contracts and vendors should have to document and verify that end-users are seeing at least a 50 percent energy savings.

The plan approved by the ICC also specifically requires the administrator of Solar for All to provide guidance and education to program vendors, community groups, local governments and others on how to facilitate low-income solar projects and energy efficiency programs.

Solar for All vendors, too, must detail how they involve communities in their projects and how they coordinate projects with a separate job training requirement in the law.

The law requires Commonwealth Edison to spend $3 million in 2017, 2021 and 2025 to train installers for Solar for All and other renewable portfolio standard projects. The Chicago-based utility made good on the first-year funding in December.

Another provision requires companies participating in Solar for All to commit to hiring job trainees for a portion of their low-income projects.

As with the low-income solar procurement plan, many details remain to be finalized to ensure that the job training program achieves its goals, said Kimberly Wasserman-Nieto, executive director of the Little Village Environmental Justice Organization in Chicago.

Little Village and other community organizations are working to provide critical "wrap-round" services to make sure segments of the population aren’t excluded because of language barriers or other challenges such as lack of transportation to job training programs that might otherwise get overlooked.

"For an environmental justice organization, this is where the work starts," she said. "We’re excited, and we’re also realistic."