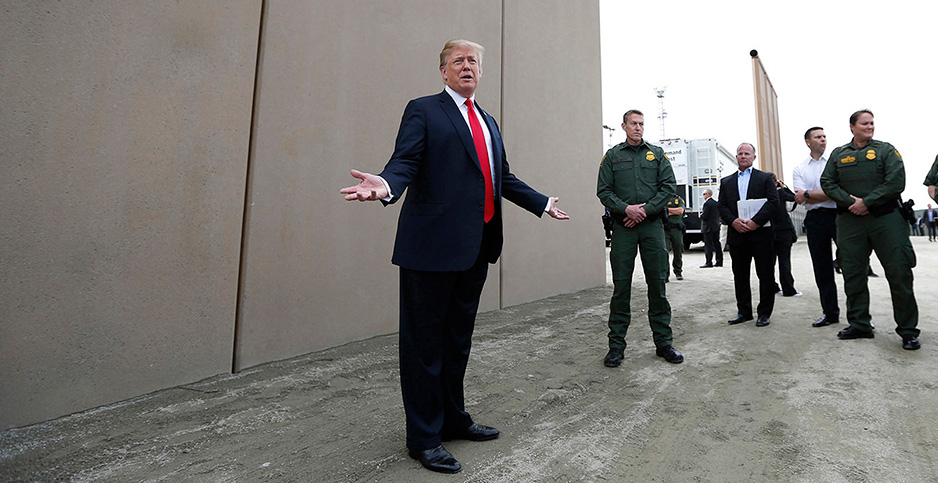 Key senators said yesterday that the Interior Department’s transfer of public lands to the military in order to facilitate construction of President Trump’s border wall with Mexico will add new tensions to the already struggling appropriations process.

Interior’s late Wednesday announcement, in which Secretary David Bernhardt temporarily transferred several hundred acres of federal lands in California, Arizona and New Mexico to the Defense Department to build the wall, came just days before the Senate Appropriations Committee is expected to dive into two of the most contentious spending bills: Interior-Environment and Homeland Security (Greenwire, Sept. 19).

The move caught Sen. Lisa Murkowski (R-Alaska), who chairs the Interior and Environment Appropriations Subcommittee and the Energy and Natural Resources Committee, off guard.

"It was a surprise to me," Murkowski told E&E News, who said she spoke to Bernhardt after the announcement. "I shared with him my surprise at not having been given a heads-up on this."

Murkowski noted next week’s expected markup of the Interior-Environment bill, which she and ranking member Tom Udall (D-N.M.) are trying to ease through the Appropriations panel by forgoing fights over contentious policy riders (E&E Daily, Sept. 19).

"We’re in the process of finalizing everything within our Interior appropriations bill," she said. "And as the chairman of the authorizing committee over these lands, I think it’s just important to have good communication between the administration and the congressional branch. And I think there was a failure there."

She said she had not yet spoken to Udall about Interior’s move but said she was hopeful it would not complicate next week’s planned markup of their bill. In a statement, Udall offered a harsh criticism of Interior’s move.

"The Trump Interior Department under Secretary Bernhardt is now party to President Trump’s phony and unlawful ‘national emergency’ declaration to build a wall that is ineffective and offensive to New Mexico’s values," he said. "The Department of the Interior is supposed to protect our natural resources, not endanger them with a border wall that will destroy habitat connectivity, harm wildlife and divide communities."

The emergency withdrawal affects 560 acres of public land managed by the Bureau of Land Management — 213 acres of which is in New Mexico.

Under the emergency withdrawal, the Army will oversee the affected land for the next three years, building about 70 miles of border barriers.

Interior said in a press release that in addition to national security concerns, the move "also responds to environmental issues caused by unlawful border crossings. Wilderness areas, wildlife refuges, as well as species and vegetation [that] are adversely impacted by land degradation and destruction caused by the creation of trails, the deposition of trash, unlawful fires, among other things."

New Mexico’s other senator, Democrat Martin Heinrich, said Trump is "abusing his power and ignoring the checks and balances that generations of American presidents have respected" and "seizing public land in order to drive a campaign agenda that divides our country rather than uniting us."

Rep. Deb Haaland (D-N.M.), chairwoman of the Natural Resources Subcommittee on National Parks, Forests and Public Lands, called the move a "land grab" that would have implications for her state’s economy.

"New Mexico relies on our public lands for our way of life and to support jobs in our outdoor recreation economy — putting the Army in charge of public lands to build an unnecessary wall along pristine landscapes and without consulting local communities or listening to environmental impact reports is foolish and wasteful," she said.

Congress may have an opportunity to weigh in on Interior’s transfers. Under the Federal Land Policy and Management Act, Interior is supposed to issue a report to Congress within 90 days that justifies the emergency withdrawal, with any corresponding vote to block Interior’s transfers to follow.

Bernhardt made no mention of that requirement to Murkowski, who said she plans to further study the matter.

"As I understand the emergency powers, it does authorize the Department of Interior to act to address the emergency," she said. "I guess we’ll see what they make in terms of the justification."

Other Senate appropriators acknowledged that the Interior transfers would likely complicate their efforts to pass as many spending bills as possible before the Sept. 30 end of the fiscal year.

Sen. Shelley Moore Capito (R-W.Va.), who as chairwoman of the Senate Homeland Security Appropriations Subcommittee is handling the spending bill that is ground zero for the wall fight, conceded that Interior’s move probably wouldn’t help matters.

"I’m sure it complicates things," she told E&E News after yesterday’s markup.

"Of course it will," Leahy told E&E News. "The idea that we can just kind of ignore things that are kept because they’re environmentally sensitive and been protected, and suddenly get rid of it, is foolish."

Several House Republicans and Democrats who sit on committees with jurisdiction over Interior were unaware of the department’s move until a reporter told them about it early yesterday.

"As you can tell, I shouldn’t be, but sometimes I’m the last to know," the Minnesota Democrat said early yesterday afternoon after wrapping up a hearing on marine debris (see related story).

Later in the day, McCollum’s communications director said the chairwoman planned to talk to her colleagues on the Appropriations Committee — specifically members who work on her panel, defense spending and legislation that funds military construction projects.

"They may follow up with a response" to the department, said Amanda Yanchury.

Republican appropriators on the Interior subcommittee were similarly in the dark about the land transfer.

"I need to find out what the implications are of it and what exactly the administration is trying to do with it," said Rep. Mike Simpson (R-Idaho).

Simpson said he isn’t opposed to a border wall in certain places "if it’s a place where a wall is necessary and will help with stemming the illegal immigration flow."

But the senior appropriator also noted that one of the problems with building a wall in general along the southern border is that inevitably, parts of it run through Interior-managed lands.

"There are implications there, and I suspect that’s what they are trying to address here," he said of the administration’s decision.

Nevada Republican Rep. Mark Amodei, whose district contains a large swath of BLM land, said he wants to review the department’s justification for the move.

Amodei, who hadn’t yet reviewed Interior’s announcement when he spoke to E&E News, speculated that the department was motivated by border security concerns at the sites it chose to transfer — and possibly by congressional "use it or lose it" spending deadlines.

The department’s rationale might be that "whatever money you had identified that you already had for expenditure for this purpose was getting ready to turn into a pumpkin," Amodei said.

Rep. Paul Gosar (R-Ariz.), a senior member of the Natural Resources Committee and chairman of the Congressional Western Caucus, said he had not yet seen the orders but that he was concerned about "eminent domain"-type issues involving land transfers between agencies.

"I’d like to look at the circumstances [of] what transpired, what was done prior to that order, because that tells you the story. Was due process given to Fish and Wildlife Services?" said Gosar, who added that he could not recall a similar example of an emergency land transfer.