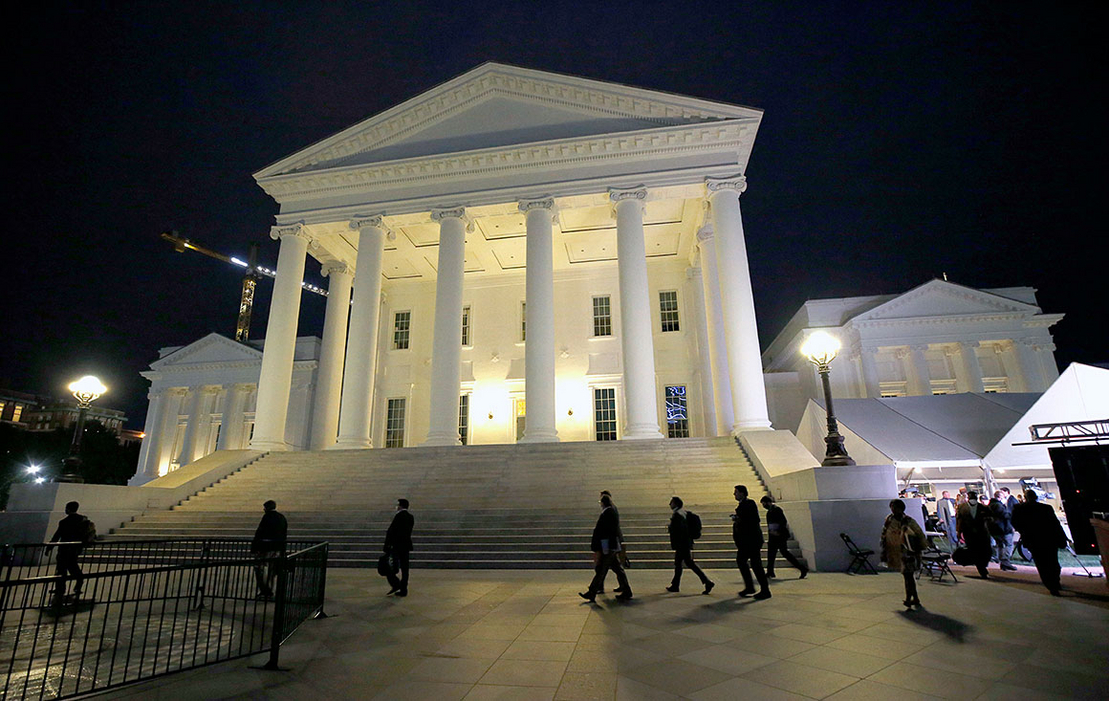 Virginia lawmakers are working on legislation aimed at protecting low-income and minority communities from sources of pollution like pipeline compressor stations or landfills. The state Capitol is pictured in Richmond, Va., in this April 22, 2020, file photo. Bob Brown/Richmond Times-Dispatch via AP, Pool

More than a year after a watershed federal court ruling, Virginia is becoming a case study of whether environmental justice protections can get enshrined into law, or be stymied by legislative and regulatory fights.

In January 2020, the 4th U.S. Circuit Court of Appeals slammed the Virginia Department of Environmental Quality (DEQ) for failing to adequately study the risks of building a natural gas compressor station along the now-canceled Atlantic Coast pipeline in a community established by freed slaves after the Civil War. The landmark decision prompted DEQ to begin a rulemaking process for determining site suitability for projects seeking air permits.

"Environmental justice is a huge priority," state Sen. Jennifer McClellan (D) told E&E News in a recent interview. "When you know that there are communities disproportionately impacted by these projects and you do nothing about it, that’s definitely not justice."

“I think it’s what the 4th Circuit case showed us is without more guidance from the Legislature, I’m not sure they’re going to quite do it,” she said.

A bill McClellan co-sponsored in the Virginia General Assembly this year would have required companies planning new major industrial pollution sources, like compressor stations and landfills, to prove they had conducted outreach to environmental justice communities before applying for a DEQ permit.

The bill had come out of a recommendation by the state’s Council on Environmental Justice, an advisory body designed to study concerns of low-income and minority communities.

"You’ve got to really consider the impact the proposed project would have on the community," said McClellan, who represents Richmond. The bill did not advance out of committee, but McClellan said she’s optimistic about the future of environmental justice reform in Virginia.

In the past couple of years, lawmakers have codified definitions of terms like "environmental justice community" and have made the Council on Environmental Justice a permanent fixture.

Those steps have laid the groundwork for Virginia to dive into the "nitty-gritty" of addressing harm to disadvantaged communities — but there is still work to be done, said Jay Ford, outreach coordinator at the Chesapeake Bay Foundation.

"Those statements of policy are now the law of Virginia," said Peggy Sanner, executive director of the foundation. "But they create few specific affirmative obligations on the part of the agencies."

Despite the legislative moves, advocates are pushing Virginia to go further with new environmental justice protections.

The Chesapeake Bay Foundation has pressed the state to improve its methods for studying risks from energy infrastructure to low-income neighborhoods and communities of color.

The Atlantic Coast pipeline compressor station slated for construction in the Union Hill community in Virginia’s Buckingham County was the project that spurred the 4th Circuit’s ruling last year.

The court admonished state regulators, warning that environmental justice is "not merely a box to be checked" (Energywire, Jan. 8, 2020).

More recently, the Chesapeake Bay Foundation has mounted opposition to a compressor station designed to move natural gas along the Mountain Valley pipeline, which follows a route through Virginia and West Virginia, similar to the planned path of Atlantic Coast.

As with the Buckingham County project, Mountain Valley’s Lambert station in Pittsylvania County’s Banister District is sited in a community first established by freed enslaved people.

The fossil fuel project is meant to propel natural gas from the still-incomplete Mountain Valley pipeline into the project’s proposed Southgate extension to North Carolina. Residents face increased risk of pollution from the planned facility, which would be located near two other existing compressor stations (Energywire, June 14).

The Chesapeake Bay Foundation and other opponents of the Lambert project say developers and state regulators have not accounted for the facilities’ cumulative effects and improperly limited an analysis of expected emissions impacts to a 1-mile radius around the compressor station (Energywire, July 20).

Critics of the project have also said that approving a permit for a compressor station meant to propel gas from the still-incomplete Mountain Valley pipeline is premature.

Despite the 4th Circuit’s ruling on the Buckingham County station, DEQ’s process for public engagement has remained "environmentally unjust," said Kay Ferguson, co-director of ARTivism Virginia, in a virtual public hearing held by state regulators earlier this year. DEQ did not respond to a request for comment.

Environmental justice protections currently under consideration in the Virginia Legislature would likely come too late to alter the course of Mountain Valley’s Lambert facility, said Ford of the Chesapeake Bay Foundation.

But, he continued, progress on the legislation would be an important step for residents in the state.

"Where the rubber meets the road is where we are now," he said.

Efforts to expand protections for vulnerable communities are coming up against economic concerns raised by some lawmakers in the Virginia General Assembly.

Among that group is state Sen. Chap Petersen (D), who chairs the committee where McClellan’s bill requiring environmental justice outreach as a condition of a DEQ permit application died.

"A major stationary source of air pollution sounds like a bad thing," Petersen was quoted in the Virginia Mercury as saying in a hearing over the bill. "It’s also a job for somebody. It’s also a manufacturing facility.

"And if we pass this bill in its current form," he continued, "I worry that it would be a job killer in rural areas like you’ve never seen before."

Petersen could not be reached by to comment for this article by publication time.

His concerns are shared by local officials drawn to the potential for industry investment to bolster stretched budgets.

In the case of the proposed Lambert compressor station, local officials and some residents cited the anticipated tax revenue to the county as their main reason for backing the project.

The facility is expected to bring in $1.4 million in tax revenue each year to the county, Charles Miller, who represents the Banister District on the Pittsylvania Board of County Supervisors, told state regulators during a public hearing.

"This could help us recruit large employers to the county," he said.

Building the compressor station would be important economic development for a part of Virginia that had been built around the now-waning coal industry, said Chadwick Dotson, a law professor and retired judge who lived in Pittsylvania County.

"We’re in desperate need of outside-the-box thinking in order to maintain an economy that will allow our children, including my own two, to live here and prosper," Dotson said in public comments.

Concerns about the economic impact of codifying environmental justice standards may be overblown and could ignore potential benefits for developers, said Julius Redd, principal at the firm Beveridge & Diamond PC.

"Some of the irony of the opposition is that clear legislation can remove some of that uncertainty in standardized permitting and analysis processes," Redd said.

He added that it is important to have industry input in proposing and implementing environmental justice legislation.

The 4th Circuit’s ruling last year has led some companies to examine and revise their own business practices to "mitigate their risk of being subject to similar types of challenges," he said.

"Anecdotally, it has had an effect," Redd said of the court’s decision.

"Despite ambiguity in current regulatory processes, Mountain Valley has been and remains committed to engaging in a comprehensive and thorough regulatory review," wrote Natalie Cox, spokesperson for Mountain Valley Pipeline LLC, in an email.

"That includes robust opportunity for public participation, starting at the inception of projects and continuing through their development," she said.

Cox said the company has underwritten four $5,000 scholarships for high school students to attend a local community college and has sought to establish "long-term relationships" with residents of the majority Black community where the Lambert station would be built.

"We are proud to work cooperatively and collaboratively with all parties and remain willing to work with opponents to address their concerns," Cox wrote.

She’s hopeful that the legislation — and a version of the DEQ permitting bill she had co-sponsored — could pass in some form next year.

DEQ is also reconsidering its own approach to permitting projects in response to the 4th Circuit’s ruling last year.

The court found that it wasn’t enough for DEQ to determine that a project complied with National Ambient Air Quality Standards or Virginia’s emissions standards. Instead, the court said, the agency should have looked at how emissions would have specifically affected residents of Union Hill, where the Buckingham County compressor station would have been located.

DEQ is still in the early stages of developing a rule to address the court’s concerns, said Sanner of the Chesapeake Bay Foundation.

"My crystal ball doesn’t yet show what is going to happen in that process," said Sanner. "The question for regulators will be how to define site suitability in a way that balances or takes appropriate account of the cumulative impacts on citizens."

McClellan said that if state regulators want to get serious about addressing environmental justice, they need to consider social and health costs — not just economic consequences — to the surrounding community before deciding if a project should move forward.

Businesses are also facing pressure from customers to make decisions that have less of an impact on the environment, McClellan added.

"At the end of the day, climate change is not just a serious issue — it’s an existential issue," she said. "Attracting business, at the expense of the health of our planet, is very short-sighted."