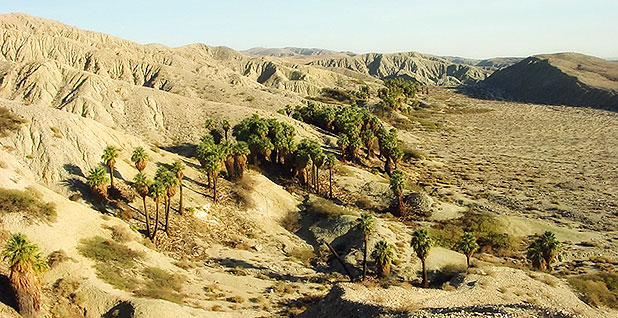 A federal court ruled that a tribe in California's arid Coachella Valley has rights to groundwater. Photo courtesy of Max Pixel.

When the United States established a reservation for the Agua Caliente Band of Cahuilla Indians, it implicitly created a right to tap the water below, wrote Judge Charles Tallman for the three-judge panel.

The ruling marks the first controlling opinion that the federal "reserved rights" doctrine applies to groundwater. The doctrine says that the United States intended to reserve water for tribes when it established reservations to the extent necessary to accomplish the purpose of the reservation.

"Water is inherently tied to the Tribe’s ability to live permanently on the reservation," wrote Tallman, a Republican appointee. "Without water, the underlying purpose — to establish a home and support an agrarian society — would be entirely defeated."

This is the first of three phases of litigation in the case. Future rulings will focus on whether the tribe has a right to a certain quality and quantity of groundwater.

The Agua Caliente Band of Cahuilla Indians has lived in the Coachella Valley since before California became a state in 1850. The tribe’s 31,396-acre reservation, laid out in a checkerboard pattern, was established by two executive orders in 1876 and 1877.

Beneath the valley is an aquifer that supports nine cities, 400,000 people and 66,000 acres of farmland.

The aquifer is the main source of water for the reservation, but the tribe doesn’t directly pump water from the ground, purchasing it instead from state water agencies. While the reservation also receives some water from the nearby Whitewater River system, there is only enough surface water to irrigate 360 acres.

Concerned about future availability of groundwater, the tribe filed the lawsuit at issue in 2013, asserting reserved rights and aboriginal rights to water from the aquifer.

The federal government joined the suit in support of the tribe.

The Coachella Valley Water District and Desert Water Agency argued that the tribe and United States were required to obtain water rights like any other private user under state water law.

In yesterday’s opinion, which upholds a district court decision, Tallman wrote that there is "no reason" to limit the reserved rights doctrine to surface waters.

"The creation of the Agua Caliente Reservation therefore carried with it an implied right to use water from the Coachella Valley aquifer," the court concluded.

Tallman noted that the doctrine — which also is known as the Winters doctrine — was in part established to provide sustainable land for Indian tribes whose reservations were located in arid parts of the country.

The Coachella Valley receives no more than 6 inches of precipitation a year.

"Survival is conditioned on access to water — and a reservation without an adequate source of surface water must be able to access groundwater," the judge wrote.

Tallman also found that neither the tribe’s lack of drilling for groundwater nor state law affected its rights to the groundwater.

The Agua Caliente Band of Cahuilla Indians cheered the ruling.

"The Ninth Circuit’s decision today validates the Tribe’s work to protect and preserve the Coachella Valley’s most important natural resource," tribal Chairman Jeff Grubbe said in a statement. "This is another critical step toward how water will be responsibly managed in the future."

The Coachella Valley Water District has defended its management of the aquifer and warned that giving the tribe groundwater rights could force substantial cutbacks in water to other customers.

The district yesterday said that it is reviewing the court’s decision.

"The CVWD board will discuss next steps in this case that could ultimately determine control over the region’s groundwater," General Manager Jim Barrett said in a statement.