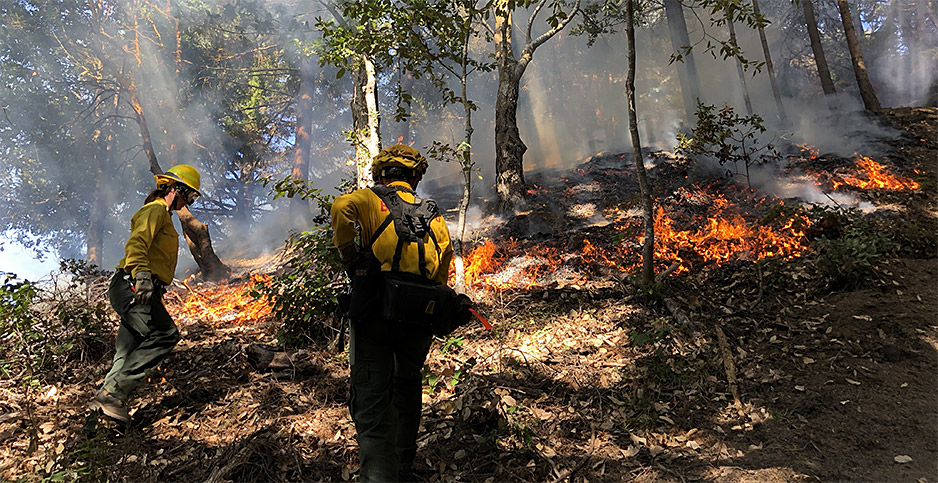 Part one of a two-part series. Click here for part two.

After watching Nebraskan farmers and ranchers team up to do prescribed burns on their fields, Lenya Quinn-Davidson was hooked on the idea of pooling resources as a way to get fire back on the landscape out West.

She and other advocates for prescribed fire in Northern California formed a group to conduct burns on private land. As word spread, interest skyrocketed.

"Our phones were ringing off the hook," said Quinn-Davidson, an area fire adviser with the University of California Cooperative Extension (UCCE) and director of the Northern California Prescribed Fire Council. "We were evangelizing this prescribed burn association model."

A county-level approach to wildfire prevention is sweeping Northern California as residents grapple with more severe fire seasons. There’s an emerging trend of community co-ops for prescribed fire, often called prescribed burn associations, or PBAs, in which landowners, other locals and fire experts band together.

Quinn-Davidson and Jeffery Stackhouse, a livestock and natural resource adviser at UCCE, helped start the first PBA on the West Coast in Humboldt County in 2018. The area is about 300 miles north of San Francisco, known for its redwood trees and year-round green grass.

Since then, 12 PBAs have officially formed in Northern California and at least 14 more are in development. Humboldt PBA co-founders have traveled around the state to host almost 30 workshops and demonstration burns.

Controlled burns are seen as one way to lessen the chance of large wildfires by reducing fuel buildup on the landscape. They have other benefits too, like preventing the onslaught of invasive species and controlling the creep of trees into grassland areas.

State and federal agencies are spread too thin to do all the necessary burning on private lands themselves.

The California Legislature has mandated that the state Department of Forestry and Fire Protection, or Cal Fire, increase its use of prescribed fire. But "there is just no way a single agency like Cal Fire can conduct as many controlled burns as needed on private properties on the areas they oversee," said Norm Brown, a member of the Mendocino County Prescribed Burn Association and former Cal Fire deputy chief. "That’s why it’s important to have these prescribed burn associations, to educate and inspire folks to be able to start putting fire back into the ecosystem like it used to be."

Last year’s wildfire season lasted so long that it slowed Cal Fire’s attempts to light its own prescribed fires. According to the Associated Press, the agency was able to deliberately burn about 17 square miles by April 30, down 40% from last year.

Cal Fire also has an agreement with the U.S. Forest Service to treat 1 million acres of public and private land using a combination of prescribed fire and other thinning techniques by 2025.

"Prescribed burn associations are really supporting that effort by getting folks trained, to have people come together and gather the resources, work within their communities, and to do these projects on private forest land and rangeland," said Christine McMorrow, resource management communication officer for Cal Fire. "They are another tool in the toolbox for getting more fire on the land."

By pooling resources, PBAs can get the work done locally in order to make a dent.

"This is just what we need in California to fill the gap where private lands are being left out of the picture," Quinn-Davidson said.

‘People are hungry to be involved’

The Humboldt PBA boasts about 100 members today; a $25 annual membership fee covers a joint equipment cache with tools and equipment as well as regular trainings and workshops.

Members of prescribed burn associations help others burn their property, and they’ll do the same in return. It’s all volunteer. In Humboldt County, about half the PBA members don’t even own property.

"People are hungry to be involved in this kind of work," Quinn-Davidson said. "We’re in the middle of a movement."

To many, that movement is personal.

Dean Hunt is a fourth-generation cattle rancher and Humboldt County PBA member who says he appreciates fire as a way to "keep a balanced ecosystem." Fires in recent years have choked his ranch with smoke, making it impossible to drive around without headlights at all hours. Friends have lost family ranches and most of their cattle to fire.

"It’s a great opportunity if we can get back to the private landowner doing these burns," Hunt said. "We’re going to make some headway into it."

California is in a long-term drought, and experts predict another active fire season. Last year, record-breaking wildfires in the state burned an area larger than Connecticut.

"We’ve got everybody’s ears because these catastrophic fires we’ve got in California have just been devastating to communities," Hunt said.

People are more willing to think about fighting fire with fire because they realize what’s going on now isn’t working, said Charnna Gilmore, director of the Scott River Watershed Council and advocate for prescribed burns.

"If we tried to have these conversations 10 years ago, I think it would be really different," she said. "Fast-forward to now, having these horrific things being watched on Facebook, YouTube and the news, I do really sense this paradigm shift that’s happening."

It’s hard to pinpoint the origin of this idea of landowners helping each other with burns. Some say it’s rooted in local range improvement associations.

But the people who started Humboldt County’s PBA were inspired by meeting with Nebraskan PBA members in 2016 and then a visit to the Great Plains in 2017.

Mark Alberts was one of those Nebraskan corn farmers. He and his neighbors conduct burns largely to encourage grassland productivity and control woody vegetation encroachment, less so to prevent wildfires.

He started burning his rangeland in the spring of 2000 to eradicate red cedar trees. At the time, he said, his name was a "four-letter word in the community because it was new and just unheard of."

Alberts is the president of the Central Platte Rangeland Alliance, which started about 10 years ago. Burns are a community event like hay stacking, with activities like barbecues and catfish feeds once a burn unit is complete.

The community approach is mirrored in California, where rancher Hunt compared the controlled burn to yearly calf branding among nearby ranches.

Nebraska’s tight-knit PBA impressed California visitors. When the weather shifted and conditions were right to burn, leaders sent out texts and emails to their group. Two hours later, 40 people were there and a 300-acre burn was sparked.

"You’d never see that in California," Quinn-Davidson said. "We miss a lot of burn windows in the West because we’re just not flexible and we’re not tuned in like that."

"They were all just wearing blue jeans and baseball caps," Stackhouse said. "Just normal people lighting stuff on fire in a very productive and professional manner. I thought, ‘This is so cool.’"

This approach is a shift in mentality, Quinn-Davidson added.

"The way we think about fire in the West is through a fire suppression lens, so it’s very highly professionalized," she said. "We think only the experts can do it, only the agencies are qualified to do it."

"For a lot of reasons, we haven’t been doing a lot of prescribed fire, and now we’re building back up," she said. "But we also have to build back up the capacity, the knowledge, the resources. Prescribed burn associations can really support that."

Coming in part two: Prescribed burners must get through red tape before any flames are ignited.