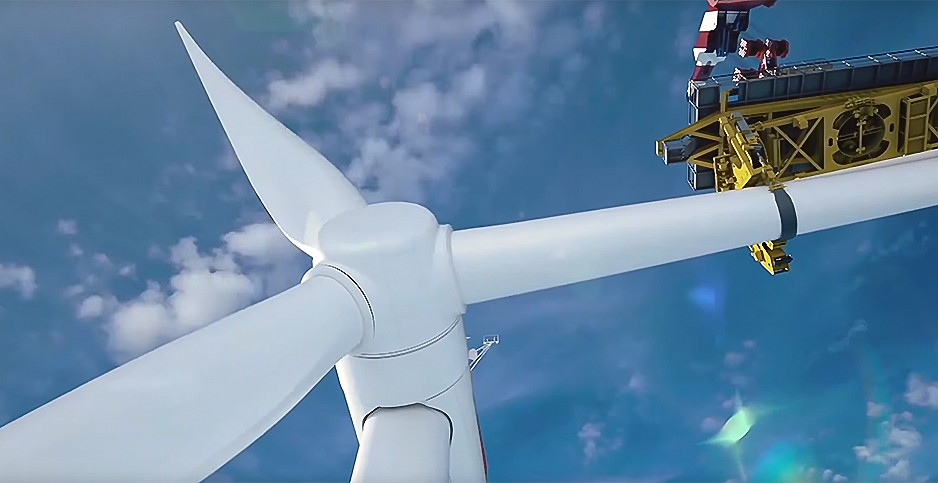 A depiction of Dominion Energy's Coastal Virginia Offshore Wind project. Each turbine's wingspan is expected to be the size of the world's largest airline jet. Dominion Energy/YouTube

In 2018, environmentalists cheered when Democrats swept the Virginia Statehouse and pledged to break the grip on the Legislature by Dominion Energy Inc., a fossil fuel giant that has wielded tremendous political clout in Richmond for decades.

But now, some are easing their adversarial position as they hope Dominion will develop the Mid-Atlantic’s first offshore wind farm. Dominion is using its influence in the state capital to muscle through a proposal to build hundreds of turbines off the coast of Virginia.

"I think we need the wind," said Will Cleveland, a senior attorney at the Southern Environmental Law Center who has often litigated against Dominion but believes wind power offers a way to combat climate change.

Yet doubts linger about Dominion’s intentions. Consumer advocates say that under years of Republican leadership, pro-Dominion policy weakened regulations, and critics wrestled with the utility over its fossil fuel generation amid growing climate fears.

Detractors say the wind farm is just a way for the company to reap big profits, pointing to its actions after the Obama administration released its Clean Power Plan to draw down carbon emissions from the power sector.

The utility secured a rate freeze in 2015 after arguing that customer bills would otherwise spike under the Clean Power Plan. The regulations never came into effect, so Dominion overcharged customers $380 million, according to miffed state regulators. Lawmakers allowed Dominion to retain much of that and reinvest it on projects in the interest of ratepayers — like the offshore wind farm.

"There is greater skepticism [now] when Dominion says something is good for the ratepayer," Cleveland said.

Dominion plans to start with a two-turbine pilot project 27 miles off the commonwealth’s shores but ultimately wants to put more than 200 turbines in the water. The first phase of an ambitious timeline is planned to be operational by 2024. The total cost of the project could hit $7.8 billion, according to the company.

"We are working with stakeholders to hopefully allow the commonwealth to move towards a strong energy policy that would benefit both the commonwealth, the environment and our customers," said Dominion spokesman Rayhan Daudani.

Unlike U.S. Wind’s Maryland project or Vineyard Wind’s Massachusetts project — which Virginia regulators pointed out was nine times cheaper than Dominion’s pilot project — the wind proposal isn’t built around a state investment or subsidy contracted to a developer. It will be accomplished through a partnership with the globe’s most experienced offshore wind developer, Ørsted A/S.

Dominion is proposing a traditional route for a regulated utility to add new generation to its portfolio, which means developing it itself, or hiring a developer to build it on its behalf, and passing the cost on to consumers over a period of years. The company then reaps profits from a regulated return on the investment.

The company’s proposal would allow it to dominate Virginia’s offshore wind space by edging out competitors and make an enormous return off ratepayers in one blow, but it inflates the overall cost of the energy to consumers, said Thomas Hadwin, an energy expert and an independent consultant on power issues for advocacy groups.

Daudani defended the project’s costs, noting that it is still early in the process.

The pilot project and Ørsted’s expertise will help identify efficiencies, he said. And technological improvements may also drive down prices by the time the turbines are raised.

Daudani also noted that price is not the only consideration — neither for Dominion nor for the state.

"The policymakers at the General Assembly have laid out that offshore wind is a priority for the common good, and the opportunity to have a large zero-carbon resource is immense, not just for the environment, but also there is an ability to anchor a supply chain in Hampton Roads that has huge economic benefits, as well," he said, referencing the Virginia port that could act as an offshore hub.

But even regulators were skeptical of the project. And that’s one point of uncertainty for forecasters considering the viability of Dominion’s offshore wind aims, said Anthony Logan, a senior analyst at Wood Mackenzie Power & Renewables.

They lambasted the two-turbine pilot as an overpriced gambit that piled the financial risk on customers for electricity that wouldn’t be cost-competitive for more than two decades.

"Customers bear almost all of the risks of this Project," members of the State Corporation Commission wrote.

But commissioners approved it, saying they were hamstrung by legislative mandates to hold offshore wind projects like the pilot in the public’s best interest.

"You have corrupted the law with ‘this is in the public interest’ and ‘refunds shall not be ordered unless’ and ‘rates may not be reduced until’ and ‘this shall be deemed reasonable and prudent,’" he wrote.

Haner, a retired shipping lobbyist, said that without the statutory lift, Dominion’s pilot wind project would never have been approved.

The wind project comes as Dominion’s political power is increasingly under fire.

Last year, a former Wall Street executive and Dominion critic, Michael Bills of Charlottesville, tossed out $1.7 million in political contributions in a bid to overtake Dominion as the largest campaign donor in the state and cast doubt on the utility’s influence.

"I went, wait a minute, they literally are writing the laws for a couple million dollars a year in contributions and some lobbyists," Bills told the Virginia Mercury in January. "I can do that."

The company has reported $2.9 million in political donations since 2010, according to the Virginia Public Access Project (VPAP). But the relatively modest campaign spending is just part of the company’s influence.

Critics like Irene Leech, a consumer studies professor at Virginia Tech and president of the Virginia Citizens Consumer Council, said the company makes itself indispensable to lawmakers. Leech has a personal opposition to the company’s proposed Atlantic Coast pipeline, which would cross family property, and is critical of the offshore wind proposal.

"The only way you could get anywhere [politically] in Virginia is if Dominion was behind you," she said.

Daudani, the Dominion spokesman, defended the company’s right to lobby for its interests.

"We have 15,000 workers here in the commonwealth," he said. "Whatever energy policy decisions are made at the General Assembly can have a huge impact on both our employees and our customers."

Many come down hard on Dominion, but its wind project makes sense with the company’s business model, said Hadwin, the energy expert. Though the grid and the electricity market are evolving faster than Dominion, Virginia still needs that company, he said.

"A lot of people want to demonize the utility, but they are acting in their own self-interest," he said.

Dominion’s proposal also comes as lawmakers have signaled their desire to break and rebuild energy policy in Virginia in what Haner, the lobbyist, called the most important energy session he’s ever seen.

The political shift in the state has eased the way for Democratic Gov. Ralph Northam’s green energy goals and brought new policy options to the table, like joining the Regional Greenhouse Gas Initiative, a cap-and-trade program.

Dominion’s critics have also seen an opportunity to loosen the utility’s grip on Richmond.

A bill would bar utilities from making campaign contributions in Virginia, though it died in committee. Another would break Dominion’s monopoly (Energywire, Jan. 8). Yet another bill, proposed by Dels. Lee Ware (R) and Jay Jones (D), aims to thaw Dominion’s rate freeze and would give the State Corporation Commission the power to open Dominion’s books.

The "Fair Energy Bills Act" would allow regulators to do a full rate case for Dominion next year, a process meant to check a power monopoly from excesses that harm consumers. Haner said the bill has promise on both sides of the aisle.

Still, Dominion’s costly offshore initiative retains significant support in the General Assembly, both among the utility’s supporters and some newcomers who may have otherwise wanted to take a tough line on the company.

For the Democratic governor’s office, too, offshore wind is a "soft spot," he said.

Dominion has positioned itself to fill that demand.

"Dominion is kind of legendary for being one of those utilities which already have a lot of sway within their states and territories," said Logan of Wood Mackenzie Power & Renewables.

"Typically, Dominion does what it sets out to do."