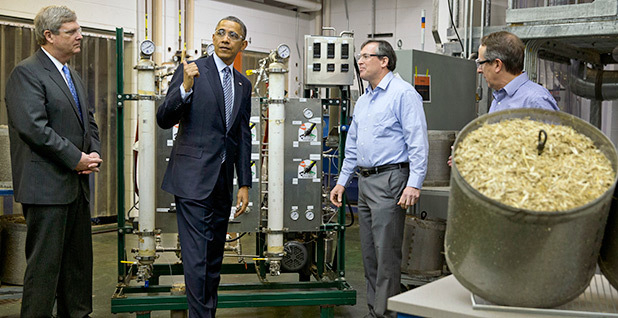 Agriculture Secretary Tom Vilsack (left) and President Obama tour a biomass conversion process area at a biotech lab in Michigan in 2014. Vilsack is the only Cabinet secretary to have served through both of Obama's terms. Photo courtesy of AP Images.

If the way to a man’s heart is through his stomach, Agriculture Secretary Tom Vilsack had the right idea for how to win over the new chairman of the House Agriculture Committee, Rep. Mike Conaway (R-Texas), in 2014.

"He invited me and my wife to his house for dinner," Conaway said, remembering how Vilsack, a Democrat, reached out when the conservative congressman rose to the panel’s top slot. "His wife’s a wonderful cook."

That visit to Tom and Christie Vilsack’s home in northwest Washington, D.C., as part of a small group dinner gave Conaway a positive impression of the politician-turned-Agriculture secretary that isn’t unusual in Congress. Vilsack has built good relations with Democrats and Republicans and is the only Cabinet secretary to survive both of President Obama’s terms.

Lawmakers and lobbying groups give Vilsack, a former governor of Iowa, high marks for implementing two multiyear farm bills. He’s brought together groups that see issues differently, listening to both sides and seeking solutions, they say. He has led the Obama administration’s fight for healthier diets, especially for children. When Obama was looking for someone in the administration to lead an effort against opioid use in rural areas, he picked Vilsack, who as a child witnessed his own mother’s struggle with alcoholism.

In an interview, Vilsack said the dinners help him and lawmakers relate to each other. "We thought it would be helpful to have these dinners be bipartisan so we could get to know each other as people," he said. The Vilsacks have hosted about a half-dozen such gatherings in eight years, and they usually feature fewer than 10 people around the table.

And while he’s occasionally clashed with Conaway and others on issues ranging from cotton to fighting fires in national forests under his jurisdiction, Vilsack’s small-town background, plain-spoken demeanor and ability to forge ties across party lines have helped him keep lines of communication open, lawmakers and interest groups said.

"He’s a small-town guy," Conaway said of Vilsack, who was born in Pittsburgh, went to law school in Albany, N.Y., and settled in Mount Pleasant, Iowa, his wife’s hometown. "He doesn’t put on a lot airs. He’s a good conversationalist."

Not everyone likes what they hear. Groups convinced that pesticides are killing off bees and butterflies say he has been slow to respond to bee declines, which the agency doesn’t blame on farm chemicals. Conaway split with the secretary on subsidies for cotton growers, after Vilsack in February denied requests from industry and lawmakers to designate cottonseed as an oilseed eligible for certain farm payments.

"I guess you could probably say he’s fulfilled our low expectations," said Katherine Paul, associate director of the Organic Consumers Association, which has criticized Vilsack for his close relations with Monsanto Co., maker of bioengineered seeds. "He’s a staunch supporter of biotech and industrial agriculture, a failed and failing model."

He’s had occasional flubs. The department came under ridicule in 2012 for encouraging employees to participate in "meatless Mondays" at the Department of Agriculture cafeteria as a way to "reduce your environmental impact" — a piece of advice the department said was published in a newsletter without proper clearance.

Then come politics. Vilsack and Rep. Steve King (R-Iowa), a senior member of the House Agriculture Committee, which writes many of the laws USDA implements, have sparred since they were in the state Senate in Iowa. Adding to the intrigue: Vilsack’s wife ran against King for Congress in 2012 (Greenwire, Oct. 16, 2012). The two candidates collectively spent more than $7 million, and King hung on with 53 percent of the vote — his lowest percentage since being elected to Congress in 2002.

Although King credits Vilsack with being "very capable" and intelligent, his fondest memories are of political victories over his rival. Among them: When Vilsack was governor and King a state senator, King pushed a bill through the Legislature that would make English the official language of Iowa — figuring Vilsack would feel politically compelled to sign a measure he opposed.

"That was not something he was pleased about having to do," King said.

For his part, Vilsack doesn’t exactly stake out middle ground with King.

"He is really conservative, he’s too far out there for me," said Vilsack, who described himself as neither Republican red nor Democratic blue. "I’m sort of a purple guy."

Vilsack, 65, came into the Agriculture secretary job with a political background and a personal story but little direct background in agriculture. He was orphaned as an infant and adopted by Bud and Dolly Vilsack in Pittsburgh. Before he obtained his law degree at Albany Law School in New York in 1975, he worked as a cab driver and gas station attendant. Although an outspoken advocate for healthier eating, he has battled with his weight throughout his life.

Vilsack’s political career began in 1987, when he was elected mayor of Mount Pleasant. He was elected to the state Senate in 1992 and served as governor from 1999 to 2007.

Vilsack flirted with presidential aspirations near the end of his gubernatorial term, announcing a 2008 White House bid in November 2006. He dropped out three months later, before any caucuses or primaries, and endorsed Hillary Clinton. He switched to Barack Obama after Clinton left the race. Probably the closest Vilsack ever came to being president was in January 2012, when he was the "designated survivor," absent from the House chamber, when Obama delivered his State of the Union address.

People who have worked with Vilsack say he genuinely likes his job at USDA. That and his ability to stay out of political scraps with Congress have helped him last all eight years of the Obama presidency, said John Gordley, founder of the agriculture policy lobbying group Gordley Associates and a former agriculture policy staffer for then-Sen. Bob Dole (R-Kan.) in the 1980s.

At his confirmation hearing in 2009, Vilsack dodged a question from Sen. Thad Cochran (R-Miss.) about what he might seek to change in the five-year farm bill Congress had enacted the previous year, telling the senator he’d been counseled more than once to tell lawmakers he’d simply implement the law Congress wrote. Eight years later, he may be able to thank that approach for his success in the job, Gordley said.

"The one thing he did was to recognize that Congress writes the farm bill, not the administration. They stayed out of making recommendations. It kept them out of the fray," Gordley said.

Vilsack said he came to the job with two main directives from Obama: Focus on the nutritional needs of children and on diversifying the rural economy so it’s not so dependent on traditional production agriculture.

Advocates for those causes praise his work. To King, however, the directive translates to a bigger Supplemental Nutrition Assistance Program — formerly called food stamps — that in the congressman’s view puts too heavy a burden on the federal government. The program has grown from about 19 million enrollees to as many as 47 million during Vilsack’s tenure, King said.

King said he also wishes Vilsack had been a more vocal defender of the renewable fuel standard by pressing U.S. EPA not to set biofuel blend levels lower than Congress mandated. "We didn’t have him as an advocate," King said.

On the other hand, Vilsack emerged as a vocal advocate for rural interests as EPA crafted its Waters of the U.S. regulations under the Clean Water Act, government records show, serving as an ambassador between agricultural groups and environmental advocates and policymakers within the administration (Greenwire, Nov. 18, 2015). He’s credited with changing some initial provisions of the rule that rural interests opposed.

As head of one of the biggest federal agencies, Vilsack faces challenges unique to USDA. His department delves into most aspects of rural life, from crop insurance for farmers to protecting waterways to helping isolated communities pay for water systems, sewers and expansion of internet service. Companies looking to turn crops into energy turn to USDA loans for a start.

Every Agriculture secretary walks the political line between rural and urban interests, amid pressure from lawmakers. Rep. Sam Farr (D-Calif.), ranking member on the House Agriculture, Rural Development, and Food and Drug Administration Appropriations Subcommittee, said at a recent hearing, "The department’s always sort of been in charge of rural America."

Democrats and Republicans in Congress have praised Vilsack as the Obama administration enters its final months. Sen. Jerry Moran (R-Kan.), chairman of the Senate Agriculture, Rural Development, and Food and Drug Administration Appropriations Subcommittee, complimented Vilsack at a budget hearing in March on his detailed knowledge of his department and said he hopes to emulate it on the committee.

Farr, who is retiring this year after a dozen terms in Congress, praised Vilsack at a recent hearing for building a long career and lasting through the Obama administration.

"I admire you in public service as much as anyone I’ve ever served with," Farr said, citing Vilsack’s rise from an orphanage to law school and politics. "I also really appreciate your ability to sustain yourself."

To one longtime friend, Vilsack’s record is exemplary — except in one area. While the secretary has spoken about helping beginning farmers, the department hasn’t shaken its reputation for favoring big-scale agriculture that’s harder for young farmers to break into, said John Crabtree, media director at the Center for Rural Affairs in Lyons, Neb.

Crabtree, who has known Vilsack since the secretary’s days in the Iowa Senate and called him a "remarkable" Agriculture secretary, said he thinks Vilsack’s heart is with small-scale agriculture that helps young farmers enter the business — even if his actions don’t always reflect that. The agency preserved subsidies in the last farm bill that are biased toward bigger operations, Crabtree said.

"I know he believes in it," Crabtree said. "That was a huge and fundamental failure."

Vilsack hasn’t mapped out his future after Obama leaves office and didn’t rule out staying in government work. But he also said he’s a firm supporter of term limits in government and doesn’t have his sights set on USDA if Clinton is elected president.

"There’s probably someone that can do a better job in many areas than I’ve done, and it’s important to give that individual the opportunity," he said.