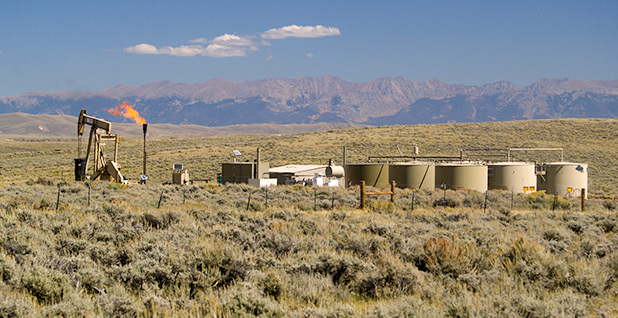 The Senate is expected to vote this week on using the Congressional Review Act to scrap Obama-era regulations on methane venting and flaring. Photo by WildEarth Guardians, courtesy of Flickr.

Dozens of law professors are urging Congress to back away from efforts to scrap an Obama-era rule aimed at slashing methane emissions from the oil and gas industry.

In a letter yesterday to Senate Majority Leader Mitch McConnell (R-Ky.) and Minority Leader Chuck Schumer (D-N.Y.), academics from across the country warned against using the Congressional Review Act to nix the Bureau of Land Management’s methane venting and flaring rule, arguing that use of the CRA would leave the agency legally vulnerable and could hamstring its ability to oversee the industry.

"Specifically, repealing this rule through the CRA may greatly impair BLM’s ability to promote recapture of wasted gas, absent new legislation from Congress," the letter said. "It will also generate considerable litigation and delay, consuming taxpayer dollars and agency resources and prolonging the wasteful practices of some oil and gas operators."

Thirty-nine law professors, two environmental studies professors and one foreign relations fellow signed on to the letter. They argue that the CRA’s prohibition on an agency issuing a rule "substantially similar" to a scrapped regulation would make it difficult for BLM to meet its legal mandate to reduce waste of oil and gas resources on public and tribal lands.

The House voted in February to kill the BLM rule, splitting mostly along party lines. Senate Republicans are hoping to vote on the measure this week before the window for using the CRA closes (E&E Daily, May 8).

Industry groups and supporters of the repeal effort have suggested that, if the CRA passes, the Bureau of Land Management could introduce a limited rule to curb natural gas waste. Before President Trump took office, the CRA had been successfully invoked only one time, and the legal implications of introducing a "substantially similar" rule remain untested (Energywire, Feb. 1).

"Rest assured that if the BLM issues a new regulation that touches upon these issues, they will be sued, and the argument will be made that this is a ‘substantially similar’ rule," Pidot said. "That will tie things up in court for years, expend tons of resources from the agency and potentially have the effect of broadly constraining the agency in the future. We just don’t know."

The methane rule includes caps on methane flaring and requirements that operators address leaks and develop plans to minimize waste before drilling. All of those elements could arise in future regulatory efforts and face challenges for being "substantially similar," the letter says.

Pidot, a former Justice Department attorney who also served a stint in President Obama’s Interior Department, said he hopes the letter wins over a few senators who have not yet signaled how they plan to vote.

"I hope that having the academics weigh in on what this resolution would do and what threats it poses to the future of managing oil and gas development on public lands would have some effect on one or two senators who aren’t just going to follow lockstep in repealing regulation after regulation through the CRA," he said, adding later: "I think it’s more political posturing than anything else as part of this anti-regulatory zeal that Congress has right now to just sort of rip away everything that’s been done, but I think it’s misguided."

Adjusting the regulation through the rulemaking process presents its own legal complications, said Robert Dillon, spokesman for the American Council for Capital Formation, which is leading a campaign to support the CRA.

"If you go through a full regulator process, you’re going to tie up Interior for a year, and then you’re going to open new avenues of legal challenge," said Dillon, a former aide to Senate Energy and Natural Resources Chairwoman Lisa Murkowski (R-Alaska). "The most expensive provisions of the methane rule take effect next January, and companies that are subject to it have to make a fiscal decision this year whether they’re going to invest in the technology to meet the new requirements.

"That’s not something they can wait a year to do."

Industry agrees that BLM has the authority to manage waste and is unlikely to sue the agency for attempts to regulate in that realm, Dillon said.

"The CRA does not take away authority that Congress granted BLM," he said. "It only takes away a rule that Congress feels goes beyond BLM’s authority."

Overturning the methane rule through the CRA would prohibit Interior Secretary Ryan Zinke from using other means to prevent the waste of natural gas on public lands — a duty to which BLM is bound under the Mineral Leasing Act, Leshy said.

"If the Waste Prevention Rule is overturned under the CRA, in other words, the Secretary could well find himself in a kind of Catch-22 situation," the letter says.

As the expiration date on the CRA resolution approaches, continued delays to the Senate vote indicate lawmakers in the upper chamber are encountering major pushback from their constituents, said Leshy, who served at Interior during the Clinton administration.

Sen. Maria Cantwell of Washington, the top Democrat on the Senate Energy and Natural Resources Committee, said bringing the CRA to a vote is among the items on the GOP priority list this week.

"We think it’s likely that they will," Cantwell told reporters on a conference call yesterday.

Instead of using the CRA, Zinke’s Interior should launch a rulemaking process to address the provisions of the methane rule that the new administration finds problematic, Leshy said.

"Government is complicated, and it does require you to wrestle with complicated issues," he said.

In a March 28 secretarial order, Zinke called for a 21-day review of the BLM rule to determine whether it is consistent with President Trump’s "energy independence" executive order.

It’s unclear how the review will play out if the CRA is successful. Congressional review appears to nullify Interior’s review, Leshy said.

"If the CRA passes, it seems to me there’s a substantial question as to whether they can do anything at all," he said.

Leshy criticized the new administration and Republicans in Congress for rushing CRA resolutions on a number of Obama-era regulations, including BLM’s Planning 2.0 rule (Energywire, March 8).

He said he hopes "cooler heads" like Sens. Rob Portman of Ohio and Cory Gardner of Colorado — two Republicans who could vote against their party on the methane CRA — will prevail. However, Portman last night issued a statement saying he would vote to repeal the methane rule.

The methane rule was finalized last November, and its initial requirements, including estimating fugitive methane emissions, are in effect now. Stricter requirements kick in on Jan. 1, 2018. While the CRA effort plays out, industry groups and several states are challenging the rule in court (see related story).