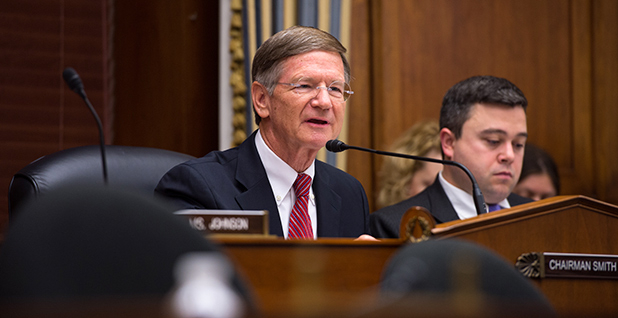 "I’m a little bit disturbed by, No. 1, over and over again, I hear, ‘Don’t ever talk about whether mankind is the main cause of the temperature changing and the climate changing,’" he said. "That’s a little disturbing to hear constantly beaten into our heads in a Science Committee meeting, when basically we should all be open to different points of view."

Brooks then said that erosion plays a significant role in sea-level rise, which is not an idea embraced by mainstream climate researchers. He said the California coastline and the White Cliffs of Dover tumble into the sea every year, and that contributes to sea-level rise. He also said that silt washing into the ocean from the world’s major rivers, including the Mississippi, the Amazon and the Nile, is contributing to sea-level rise.

Duffy responded: "I’m pretty sure that on human time scales, those are minuscule effects."

"I’m sorry, but I don’t know where you’re getting your information, but the data I have seen suggests — " Brooks said.

"Well, I’ve got a NASA base in my district, and apparently, they’re telling you one thing and me a different thing," Brooks said. "But there are plenty of studies that have come that show with respect to Antarctica that the total ice sheet, particularly that above land, is increasing, not decreasing. Now, you could make a different argument if you want to talk about Greenland or the Arctic."

Earlier this year, NASA researchers determined that Antarctica’s ice loss has accelerated in the last decade. More broadly, sea ice extent at both poles set a record low last year. Scientists are racing to better understand the changes occurring in Antarctica because much of its ice is land-based, meaning it could drive sea-level rise around the world as it melts.

"Look, if you want to characterize a temperature above today’s temperature as normal, you’re free to do that, but that doesn’t mean that’s a planet we want to live on," Duffy said.

"I don’t want to get philosophical; I’m trying to stay on science here," Posey said.

Posey responded: "I don’t think anybody disputes that the Earth is getting warmer; I think what’s not clear is the exact amount of who caused what, and getting to that is, I think, where we’re trying to go with this committee."