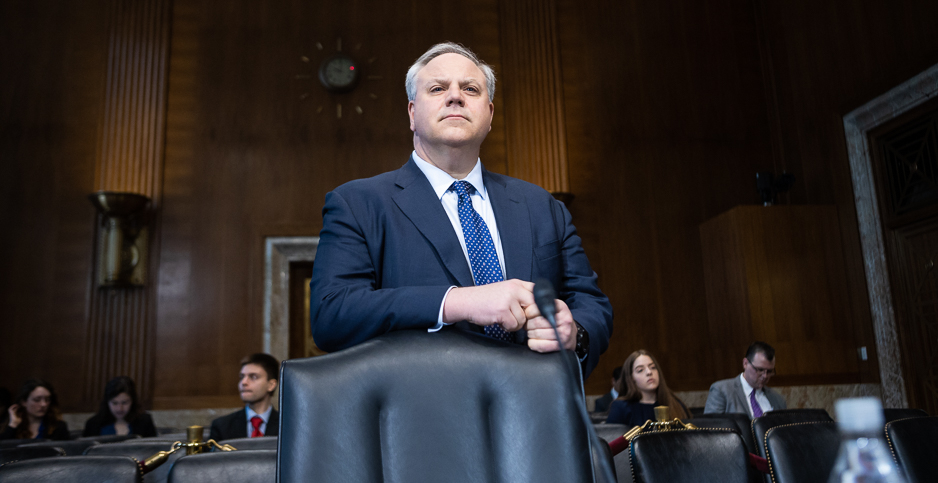 A key architect of the Great American Outdoors Act wants to see the Interior Department take "corrective action" after the agency announced sweeping changes Friday to how Land and Water Conservation Fund dollars can be spent.

"Unfortunately, in developing the new LWCF framework, DOI did not rely on the transparency, collaboration, and partnerships that have made this critical conservation program so successful for decades. This must be corrected going forward to ensure Montana voices are heard," Daines said in a statement to E&E News.

A Daines spokeswoman could not discuss specific reforms the lawmaker will seek ahead of meetings with various groups.

The senator’s remarks, however, signal that some of the Interior Department’s closest congressional allies are losing confidence in the outgoing Trump administration as it seeks to leave its mark on major policy areas before the swearing-in of President-elect Joe Biden.

Even prior to the order’s publication, Republicans on the Senate Appropriations Committee were doubling down on pledges to take over the process of prioritizing LWCF projects for fiscal 2021.

Yet Murkowski, an Alaska Republican and chairwoman of the Senate Interior-Environment Appropriations Subcommittee who voted for the Great American Outdoors Act with some reluctance, might not dislike the secretarial order. Her spokeswoman, Grace Jang, said the senator would "need more time to fully review [the] order, but has generally advocated for stronger state and local input into the management of federal lands and waters."

Jang continued, "Like many Westerners, [Murkowski] recognizes that those who actually live in the region are the best stewards of their environment."

But Daines — an appropriator who already expressed frustration with the Trump administration for missing the Nov. 2 deadline to submit the LWCF priority list to Congress — signaled Friday that he was inclined to ignore the new mandates.

"Fortunately," Daines said, "Congress maintains oversight and has a LWCF project list that better meets the spirit of the intent of the Great American Outdoors Act than Interior’s recommendations."

Other Republican critics will find willing partners in Democrats who predictably have no intention of following the secretarial order, either.

"It’s disappointing that the Secretary of the Interior is attempting to circumvent Congressional intent by adding unwanted new restrictions," said Sam Runyon, the spokeswoman for West Virginia Sen. Joe Manchin, the ranking member on the Senate Energy and Natural Resources Committee and a fellow appropriator who was one of the lead Democratic sponsors of the Great American Outdoors Act.

"Congress, which is not bound by the secretarial order, will determine the final list of projects that will receive federal funding from the Land and Water Conservation Fund," Runyon continued.

Bernhardt’s secretarial order, which was signed Nov. 9 but published Nov. 13, gives state and local jurisdictions the authority to block federal land acquisitions from taking place if they don’t want the sale to go through.

"A written expression of support by both the affected Governor and local county or county government-equivalent (e.g. parish, borough) is required for the acquisition of land, water, or an interest in land or water under the Federal LWCF program," the order reads.

This provision is strikingly similar to an amendment Sen. Mike Lee sought unsuccessfully to add to the Great American Outdoors Act during Senate floor debate this summer, though the Utah Republican’s office said the senator was not consulted during Interior’s drafting of the new order.

Bernhardt’s directive also instructs Interiors’ agencies to "prioritize acquisitions" for the Fish and Wildlife Service and National Park Service, unless a purchase would establish public access to "isolated Federal property administrated by another Bureau."

Critics call this language hostile to the Bureau of Land Management’s ability to acquire new acreage.

"This Secretarial Order is an intentional violation of Congress, in a last-minute effort to block the successful implementation of the Land and Water Conservation Fund and cement the anti-LWCF views we’ve seen from this administration for the past four years," Peterson added.

The Mountain Pact was not the only advocacy group enraged by Bernhardt’s news on Friday, as nearly a dozen conservation organizations that worked closely with Congress on passing the Great American Outdoors Act blasted the secretarial order in a succession of scathing press releases.

Jennifer Rokala, the executive director of the Center for Western Priorities, said it was "a blatant attack on private property rights."

Many critics said Bernhardt had always been sympathetic to proponents of selling off public lands and that it was never his plan to implement the Great American Outdoors Act as the law intended.

Others speculated this was his way of pushing through his own agenda in the final days of the Trump administration.

After all, the White House was at one point calling for the zeroing out of funding for the LWCF prior to supporting the full reauthorization of the program in a presidential election year.

Mostly, though, advocates expect Biden’s Interior secretary will immediately revoke the order once confirmed to the office, even though the last line of the seven-page directive states that "the termination of this order will not nullify the implementation of the requirements and responsibilities effected herein."

"The weight of a secretarial order, it could easily be overturned by a new and proper and legal secretarial order," Spivak told E&E News on Friday, saying the current order is unlikely to have any impact and would not ease the way for lawsuits over expanding the federal estate.

Ultimately, she said, "I think Bernhardt is going to do everything he can to throw as much sand in the gears before he exits."

John Gale, conservation director for Backcountry Hunters & Anglers, agreed. "Why is the Department of Interior wasting their time with a secretarial order when they’re on the way out the door?" he said.

"This must be some type of gift to the anti-public lands crowd, looking for a final flair as the administration is on the way out. … It seems like a waste of taxpayer dollars," Gale added. "A lot of people are scratching their heads why they would even do this with less than two months left."

Tracy Stone-Manning, associate vice president for public lands at the National Wildlife Federation, said her organization "look[ed] forward to working with a new Secretary of the Interior to fix this order so the conservation program can reach its full potential."

Many congressional Democrats are taking a similar approach, criticizing the order but largely dismissing it as the Trump administration’s last stand that would not have a chance to do much long-lasting damage.

"This administration can’t resist the urge to break the law, and this order is a perfect example of why they can’t be trusted to protect our environment. They have no interest in conservation; even with clear direction and guidance from Congress, they’re still doing their best to sabotage the Land and Water Conservation Fund," said Rep. Raúl Grijalva (D-Ariz.), the chairman of the House Natural Resources Committee that has oversight authority over Interior.

"They’re just trying to smash and grab whatever they can on their way out the door when they should focus on working with the Biden transition team," Grijalva added.

"This looks like a last gasp attempt to put up a variety of roadblocks that Congress has already rejected on a bipartisan basis, and it was clearly conducted behind closed doors and without giving the public any opportunity to comment," said Sen. Tom Udall (D-N.M.), the ranking member on the Senate Interior-Environment Appropriations Subcommittee and who is on the short list to be Biden’s Interior secretary next year.

"The strength of this program has been its ability to work with an array of stakeholders to protect our most important landscapes and create new recreational opportunities," Tester wrote.

"Any changes to implementing this program should be made as a result of careful, collaborative public engagement, and in line with the intent of Congress," he said. "This order meets neither standard."