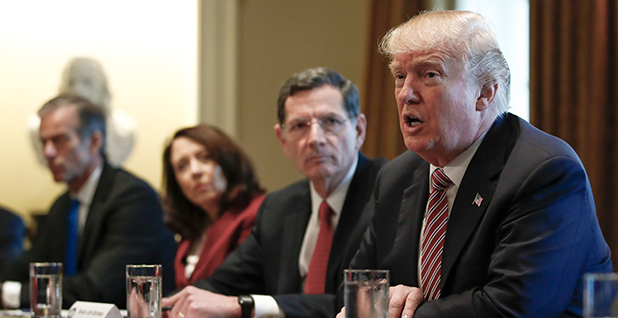 President Trump yesterday met with a group of lawmakers at the White House on infrastructure. Carolyn Kaster/Associated Press

President Trump yesterday hosted a bipartisan meeting to pitch his $200 billion infrastructure plan, but lawmakers aren’t sold on the specifics and came away with the usual talking points.

But it’s clear that both sides of the aisle see the broad changes to permitting, as well as the top-line numbers in the plan, as more of a guideline than a list of demands.

Some of the sharpest criticisms from the left so far have come in reaction to Trump’s proposed changes to the National Environmental Policy Act and other environmental laws.

Among other things, his plan would slap a two-year time limit on NEPA permitting, require the White House Council on Environmental Quality to rewrite its NEPA guidance, and make changes to the Clean Air and Clean Water acts.

Bishop said that while those proposals are in line with GOP goals on permitting, the stipulations are far from set in stone.

It might not be necessary, for instance, to put a strict time limit on NEPA. Instead, designating a lead federal agency could help reach the administration’s two-year goal for the permitting process, Bishop said.

Indeed, a NEPA shot clock could be difficult to fit into a compromise bill that could pass the Senate, especially with environmentalists already pushing Democrats to reject it.

Greens say a time limit could end up affecting other environmental laws — like the Endangered Species Act — even if they aren’t addressed directly in Trump’s plan.

"A lot of these other laws, the issues that trigger them arise during the NEPA process," said Raul Garcia, senior legislative counsel for Earthjustice. "So the idea that you’re not attacking a law because you’re not explicitly mentioning it is not true."

Some Democrats have jumped on board with those complaints.

And some, like Carper, have pointed out that the executive branch has yet to implement all the changes from the last two congressional efforts to reform permitting, the Moving Ahead for Progress in the 21st Century Act in 2012 and the Fixing America’s Surface Transportation Act in 2015.

That could mean Trump’s proposed changes will be unnecessary — and even duplicative — once the federal agencies finish working out implementation of the last two infrastructure bills.

"He doesn’t know that we did environmental streamlining in 2012," Carper said yesterday after the White House meeting. "He doesn’t know we did it again in 2015, and we’re still trying to implement those provisions that we adopted."

‘Not enough money in the world’

Lawmakers on both sides of the aisle are still scratching their heads over the federal investment featured in Trump’s plan, which would aim to leverage $1.5 trillion from state and local governments and the private sector with a $200 billion federal investment.

The administration says it wants to pay for the $200 billion with cuts across the board in the federal budget. Some critics see that idea as ironic, given that Trump’s fiscal 2019 budget plan seeks to cut the Transportation Department by 19 percent and zero out funding for the popular Transportation Investment Generating Economic Recovery grant program.

"At the same time he’s proposing this plan, he’s slashing critical infrastructure funding in his budget by cutting the Department of Transportation by nearly 20 percent, cutting funding for the Army Corps of Engineers by 22 percent and undermining essential investment in infrastructure throughout the government," Hoyer said.

Appropriators rejected similar ideas last year, and they’re unlikely to go along with them this time around.

That leaves tough choices on the table. On the administration side, Trump yesterday surprised Republicans by suggesting raising the gas tax — which hasn’t been hiked since 1993 — by 25 cents a gallon to help pay for the federal piece.

But his own administration remains hesitant about the move, even if it hasn’t taken an official position.

"The gas tax, like many of the other pay-fors that are being discussed, isn’t ideal. There are pros and cons," Transportation Secretary Elaine Chao told reporters this week. "The gas tax has an adverse impact, a very regressive impact on the most vulnerable within our society."

A hike would likely be dead on arrival on the Hill. Republicans who have a big say in the infrastructure push — like Senate Environment and Public Works Chairman John Barrasso (R-Wyo.) and Sen. Jim Inhofe (R-Okla.) — have strongly objected to it.

And others warn that it would not be a viable way to fund infrastructure into the future, with per-car gasoline consumption declining and electric vehicles set to become more common in the next few decades.

Bishop, for his part, cautioned that it’s still early and said there could be other ways to generate new revenue or use gas tax money more efficiently.

"You can’t explore everything and come up with details," he said of the White House meeting. "And there were senators there, so you can’t even actually come up with a rational idea in an hour and a half. You have to spell it out very slowly, in monosyllabic words."

Outside of the federal pay-for issue, Chao said she would like to see creative ways to fund infrastructure projects, such as using more tolls or public-private partnerships.

Democrats and environmentalists have scoffed at those ideas. New Jersey Rep. Frank Pallone, the top Democrat on the Energy and Commerce Committee, yesterday blasted Trump’s proposal.

"This week he announced his initiative, which as far as I’m concerned is no initiative at all," said Pallone, who spoke at the National Congress of American Indians’ 2018 State of Indian Nations conference in Washington.

"I think this is a total non-starter," Pallone said, adding that states, localities and tribes do not have the money to invest in such a massive undertaking.

That’s becoming a common refrain among Democrats, who have also expressed concern about public-private partnerships that could mean more tolls on highways.

But Chao said that someone has to pay the price for new infrastructure.

"These are tough decisions," she said. "We all want better infrastructure, but unfortunately there’s not enough money in the world."

For now, Trump’s push looks unlikely to bear fruit, even if lawmakers continue to tout the bipartisan nature of infrastructure bills.

Infrastructure will be a heavy lift with the midterm elections fast approaching and Congress grappling with spending issues in a seemingly endless cycle.

Still, Senate Democrats who will be key voices in the push — like Carper and Senate Commerce Committee ranking member Bill Nelson of Florida — haven’t yet publicly rejected Trump’s permitting reform proposals, even if they remain skeptical on the funding side.

"There may be some things we can do — hopefully some commonsense things — but also make sure we’re protecting our environment," Carper said.

One idea floating around on Capitol Hill is to split Trump’s plan into a handful of bills that might be more palatable, though Senate Commerce Chairman John Thune (R-S.D.) rejected that idea this week.

"There will be different pieces that’ll probably have to get melded together, but I would expect it to be one bill at the end," Thune said.

Either way, Republicans acknowledge that not every piece of Trump’s plan will be included in whatever bill emerges, especially when it comes to contentious laws like NEPA and the Clean Air and Clean Water acts.

"I think there will be give and take," Thune said. "We’ll have our input into that, and it’s got to be a bipartisan bill, so we have to get enough Democrats to vote for it."