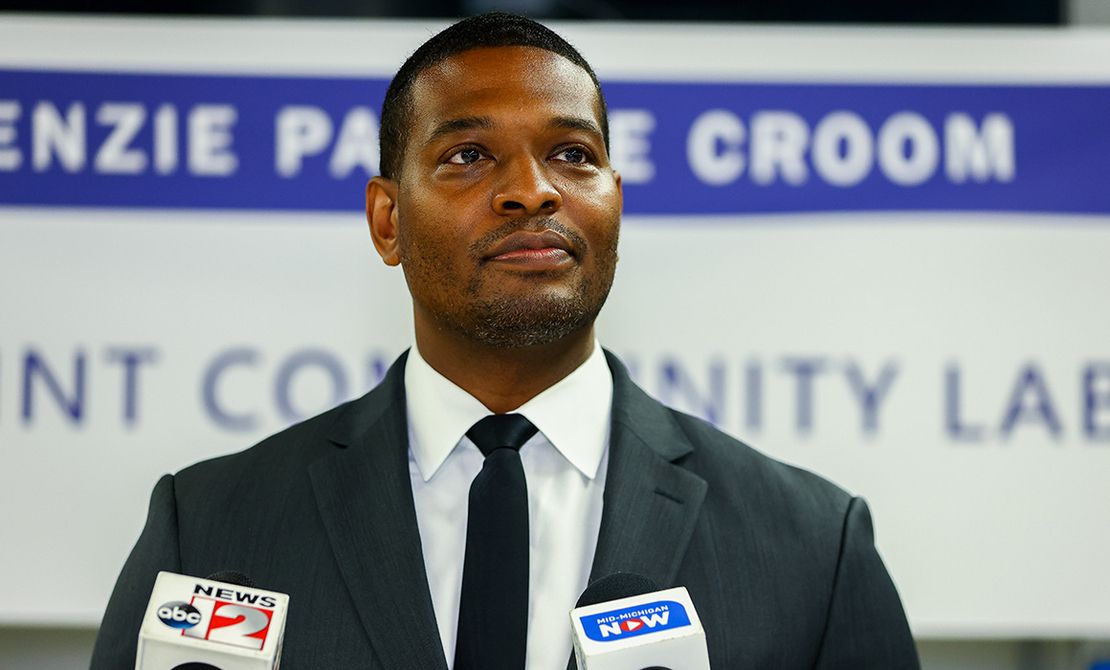 EPA Administrator Michael Regan is part of an increasing effort to crack down on PFAS and has vowed his support to local governments. Rey Del Rio/Getty Images

Lawmakers and regulators are increasingly mobilizing behind efforts to crack down on so-called forever chemicals as pressure to find a solution swells to a fever pitch.

At an inaugural conference pegged to issues around per- and polyfluoroalkyl substances, EPA Administrator Michael Regan vowed to "follow the science" on the chemicals and offer a strong federal partner to local governments.

Hosted by the Environmental Working Group, the event served as a testament to how much attention the chemicals have garnered from policymakers.

"I saw firsthand the devastating effects that PFAS has on communities," Regan said, referencing his time as North Carolina’s top environmental regulator, where he oversaw a massive deal regarding one PFAS compound, GenX.

"We will tackle this issue by working hand in hand," he said, pledging an approach spanning multiple federal agencies.

Brenda Mallory, chair of the Council on Environmental Quality, noted that PFAS contamination was one of the most prominent issues raised during her confirmation process. "The PFAS problem can feel enormous, because it is," she said, promising action from the Biden administration while pushing Congress to take more assertive action.

"Congress has a very important role, because there are aspects of the PFAS problem that could certainly be helped if there was legislation."

Multiple lawmakers used the event to bolster their case for exactly that. Legislation targeting the chemicals has ramped up this year, with multiple bills revived from the previous congressional session, including the "PFAS Action Act" (H.R. 2467) sponsored by Michigan Reps. Debbie Dingell, a Democrat, and Fred Upton, a Republican.

That bill, the most sweeping piece of PFAS legislation under consideration, would see PFOA and PFOS regulated under the Safe Drinking Water Act and designated as hazardous substances under Superfund law. Within five years, regulators would have to make a decision whether to similarly target the rest of the PFAS class (E&E Daily, June 24). While the legislation passed the House in the last Congress, it ultimately stalled in the Senate due to GOP resistance and a veto threat from former President Trump.

Proponents are hopeful that this time, fortunes have changed.

"It’s coming to the floor next week," said Dingell in her own remarks during the conference, calling on viewers to pressure their representatives for support. "We need you to help make sure we’re getting more Republican votes."

Those sites are in addition to the 2,501 sites the group previously identified as reporting industrial discharges last year. David Andrews, a senior scientist with EWG, deemed the findings "very troubling" and offered that current federal and public knowledge around PFAS releases is "woefully inadequate."

Calling EWG’s new data "a staggering increase in terms of the number of suspected sources," Pappas said the revelations were "all the more reason why Congress and the federal government need to act as quickly as possible."

EPA is already moving forward with SDWA regulations for PFOA and PFOS, in addition to mulling hazardous substance designation for those chemicals. The agency launched a PFAS council under Regan, vowing to formulate an action plan for cracking down on the substances (Greenwire, April 27).

But the Biden administration is under significant pressure to pick up the pace. "What’s amazing to me is that the EPA has known about the risks posed by PFAS for decades and done almost nothing," said actor Mark Ruffalo, who played the attorney Rob Bilott in the 2019 Hollywood thriller "Dark Waters."

In his own remarks, Bilott, who has spent the last 20 years working on PFAS litigation, argued that "the only way people have been able to get relief to this day is going into courtrooms." The process, he said, has been "incredibly difficult" and fallen disproportionately on vulnerable people struggling with contamination.

"It should be clear where the liabilities lie here," said Bilott, who urged passage of the "PFAS Accountability Act" (H.R. 2751 and S. 1334), which would help provide for medical monitoring and give communities greater assistance in their battles with chemical companies (E&E Daily, April 23).

Along with other Biden administration officials who touted the agency’s PFAS work, EPA chemicals chief Michal Freedhoff asserted her office’s efforts to gather more information about the thousands of chemicals.

"The body of data and science that we have around these chemicals isn’t as robust as we’d like it to be," Freedhoff acknowledged.

In order to fill data gaps, EPA will use its authority through the Toxic Substances Control Act to oversee a national testing strategy. With thousands of PFAS to assess, the agency will group the chemicals into subcategories based on shared characteristics. Representative chemicals from each grouping will then be tested, with the results set to impact the agency’s plans going forward.

"We’ve heard the requests from communities in North Carolina and all across the country who have been left wondering what potential impacts decades of exposures may have had on their families," Freedhoff said, in a nod to North Carolinians struggling with GenX contamination. "And we agree that the agency must do more to answer these questions, not just for some PFAS in some communities but for all PFAS found in communities across this country."

Freedhoff also announced a new stewardship plan aiming to encourage the withdrawal of certain approved PFAS. Around 600 PFAS currently have approved low volume exemptions (LVEs), meaning they were allowed to enter the market without a full pre-manufacture notice under TSCA. LVEs allow those chemicals to avoid undergoing an abbreviated 30-day review period, rather than 90 days, so long as the manufacture of those substances is limited to 10,000 kilograms annually.

EPA said in April that the agency would close gaps around LVEs and PFAS and indicated the chemicals were unlikely to qualify in future (Greenwire, April 28).

Under the newly announced stewardship program, companies previously granted LVEs for PFAS may choose to withdraw their exemptions if they will cease manufacture and importation of the chemicals.

‘We all live in Flint’

Speakers at the conference repeatedly emphasized the universal nature of PFAS exposure, which is found in the blood of most humans and has contaminated the drinking water of an estimated 80 million Americans.

For some, the issue has been exacerbated by profession.

Ed Kelly, a Boston firefighter and president of the International Association of Fire Fighters, highlighted how exposure to the chemicals through both firefighting foam and turnout gear has left his industry colleagues deeply concerned about cancer (Greenwire, July 13). Increasingly, workers in that industry are among the most vocal critics of government inaction, with many now pushing EPA and Congress to escalate their efforts.

"We’d die for strangers, we’re going to fight for each other," Kelly said.

Congressional members of the bipartisan PFAS Task Force shared how contamination within their own districts has bolstered their support for legislation. Republican Rep. Brian Fitzpatrick of Pennsylvania referenced the impacts of PFAS in his state, including in Bucks County, where contamination has been widespread.

Criticizing a "patchwork" regulatory process that has varied from state to state, Fitzpatrick expressed support for a more uniform federal approach.

Rep. Dan Kildee (D-Mich.), meanwhile, drew parallels between PFAS contamination and another infamous water crisis in his hometown. Referencing struggles with lead in Flint, Mich., Kildee commented that the prevalence of PFAS nationwide shows the extent of chemical crises beyond any single city.

"The lesson of Flint is that we all live in Flint," he said.