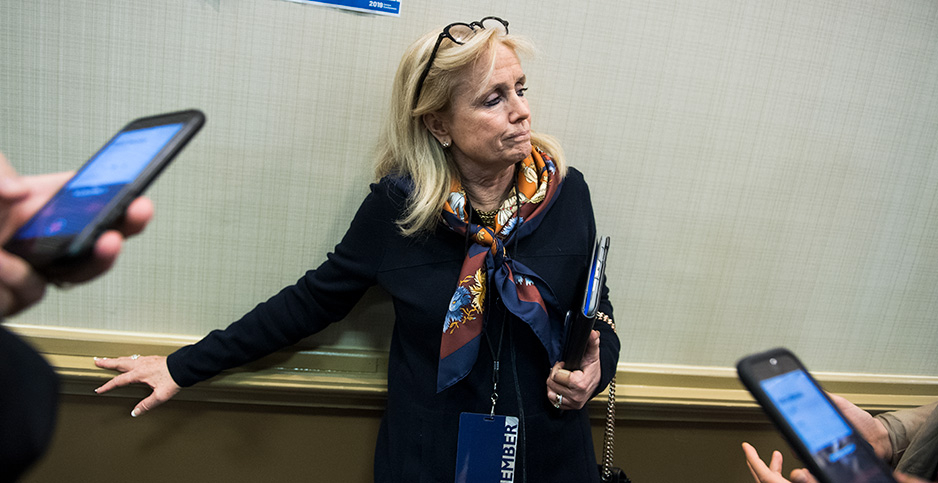 House Democrats are at odds with the White House, Senate Republicans and each other over provisions in defense policy legislation that aim to address toxic chemicals found in drinking water.

Per- and polyfluoroalkyl substances, known as PFAS, were once championed for their nonstick and water resistant properties. But the man-made substances have been linked to thyroid issues, birth defects and other health problems.

As a result of the military’s long-standing use of PFAS in firefighting foam, the House and Senate National Defense Authorization Act for fiscal 2020 includes provisions against the chemicals.

But the White House is threatening to veto the House bill over a laundry list of concerns, including the PFAS language. That drew Democratic ire yesterday and Senate pushback.

Disagreements over how to label the chemicals for the purpose of federal law is also dividing the chambers and parties.

"We have legacy contamination that will take literally decades to clean up, and we want to just stop it now," said Rep. Madeleine Dean (D-Pa.), who backed the House language.

"We know of the harmful effects [of PFAS] and this administration is just anti-clean water," she added.

The Government Accountability Office has estimated since August 2017 the Defense Department has found 401 bases with known or suspected releases of the two toxins.

The House NDAA language would prevent the Department of Defense from using them in firefighting foam and would eventually phase out the chemicals by 2025.

"DOD has concerns, however, about meeting the 2025 military specification deadline and the feasibility of waiver requirements," the White House wrote in a statement of administration policy.

DOD a ‘large part of the problem’

The other controversial PFAS provision in the House NDAA would give DOD the authority to treat contaminated water and provide supplies for farmers and their livestock or other agricultural purposes.

Dairy farmers from New Mexico to Maine have reported having to dump their milk and quarantine their cows after they found high levels of PFAS in their water supply.

Art Schaap, a dairy farmer in New Mexico near a military facility, said during a conference call that it would cost him about $2.5 million to treat the contaminated water on his farm.

But the White House said that at "potentially great cost to and significant impact on DOD’s mission, the legislation singles out DOD" as the only contributor to what is a national issue.

Sen. Tom Udall (D-N.M.) said DOD has a responsibility to clean the water the department contaminated. "DOD is a large part of the problem," Udall said.

He added if the Trump administration decides to go ahead with vetoing the NDAA, then it’s up to Congress to override the White House.

"We’re going to keep fighting this all the way," Udall said. "I do believe there is good, solid bipartisan support."

But the White House will likely get its way. The Senate NDAA includes language on PFAS, including to require EPA standards, that enjoys bipartisan support.

"Rather than seek similar compromise, House Democrats are proposing to saddle local airports, farmers and ranchers, water utilities, and countless small businesses with billions of dollars in liability," said Barrasso.

Another Democratic push that is angering Republicans is wanting to add "toxic" and "hazardous" levels to PFAS.

A proposed amendment to the House NDAA from Rep. Chris Pappas (D-N.H.) would list PFAS as toxic under the Clean Water Act. Rep. Debbie Dingell (D-Mich.) has another one to require a hazardous designation under the Superfund law.

The House Rules Committee earlier this week failed to make Dingell’s amendment in order for floor debate, but leaders said it was a mistake. It will likely pass as soon as today.

Sen. Shelley Moore Capito (R-W.Va.) said the amendment needed more work. "It’s got some very broad tentacles, and I think both Sen. Carper and I both agreed to continue to work on it," she said.

Barrasso said of the House drive to add what he sees as offending language: "This is what happens when the House rushes legislation and ignores the committee process."

Indeed, some House members may agree. The Energy and Commerce Committee has long talked about crafting a PFAS package (E&E Daily, June 28). But the NDAA may be the best vehicle for legislation on the chemicals.