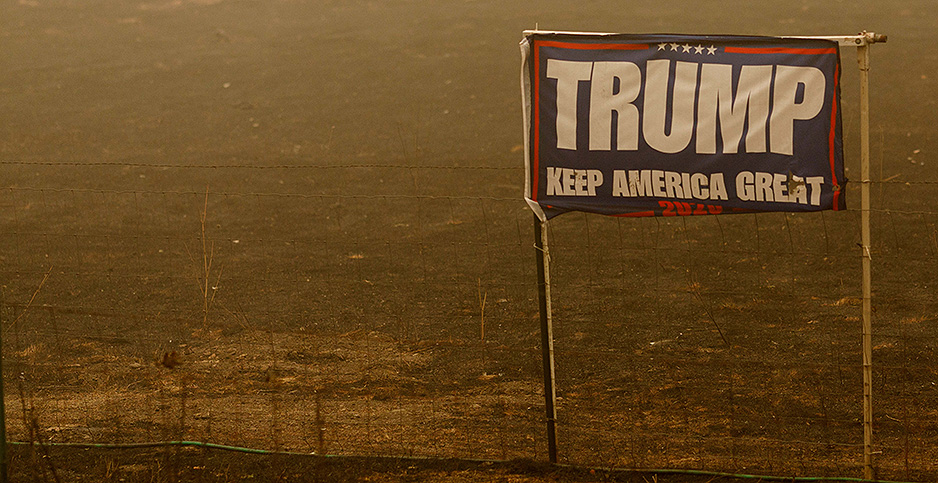 A sign in support of President Trump in a wildfire-affected area along Route 22 near Mill City, Ore. John Rudoff/Sipa USA/Newscom

Democratic lawmakers and left-leaning advocates are piling on against President Trump’s response to wildfires raging in California and Oregon, accusing him of ignoring the climate connection and missing the point on forest management.

On Capitol Hill, lawmakers on both sides of the aisle are also renewing calls for additional wildfire prevention and response legislation.

"Fire is inevitable," Wyden said in speech on the Senate floor, noting its role in the natural cycle of Western forests. But Congress can do more to prevent catastrophic blazes, he said, with increased funding and stepped-up conservation efforts.

Wyden used the speech to tout his own legislation, called the "21st Century Conservation Corps for Our Health and Our Jobs Act," which would create a job-training and employment program to help clear forests of potential wildfire fuel, among other provisions. And he criticized voices on the far ends of the debate on forest policy.

Wyden’s S. 3684 is one of a few proposals that are likely to gain new attention in a record year for Western wildfire.

He said he has more legislation to propose soon, and a Senate Energy and Natural Resources subcommittee has a hearing tomorrow on a bill, S. 4431, from Sens. Steve Daines (R-Mont.) and Dianne Feinstein (D-Calif.) promoting forest management and retrofitting of homes for wildfire protection (E&E Daily, Sept. 14).

"I am sure the rhetoric from the far left today, and Democrats not willing to work together during an election year (sad), will focus on one thing and one thing only: climate change," Daines spokeswoman Katie Schoettler wrote in an email to reporters yesterday.

"So I wanted to highlight how the Daines/Feinstein forestry bill does in fact recognize climate change and [its] impact on wildfires — but more importantly, it offers 50+ pages of comprehensive SOLUTIONS to actually reduce the risks of severe wildfires," she wrote.

Beyond that bipartisan measure, Wyden said, federal funding for wildfire prevention is woefully short, compared with a $3 billion fire suppression fund Congress authorized a few years ago to end "fire borrowing" within the Forest Service budget.

"Virtually all of Oregon is now choking on smoke," Wyden said. "I and everybody else had smoke up to our eyeballs."

Now is the time, Wyden said, for the Senate to change the way forest policy is made. "The climate crisis is here. Right now. Today," he said.

He criticized Trump’s approach, which he said minimizes the pain Western states are facing, but said some environmental groups aren’t being helpful either by blocking any forest work that might reduce material that can fuel big fires.

Wyden singled out Trump for telling Western leaders the weather will cool off on its own and repeatedly referring to "explosive trees."

And the timber industry, Wyden said, has sometimes misplaced its priorities on attacking environmental laws.

Without action after the wildfires, Wyden said, he worries that unstable soil will erode and contribute to flooding next spring with rain and snowmelt, "as sure as the day follows the night."

And fire can be a friend, he said, if the federal government encourages prescribed burns in the offseason, when it’s less likely to spread out of control.

Wyden addressed the Senate shortly after Trump spoke in Sacramento, Calif., and after Democratic presidential candidate Joe Biden hammered the president in a speech, saying, "We need a president who respects science" (E&E News PM, Sept. 14).

Trump said he sees the wildfire crisis as a management matter, sidestepping the conversation about climate change, and urged a more intensive approach to thinning forests (E&E News PM, Sept. 14).

"I think this is more of a management situation," Trump told reporters in Sacramento, where he met with state and local officials.

The California League of Conservation Voters released a video criticizing Trump’s claim to be "the great environmentalist."

"While California burns and is faced with the worst air quality in the world for over a week now, the President is spewing more lies about his environmental record and the climate crisis," said Mary Creasman, CEO of the California LCV, in a news release.

"But Californians know this crisis is real, we are feeling the tragic reality of government on all levels kicking the can down the road for years," she said.

Wildfires raging across the West will also factor into next week’s House debate on a clean energy package (Greenwire, Aug. 31).

"My state is on fire," Rep. Suzan DelBene (D-Wash.) told reporters yesterday on a conference call. "Air quality has reached hazardous levels and still is at incredibly high levels in our communities."

DelBene, a vice chair of the New Democrat Coalition, said she expected the upcoming package to include some policies from a list of climate bills the moderate group of lawmakers pitched to House Democratic leaders in July (E&E Daily, July 29).

Speaking to reporters shortly after Trump disavowed the role of climate change in the historic fires raging in the West, DelBene pointed to the recent slate of extreme weather events and the warming atmosphere.

"We need to connect the increased frequency and strength of these wildfires, along with severe flooding in the Midwest and hurricanes on the east coast as directly linked to a rapidly changing climate," she said.

"Addressing climate change for the longest time has been framed as keeping the planet safe for the next generation," DelBene said. "But it’s also about keeping things safe for our generation."

The timing of a floor debate on the House energy package is unclear, but the bill is expected to be filed with the Rules Committee as early as today.