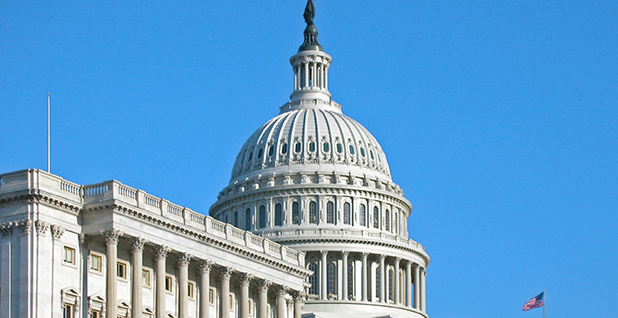 Appropriations talks lead the congressional agenda for the week. UpstateNYer/Wikipedia

Congress is expected to temporarily put off a funding fight this week that could have forced agencies, including EPA and the Interior Department, to shutter as the nation mourns the late President George H.W. Bush.

Congressional leaders are hoping to put off a partial government shutdown ahead of Friday’s deadline by passing a one- to two-week continuing resolution.

The House canceled votes for today and tomorrow to honor Bush, who will lie in state in the Capitol Rotunda starting tonight. The Senate won’t vote until at least Wednesday.

The reprieve will give negotiators more time to hash out a year-end spending deal but also would push the deadline closer to Christmas, raising the stakes for talks the longer they drag on.

President Trump told reporters over the weekend he would "probably" sign off on the extension if Congress asks for it.

A year-end spending deal remains the top item on Congress’ to-do list as it tries to wrap up the lame-duck session. A tax package containing renewable energy extenders and a possible lands package are also the subject of frenetic, late-session negotiations.

With almost a quarter of the House not coming back in January, lawmakers are eager to wrap up work as soon as possible. Neither party wants to push the fight into next year.

Lawmakers are eyeing an omnibus that would contain all seven of the unfinished fiscal 2019 spending measures, including Interior-EPA, Commerce-Justice-Science, Homeland Security, Transportation-HUD and State-Foreign Operations. Several spending bills, including for Energy-Water, were signed into law before Election Day.

But those negotiations have been hobbled by the White House’s insistence that the bill contain $5 billion in funding for border wall security sought by Trump. Appropriators have said the other spending bills are ready to move, devoid of most controversial riders, once the border funding fight is resolved.

Senate Appropriations Chairman Richard Shelby (R-Ala.) said last week that negotiators "have many floating ideas to try to get to the $5 billion" sought by Trump.

He said appropriators have been eyeing past unspent dollars, but he indicated that whatever additional border security funds are added to the current $1.6 billion in the Senate’s Homeland Security bill would be "new money."

He acknowledged opposition from Senate Democrats, whose support will be needed to get 60 votes for any compromise.

Senate Minority Leader Chuck Schumer (D-N.Y.) last week said the president could throw a "temper tantrum" and shut down government but noted there are two more sensible options on the table. Schumer said Trump could accept $1.6 billion in border wall spending that has bipartisan support or simply extend Homeland Security at current levels and move the other six bills until a deal is reached.

House Freedom Caucus Chairman Mark Meadows (R-N.C.) predicted there will be a "real battle coming" on border wall funding, but he stopped short of predicting a shutdown.

"If the border wall funding is not there, it does increase the likelihood of impasse that could lead to a shutdown," Meadows told reporters Friday. "But at this point I would venture to say it would be more short-term CRs than shutdown."

But Sen. Dianne Feinstein (D-Calif.), the ranking member on the Senate Energy-Water Appropriations panel, said last week she is still pushing an interim nuclear waste storage plan in return for funding for Yucca Mountain in fiscal 2019. "They want money for Yucca, but I think that’s a problem," she told E&E News.

The prospect of Yucca funding in the spending bill has caught the attention of Nevada’s Democratic lawmakers, including Sen. Catherine Cortez Masto and Sen.-elect Jacky Rosen.

In a letter to Senate leadership along with Energy-Water Appropriations top members, the two lawmakers urged the chamber to keep any new Yucca appropriations out of the spending bill. They noted the Energy-Water bill is among those already signed into law.

"If Yucca has taught us anything, it is that forcing a repository on an unwilling state only gets the nation further away from a workable and safe solution," the duo wrote.

Nevada lawmakers on a bipartisan basis have long opposed the proposed Yucca Mountain site, noting safety concerns with the storage and disposal of waste that can stay radioactive for tens of thousands of years. Using those concerns, the Obama administration determined the site was "unworkable" and moved to shutter it in 2010.

A short-term CR may also provide more time for negotiations on tax issues, including extensions of an assortment of lapsed energy incentives.

Those breaks would have been extended retroactively for 2018 under a House tax package that was pulled from the schedule Friday, after leaders determined they didn’t have the votes to pass it (Greenwire, Nov. 30).

Part of the problem was a lack of Democratic support and fears that outgoing House Republicans would not show up to vote on the measure.

But there are also substantive concerns with the bill, including a coal production tax that helps pay for black lung disease benefits. Advocates want to see a longer-term extension of the tax, but industry and allied lawmakers oppose the one-year provision in the bill (E&E Daily, Nov. 30).

Affected industry sectors and many Democrats want to see longer extensions of the other energy breaks as well.

And although House Ways and Means Chairman Kevin Brady (R-Texas) said last week the electric vehicle tax credit won’t be altered or extended during the lame duck, outside interest groups opposed to the break continue to pressure the Hill on the issue.

Democrats are keen to see the break expanded, but some Republicans are wary of doing so after Trump suggested he’d like to see the break limited toward General Motors Co. in retribution for the company’s plan to close several U.S. plants.

Pressed on the many objections, Brady on Friday told reporters he planned to spend the weekend drumming up support for the tax package. The package’s fate will depend on those talks, he added.

Congress also could finally agree to renew the Land and Water Conservation Fund before leaving town.

The deal likely will include several other more parochial bills in a stand-alone public lands package or be incorporated into a larger vehicle.

For instance, bipartisan, bicameral legislation that would ban mining north of Yellowstone National Park in Montana is one measure likely to end up in a public lands package.

The final version of the LWCF bill is unlikely to include full funding for the program, Bishop said, a provision in the Senate legislation (E&E Daily, Nov. 30).

The Utah Republican said that if the mandatory spending stays in the final version, "I cannot find the offset, there is no way of doing it, that makes everything dead. That’s the bottom line."

A bicameral bill to create a $6.5 billion fund to improve maintenance at national parks, however, is not expected to make it into the public lands package.

Republican and Democratic supporters have acknowledged it’s a heavy lift because budgeting rules require the measures to be offset with either revenue increases or cuts in federal spending elsewhere.