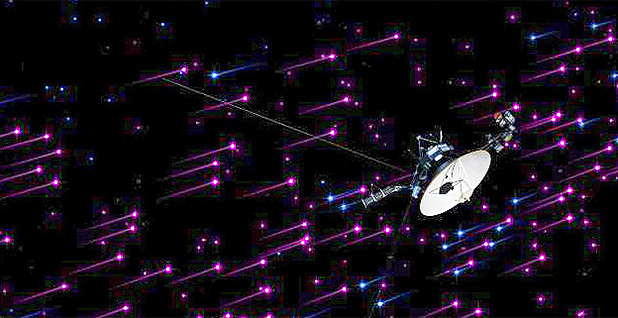 Lawmakers are remaking NASA in order to leave parts of the agency’s earth science program untouched but remove its climate change research.

It’s still unclear exactly how lawmakers plan to transform NASA’s mission, but Republicans and Trump administration officials have said they want the agency to focus on deep-space missions and away from climate change research, which is a part of its Earth Sciences Division. That has created uncertainty about the fate of the Earth Sciences Division, which accounts for about $2 billion of NASA’s $20 billion budget.

At a House Science, Space and Technology Committee hearing yesterday, Chairman Lamar Smith (R-Texas) said he wants a "rebalancing" of NASA’s mission. The lawmaker told E&E News he wants the agency to reprioritize its mission because the Obama administration cut space exploration funds.

Specifically, that could mean NASA’s work on climate change would go to another agency, with or without funding, or possibly would get cut. Smith and other Republicans avoided laying out specifics but acknowledged that earth science at NASA would likely face some significant changes in the near future.

"By rebalancing, I’d like for more funds to go into space exploration; we’re not going to zero out earth sciences," he said. "Our weather satellites have been an immense help, for example, and that’s from NASA, but I’d like for us to remember what our priorities are, and there are another dozen agencies that study earth science and climate change, and they can continue to do that. Meanwhile, we only have one agency that engages in space exploration, and they need every dollar they can muster for space exploration."

A reauthorization bill could pass the Senate as soon as today and would allow President Trump to introduce a fiscal 2018 budget request that could allow the administration more input on NASA, Smith said.

“I’d like for more funds to go into space exploration; we’re not going to zero out earth sciences.”

The Earth Sciences Division at NASA is far broader than climate change and provides invaluable weather information relied upon by businesses across the globe. Earth science has been an essential part of NASA since its inception, and the division collects data from satellites, analyzing it and distributing it to government agencies, universities and the public. NASA currently has more than a dozen earth science satellites in orbit studying oceans, the atmosphere and the biosphere, and more are planned in the coming years. The National Oceanic and Atmospheric Administration, which is where some Republicans want climate change research to be centered, does not have the same ability to develop the satellites that monitor the planet.

The earth science budget at NASA has been flat for more than 20 years, said Ellen Stofan, the agency’s former chief scientist. She said NASA builds satellites that study the oceans, agriculture, the weather and other key facets of everyday lives.

Rep. Don Beyer (D-Va.) said he expects that climate research could be targeted by Republicans in the budget reauthorization, especially since previous Republican proposals called for shifting climate change away from NASA to U.S. EPA or other agencies. But that just included moving the responsibilities of the NASA climate work to EPA without any extra funding, he said. Beyer said it’s clear that the GOP is targeting research because it doesn’t like the information it imparts, and that he expects it will soon come after NASA’s climate change work.

"I think it’s entirely possible, with unitary power from a party that doesn’t think climate change is real, or if it is real, we can’t do anything about it," he said.

A number of the witnesses at the House committee hearing, most invited by Republicans, expressed a desire to increase NASA’s push toward deep space and manned missions. Harrison Schmitt, an Apollo 17 astronaut and a former Republican senator from New Mexico, criticized the agency’s direction under President Obama and said the agency should be focused on space.

"Many of the things NASA does are really in the purview of other agencies, and I think that ought to be examined very closely by this committee, which has responsibility for several agencies, not just NASA," Schmitt said. "Just because you start to focus on the moon, Mars or deep space doesn’t mean these programs have to go away; they can be taken under the umbrella of other agencies, and that ought to be looked at very carefully."

Rep. Jim Bridenstine (R-Okla.), who confirmed that he is the running to become NASA administrator, said he is open to moving part of the earth science study out of the agency and into NOAA, or even swapping a few programs between the two agencies. He was generally supportive of the earth science but did not commit to keeping climate research at NASA.

"I support earth science; it is critically important for us as a nation to understand what is happening on our own planet, so I think there is broad consensus, bipartisan, that earth science is important," he said.

The changes to NASA are likely not going to be introduced in the reauthorization bill that will come soon, but could be introduced in the near future, said Bob Walker, a former Pennsylvania Republican congressman who drafted the Trump administration’s space policy and is actively involved in the deliberations.

"I think we will probably have the earth science programs under this authorization maintained exactly where they are, so the question, then, is whether or not you then have accepted a bifurcated NASA mission profile that in the past has consigned us for three decades of not moving humans out of low-Earth orbit," he said.

Walker said the direction of NASA can be changed in the near future, particularly if the Trump administration or a national space council wants a renewed focus on deep space.