Lawmakers gear up for another round in ANWR fight 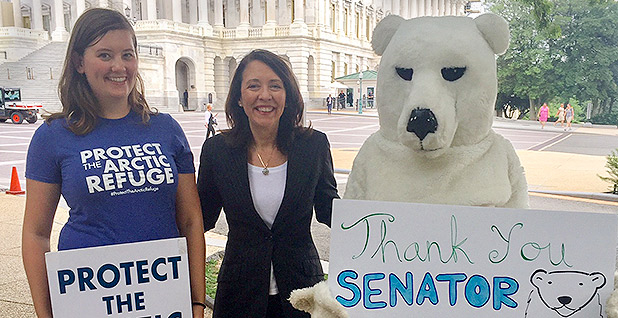 Lawmakers are girding for renewed battle over oil and gas drilling in Alaska’s Arctic National Wildlife Refuge, after House Republicans unveiled their fiscal plan this week.

The leadership of the House and Senate authorizing committees with jurisdiction over the issue weighed in yesterday on language included in the lower chamber’s fiscal 2018 budget resolution (Greenwire, July 18).

The House Budget Committee’s measure, which the panel marked up yesterday, directed the House Natural Resources Committee to come up with $5 billion in savings over the next decade (see related story).

Many conservation groups, including the Wilderness Society and the Alaska Wilderness League, believe the provision represents a push to use budget reconciliation to fast-track drilling in ANWR, a longtime priority of the Alaska congressional delegation and a crucial component of the Trump administration’s "energy dominance" agenda.

Budget reconciliation is an expedited maneuver that allows certain budget and fiscal matters to pass by a simple majority in the Senate.

"I am disappointed, but not surprised, that the House Republican budget includes a proposal to drill in the Arctic National Wildlife Refuge," Senate Energy and Natural Resources ranking member Maria Cantwell (D-Wash.) said yesterday.

"We have seen this story before — every Republican administration and every Republican-majority Congress has tried to turn over this iconic national wildlife refuge to the oil and gas industry," she said, adding that previous proposals "to destroy this pristine Arctic ecosystem for the benefit of oil and gas companies have failed."

Cantwell, who led a successful filibuster in 2005 opposing efforts to allow drilling in ANWR, pledged yesterday to continue the fight this time around.

"If House Republicans insist on passing a partisan budget that includes drilling in the Arctic National Wildlife Refuge, I will do everything I can to ensure it meets the same fate in the Senate as their failed health care bill."

Both of Alaska’s Republican senators signaled yesterday that given the opportunity, they’ll push to use the budget reconciliation process to open ANWR to drilling.

"As I understand, [the House Natural Resources Committee] can be tasked to write their bill to meet those instructions, and when it comes to that point, when the Senate will be able to do the same, I think, on energy, we’d look forward to doing that," said Energy and Natural Resources Chairwoman Lisa Murkowski.

Sen. Dan Sullivan (R-Alaska) said he is "absolutely" pushing for ANWR to be opened using reconciliation, noting that doing so was included in the Trump administration’s fiscal 2018 budget request.

Acknowledging that Senate Republicans have been focused on health care in recent weeks, he predicted "enthusiasm" for opening ANWR. "It’s also a revenue generator, which, when you look at tax reform, we need it," Sullivan said yesterday.

A question with no answers

But it’s still not clear — even to the head of the House Natural Resources Committee — how the reconciliation instructions will play out in that chamber.

Chairman Rob Bishop told reporters yesterday that he didn’t know yet whether the $5 billion in savings the budget resolution instructed his panel to find would be achieved by opening up ANWR to energy exploration.

"I have no idea, I’m sorry," the Utah Republican said outside the House chamber. "Actually, it’s a legitimate question; you deserve an answer. I have no clue of what answer even to fake for you," Bishop joked.

The chairman, however, said he would like some of that $5 billion in savings to come from ANWR oil and gas drilling revenues, and elsewhere, though he did not elaborate.

President Trump’s budget proposal assumes cost savings of $1.8 billion over the next decade by allowing oil and gas drilling in ANWR starting in 2022.

The $5 billion figure ostensibly comes from an August 2012 Congressional Budget Office report that estimated the government would collect roughly that much over 10 years from opening ANWR to energy development, "primarily in the form of bonus payments made by private firms for the opportunity to explore for and develop resources in particular areas."

But Natural Resources ranking member Raúl Grijalva (D-Ariz.) said the $5 billion CBO estimate was based on a now "flagrantly outdated" price of oil, and that under current law, Alaska would receive 90 percent of the royalties from any drilling in ANWR.

"The majority is telling this committee to generate billions of dollars based on outdated estimates of policies we’re not going to enact anyway," Grijalva said yesterday.

"It’s like writing a budget on the back of a bounced check. Building out sustainable energy sources and conserving our natural open spaces is a more profitable, more popular path forward than drilling for oil in a wildlife refuge."