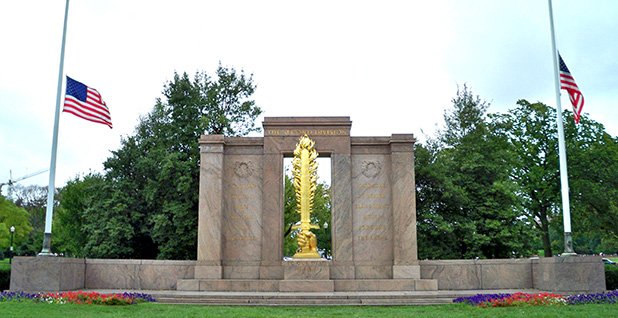 A capital city already stuffed with memorials and proposals for more would gain an additional commemorative plaque honoring 19th-century Texas diplomats, under a new bill that’s both straightforward and symbolic of a larger trend.

Introduced by Rep. John Culberson (R-Texas), H.R. 6672 would authorize a plaque to be designated as the Republic of Texas Legation Memorial. The simple shoutout would be set somewhere within Washington, D.C.

The legation represented Texas interests in Washington from 1836 to 1845, when the onetime republic became a state.

More broadly, the proposed plaque that’s backed by the Daughters of the Republic of Texas underscores how lawmakers working through the House Natural Resources Committee and its Senate counterpart use D.C. memorials as a way to honor constituencies and causes.

Often, the memorial proposals carry a mom-and-apple-pie appeal against which resistance might seem churlish. Nonetheless, the proposals can also take years to ripen.

The Vietnam Veterans Memorial Fund, for one, is still raising the roughly $130 million needed to build an underground visitor center at the National Mall. Congress authorized the center back in 2003, amid concerns about monumental congestion.

"The Mall is becoming a crowded urban area, rather than the Mall it was meant to be," Del. Eleanor Holmes Norton (D-D.C.) said in a 2003 House debate, adding that "political pressures are making our Mall a place where our generation is using up all of the space."

The preparatory work has since trudged on about as long as the Vietnam War itself, prompting Sen. Steve Daines (R-Mont.) to introduce a bill to extend the visitor center’s necessary authorization for another four years, until 2022.

Work on a much-altered and much-criticized Dwight D. Eisenhower Memorial, meanwhile, grinds on, nearly 20 years after Congress authorized it in 1999 (Greenwire, Nov. 1, 2017).

"At last, at last, we’re building at last," Republican Sen. Pat Roberts of Kansas declared at the memorial’s November 2017 groundbreaking.

Citing "cost increases, construction delays and design problems," the House Natural Resources Committee had previously blasted early iterations of the $140 million-plus memorial in a 2014 report as a "Five-Star Folly."

A Gold Star Mothers Family Memorial authorized by Congress in 2013 is also in the works, honoring women who have lost children in war.

And last month, the Commission of Fine Arts endorsed an updated design for a National World War I Memorial to be located at the existing and often-ignored 1.8-acre Pershing Park near the White House. Originally set for 2018, memorial completion is now pegged to 2020.

"The fundamental problem is how to insert a new work of art within an existing work of art," the commission noted earlier this year.

The proposed Texas Legation Memorial would honor the "representatives of the Republic of Texas, [who] served in the District of Columbia as diplomats to the United States and made possible the annexation of Texas as the twenty-eighth state of the United States," according to the bill.

Funding for the plaque would be provided by the Daughters of the Republic of Texas.