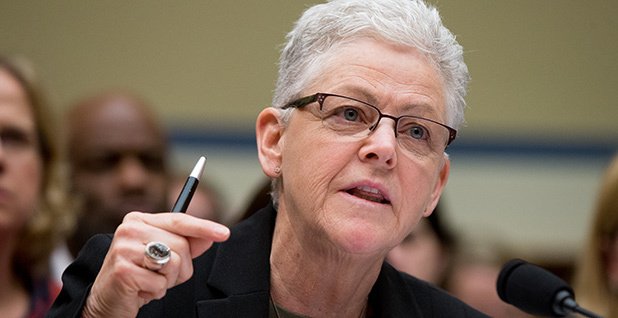 U.S. EPA Administrator Gina McCarthy stood by her words yesterday, insisting to angry GOP lawmakers that the market, not climate regulations, is the reason for job losses in the coal industry. Photo courtesy of AP Images.

During a hearing of the Senate Environment and Public Works Committee on EPA’s fiscal 2017 budget, Republican senators asked a series of pointed questions regarding recent comments McCarthy made in which she said, "I can’t find one single bit of evidence that we have destroyed an industry or significantly impacted jobs other than in a positive way" (ClimateWire, April 14).

After reading the quote to the EPA administrator, Sen. John Barrasso (R-Wyo.), who represents a state that in recent weeks saw a major coal company declare bankruptcy and layoffs affecting hundreds of miners, said, "I don’t know what you are talking about. I hear it every day back in my state, in Wyoming … how EPA regulations are destroying the coal industry.

"Are you going to tell the laid-off coal miners in Wyoming, in West Virginia, in Kentucky that you take no responsibility whatsoever for what is happening in coal country?" Barrasso asked.

McCarthy replied, "I think our responsibility is to make sure that when the energy system is shifting as it is in the market today, that we do everything we can to help those communities and those folks be able to cope with a shift in the economy and in the energy system that we are seeing.

"I believe that the energy system has been shifting since the ’80s, and it is time that we work with those communities and individuals to make sure that everybody in the United States has an opportunity to live well," McCarthy said.

"There are challenges in those communities, without question, but the vast majority of that is related directly to the market shift, not to EPA regulation," she added.

Later, in reply to questioning on the same statement by Sen. David Vitter (R-La.), McCarthy said, "Very often, companies make decisions on the basis of their larger economic benefits and costs, and very often they will point to an EPA rule to justify that decision when there are many other issues going on that actually account for that decision more directly."

Democratic lawmakers were quick to come to EPA’s defense, also citing market forces as the main driver of coal’s decline.

"I do believe that it’s been reported in a variety of forums that the war on coal is actually waged and won by the natural gas industry," said Sen. Sheldon Whitehouse (D-R.I.).

"The more that Wyoming coal pollutes, the more that we experience these changes in Rhode Island," Whitehouse said, citing changes in his state’s fisheries that have been linked to warming oceans.

Sen. Ed Markey (D-Mass.) echoed Whitehouse’s remarks, saying to McCarthy, "I know that there are still those that believe that you are the principal person responsible for this shift in the energy generation in our country … but we know that natural gas, because of fracking, has just become a plentiful … alternative means of generating electricity in our country, and we know that it has half of the greenhouse gases that coal does, and we also know that it is very competitive, if not less expensive, than coal."

"If you can’t breathe, you can’t work. Let’s be clear," Boxer said. "And if you die prematurely, you surely can’t work, because you are dead."

The agency has been tight-lipped about this issue following the Supreme Court’s decision to stay the regulation in February, saying only that the September 2016 deadline for initial state compliance plans no longer applies.

Many states are proceeding with planning for the rule despite the Supreme Court stay, and some EPA supporters argue there is no guarantee that states won’t be required to begin making emissions reductions in their power sector by 2022 (ClimateWire, March 24).

McCarthy reiterated EPA’s position that the agency is unable to speak to the rule’s deadlines until the litigation against the Clean Power Plan is resolved.

"The Supreme Court didn’t actually speak to any of the tolling issues regarding the compliance requirements — we certainly know that the issue will not be resolved by this coming October and September," McCarthy said. "Beyond that, the courts are going to have to speak to that issue."