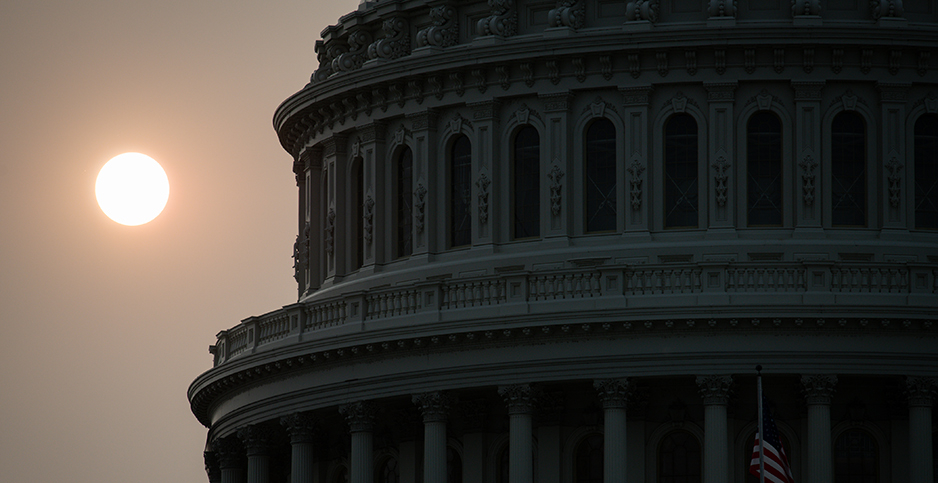 A haze over the U.S. Capitol this week tied to smoke from wildfires in Western states. Graeme Sloan/Sipa USA/Newscom

Sen. Martha McSally (R-Ariz.), who is in the midst of a tough election campaign back home, has a solution to addressing the wildfires ravaging Western states: converting dead trees and brush that don’t have much timber value into energy.

Her legislation, S. 4603, would create a fund from logging revenues to help timber operators and energy companies harvest and move biomass material out of areas where they pose a heightened wildfire risk.

The "Forest Health and Biomass Energy Act" also calls on the Department of Agriculture, which oversees national forests, to report annually on the biomass fuel potential on those lands.

Additionally, USDA would be required to include wood biomass-energy harvest targets in annual budget submissions to Congress.

McSally said her bill would ease regulatory hurdles, something the biomass industry says could help clear forests of potential fuel for wildfires.

Citing the "crushing cost" of removing such material from national forests, McSally said during a Senate Energy and Natural Resources Committee hearing Wednesday that she is aiming to reduce that expense and create new incentives.

The material at issue are small trees, brush and leftovers from logging operations, which forest managers say can add to the intensity of wildfires. California is also grappling with more than 150 million dead trees in the state, thanks to insects and disease, which officials say are hard to make marketable and only add to the threat.

After a heyday in the early to mid 1990s, the biomass energy industry has been in decline. California alone has lost more than half of its biomass facilities since then (Greenwire, Sept. 15).

The industry is counting on allies like McSally to help revive it.

One bright spot, biomass supporters say, is the Trump administration’s position that biomass is carbon neutral in certain uses, making it more attractive as a climate-friendly energy source. Southeast forest owners have continued to benefit from European demand for wood pellets used in energy production.

Many environmental groups dispute the carbon benefits. In addition, some researchers question whether the scale of forest thinning that the industry’s boosters support would reduce wildfires without harming natural habitats (Greenwire, Aug. 7, 2018).

Biomass has a minor role in Arizona’s electricity generation, according to the U.S. Energy Information Administration. The state has one wood pellet manufacturing plant, a 28-megawatt facility northeast of Phoenix, owned by Novo BioPower.

Yesterday, three Democratic senators introduced legislation to encourage use of prescribed burns in forests where fire is part of the natural cycle, in order to clear vegetation in a way that mimics nature.

Sens. Ron Wyden of Oregon, Joe Manchin of West Virginia and Maria Cantwell of Washington proposed the "National Prescribed Fire Act," which would create accounts of $300 million at the Interior Department and Forest Service for use of prescribed burns.

It would require the agencies to increase the number of acres treated and provide incentives for state and local agencies to conduct large controlled burns.

"Good forest science is good climate science," Wyden said in a news release. "Burning more when it’s safe in the off seasons will save us a lot later by preventing catastrophe in the summer and fall."

Prescribed burning is practiced more routinely in other parts of the country, such as the Southeast, and has been harder for public officials to adopt in the West, forest policy groups and researchers say.

During the COVID-19 pandemic, the Forest Service has cut back on the practice because of concerns about the effect of smoke on people with respiratory troubles. Otherwise, the agency has been looking for ways to use it more.

The proposal won praise from environmental and conservation groups. Still, forest researchers say the timing of prescribed burns is a balancing act, with spring and fall being better than winter, according to some studies (Greenwire, April 26).